Ontario women’s and men’s teams continue their impressive home-province run at the 2017 Travelers Curling Club Championship in Kingston. Skip Jodi McCutcheon and second Kelly Williamson have been in this position before, going undefeated through the same event six years ago before losing the final against Manitoba in Richmond, B.C. 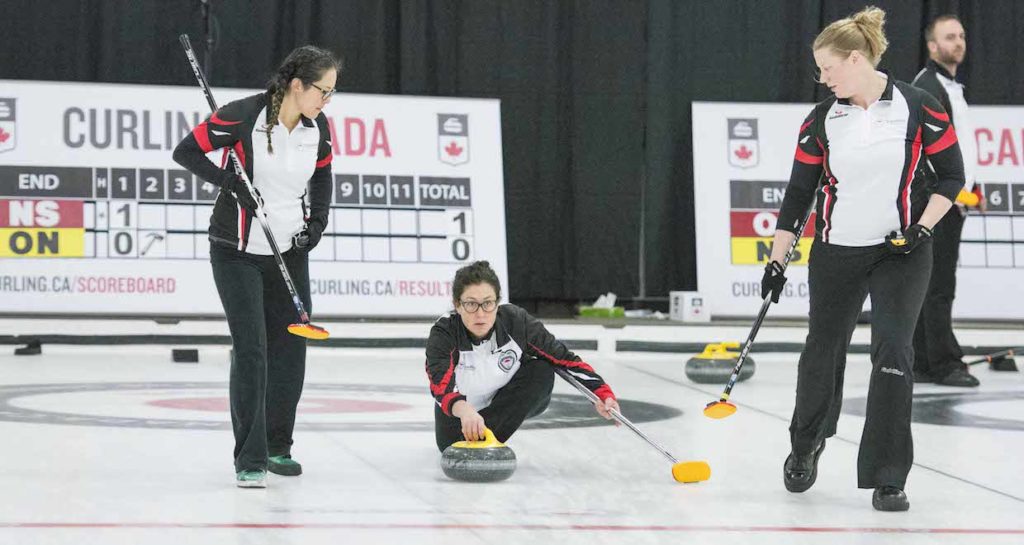 “I think I’m a little more calm and relaxed than I was in B.C. with a bit more experience curling under this sort of pressure now,” said the skip out of the High Park Curling Club in Toronto after she improved to 3-0 on Wednesday afternoon.  The Ontario team secured a 5-4 win over Nova Scotia (1-2) by hitting the 12-foot on their final shot of the eighth end. Does she feel added pressure wearing the home province colours at the Cataraqui Golf and Country Club?  “It’s actually more comfort than pressure. I don’t feel any extra pressure but definitely feel the support.” McCutcheon along with third Kris Wannan, Williamson and lead Susan Chen have over a dozen family and friends in Kingston hoping to see Ontario win a record fourth women’s Travelers title (2009, 2012, 2014). Richmond Hill’s Jon St. Denis echos McCutcheon’s sentiments that playing close to home has perks.  The Ontario men’s skip and his rink of third Steven Anderson, Jordan Keon and lead Curtis Samoy have rhymed off three straight wins in their first three games of the six-game round robin. St. Denis has two other Ontario curling banners with his name on them but this is the first time he’s advanced to the national stage. “I actually told my wife I was going to step back from the game last season but when we started to get on a roll in our zone we sort of surprised ourselves and here we are with a lot of support around us,” St. Denis said after getting past previously undefeated Nova Scotia (3-1). 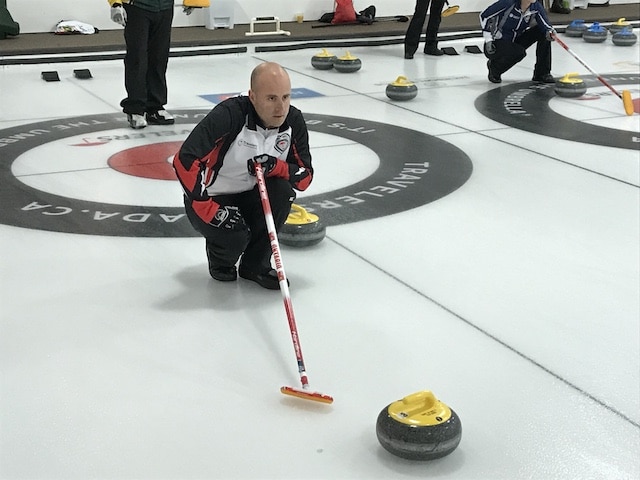 Through Draw 9 of the Travelers Curling Club Championship both Ontario teams sit atop their respective pools in an event that features the top club curlers in the country. All 14 of Curling Canada’s Member Associations (10 provinces, three territories and Northern Ontario) are represented in both genders. Each team is allowed only one player who has played in a provincial/territorial Juniors’, Men’s (Brier), Women’s (Scotties) or Seniors’ championship in the current or previous four curling seasons, or participated in a full-field Grand Slam event in the current or previous four curling seasons. As well, no player on the teams can have played in a Canadian Juniors, Men’s, Women’s or Seniors national championship in the current or previous four seasons. Standing in Ontario’s way of the playoffs in women’s Pool A is Manitoba’s Stacey Fordyce (3-1).  The Brandon rink will play McCutcheons on Thursday at 7:30 p.m. ET.  Newfoundland and Labrador, Quebec, Nova Scotia and New Brunswick are all 1-2 after nine draws in Kingston.  Yukon’s record is 1-3. British Columbia’s Kimberly Dennis, Prince Edward Island’s Julie Mutch and Alberta Nanette Dupont’s rinks lead Pool B women’s play, each with one loss through the first nine daws. Saskatchewan and Northern Ontario are both at 2-2. Northwest Territories sits at 1-3 while Nunavut (0-5) seeks their first win in Pool B. Nova Scotia and Manitoba are close on Ontario’s heels in men’s Pool B with each having one loss through the first nine draws.  Northern Ontario’s Jeffrey Brown sits at 2-2.  Yukon (1-2), Northwest Territories (1-3) and Prince Edward Island (0-3) round out the Pool B leaderboard. British Columbia’s Bart Sawyer continues to roll through the competition in men’s Pool A with a 4-0 record through nine draws.  Alberta and Newfoundland and Labrador each have one loss with Saskatchewan hanging in the playoff picture with a 2-2 record.  Quebec (1-3), New Brunswick (1-3) and Nunavut (0-5) round out Pool A standings. Selected games from the 2017 Travelers Curling Club Championship are live-streamed at www.curling.ca/2017travelers/ Scores and standings from the event are available at www.curling.ca/scoreboard. For draw times, team lineups and other event info, go to: www.curling.ca/2017travelers/