Koe crew atop Tim Hortons Roar of the Rings standings

OTTAWA – Kevin Koe walked away from his final shot in the extra end fully expecting his opponent, 2014 Olympic gold medallist Brad Jacobs, to make his final shot, an open draw to the eight-foot. 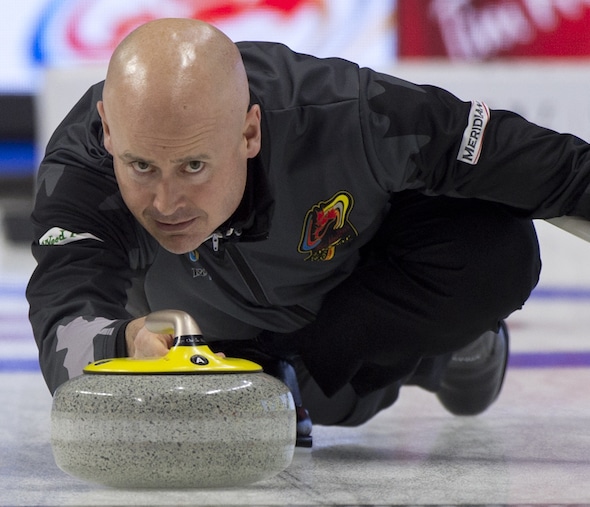 But when the shot sailed through the house it was Koe’s Calgary crew scoring an 8-6 victory Sunday morning and sitting atop the 2017 Tim Hortons Roar of the Rings men’s standings at 2-0 while Jacobs dropped to 1-1.

Jacobs controlled the game, and when he made a delicate punch out of Koe’s shot rock in the ninth to score two and take a 6-4 lead it appeared the squad from Sault Ste. Marie, Ont., would seal the deal. But Koe managed to score two in the 10th to force an extra end. With his first shot in 11, Jacobs drew the button. Koe hit it and rolled behind cover. It was all he could do to have a hope to win. But he didn’t believe he would.

“You never really expect to steal the (extra end) especially after they make a couple of ticks. You’re just trying to make him shoot really. He never really missed all game, so that was uncharacteristic for him and it was a big break for us,” said Koe, who is supported by third Marc Kennedy, second Brent Laing, lead Ben Hebert, alternate Scott Pfeifer and coach John Dunn.

“I don’t think he’ll miss that shot too often. It was just lucky it was against us.”

Jacobs, who doesn’t play again until Monday’s late draw when he goes against reigning world champion Brad Gushue of St. John’s, N.L., said the loss was on his shoulders.

“We should have closed the game out. It’s on the skip,” said Jacobs. “I missed my last shot, that’s my job.

“We’ll enjoy the rest and just do everything necessary to get ready for the next game. It’s definitely going to fester for the rest of the day. If anything, for me, it’s motivating.”

Jacobs, whose team consists of third Ryan Fry, second E.J. Harnden, lead Ryan Harnden, alternate Pete Steski and coach Caleb Flaxey, was baffled as to why he missed when he made a draw to the button with his previous throw.

“That was the whole point of the (first) shot. That’s why it’s completely embarrassing to miss it, especially when you have the best sweepers in the game (his cousins Ryan and E.J. Harnden) and to not bring them into it was amateur.”

In other men’s action, Edmonton’s Brendan Bottcher made his debut at the Trials a good one by jumping out to a 5-1 lead en route to downing Saskatoon’s Steve Laycock 8-6. 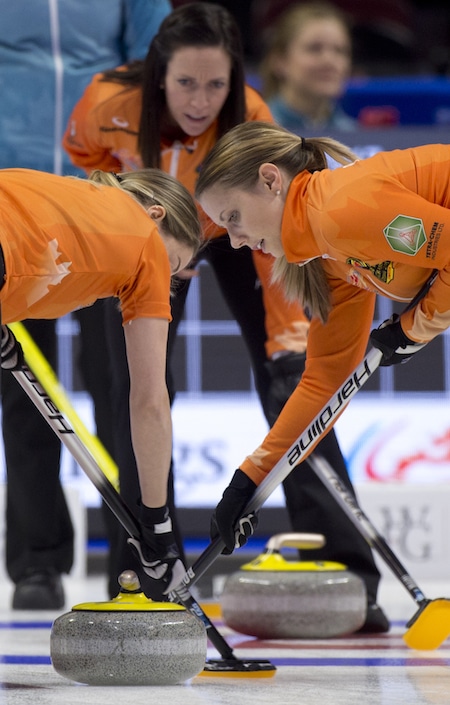 “I’m super happy,” said Bottcher, 25. “This was our first game out there, and we were the last team to get out on the ice. Yesterday (opening day) was a little tough sitting in the arena watching everyone else and I was really proud of the guys for coming out really strong at the start and winning that game is huge for us setting the pace for the rest of the week.”

On the women’s side, 2014 gold medallist Jennifer Jones showed her team is not going to surrender their crown without a fight by downing another Winnipeg team skipped by Michelle Englot 8-5. It followed on the heels of a 9-6 win over Edmonton’s Val Sweeting on Saturday when she bounced back after Sweeting stole three in the first end.

“I don’t know if it sharpened our focus. I mean we were obviously disappointed giving up a steal of three in the first end of the Trials, but we ended well and I thought we played a real good game today,” said Jones, who plays with third Kaitlyn Lawes, second Jill Officer, lead Dawn McEwen, alternate Jennifer Clarke-Rouire and coach Wendy Morgan.

“I didn’t think we played poorly yesterday, just a few shots here and there. I gave the wrong ice a couple of times and we missed the speed a bit the first game, so I thought we had a better handle on the conditions. The ice is great, it’s just a matter of knowing where to put the broom.

“Wins are hard to come by out here. These are amazing teams that are playing well, that are grinding it out too. Everybody’s trying to scrape by some wins so any win you can get is amazing. So you just want to keep going and get as many wins as you can.”

Jones will be back out on the ice again tonight against Alli Flaxey of Toronto (0-1).

Like Bottcher, Julie Tippin of Woodstock, Ont., was played her first Trials game this morning. And like Bottcher she won, defeating Sweeting 7-3.

“We came out and played great, despite any nerves we might have had and the whole team played great, so we’re really happy with our start,” said Tippin.

A key turning point was the third end with Sweeting ahead 2-0. When Tippin threw her first shot she was looking at six Sweeting stones in the house and none of her own. She managed to bury both of her throws to score two.

“I just kind of tried to block all the reds and knew that I had at least something to bury around. Luckily, I had a draw like that before in the game,” said Tippin, who said the end gave her team confidence. “That was definitely a big end for us.”

Live scoring, standings and statistics for the 2017 Tim Hortons Roar of the Rings are available at www.curling.ca/scoreboard/

TSN/TSN2 and RDS2 will provide complete coverage of the Tim Hortons Roar of the Rings. CLICK HERE for the complete schedule

For ticket information for the 2017 Tim Hortons Roar of the Rings, CLICK HERE.

This story will be posted in French as soon as possible at www.curling.ca/2017roaroftherings/?lang=fr