Gushue, Homan teams get crucial wins at Tim Hortons Roar of the Rings

OTTAWA — Brad Gushue’s eighth-end tapback for four propelled his St. John’s foursome to a crucial 8-6 win Monday morning over John Morris of Vernon, B.C., that kept Gushue in the thick of the fight at the Tim Hortons Roar of Rings and put Morris’s hopes in jeopardy. 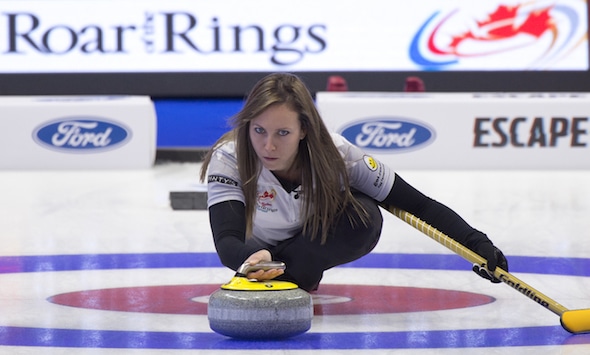 Rachel Homan’s team was a big winner on Monday morning at the Tim Hortons Roar of the Rings. (Photo, Curling Canada/Michael Burns)

One sheet over, Rachel Homan showed that her game is back on track as she made all the key shots to lead her Ottawa foursome to a 4-2 win over Krista McCarville of Thunder Bay, Ont. Gushue, third Mark Nichols, second Brett Gallant, lead Geoff Walker, alternate Tom Sallows and coach Jules Owchar from the Bally Haly Country Club, were forced to take one in the second, Gushue having to make a hit-and-stick against five Morris counters. In the third Gushue, the reigning Tim Hortons Brier champion, rubbed on a guard with his last rock, leaving Morris to draw for three and get a lead for only the second time in three games. Gushue got two back in the with a soft hit and stick and took control from there. “I threw a bad rock in the third end, which seems to be my nemesis this week, ticked the guard and gave him the chance for three,” Gushue said after the win improved his team to 2-1. “Obviously once we gave up the three we were in a bit of trouble, especially with the way we’ve been performing with the hammer, but we came right back in the fourth, a real bounce-back end and got a deuce. That got us back feeling good. A good fifth end, got a steal and put a lot of good ends together.”

Then he put a dramatic emphasis on the game in the eighth with a last-rock, tight double to score four – the last two points coming after a measurement. “It was a really difficult shot, but we executed it perfectly,” Gushue said of his last stone. “Once you get four, and we were pretty confident there were three for sure, and three or four there we win that game 99 per cent of the time.” Morris dropped to 0-3 and said later he’s surprised to find his team winless at this point. “It’s first time I think I’ve been 0-3 in a Trials. This is by far the toughest Trials. We have to run the table to have a chance. We’re close but we’re not getting eight shots an end. We have to dig deep now because our Olympic lives are on the line.” In the only other game in the morning draw, Homan, third Emma Miskew, second Joanne Courtney, lead Lisa Weagle, alternate Cheryl Kreviazuk and coach Adam Kingsbury built a 3-1 lead after five on the strength of some fine draw shots by their skip. Homan made two excellent last-rock draws to score one in the second and steal another one in the third. In the final ends Homan, now 2-1, made two nearly-perfect doubles to blank the eighth and ninth ends before scoring one in the 10th. “It was really nice to make that,” she said of her ninth-end final stone. “We had a few different options and it was really nice to make that and roll out to keep the hammer to 10.We made some really big shots today.” The loss dropped McCarville to 1-2. The 2017 Tim Hortons Roar of the Rings continues with draws today at 2 p.m. and 7 p.m. (all times EST). Live scoring, standings and statistics for the 2017 Tim Hortons Roar of the Rings are available at www.curling.ca/scoreboard/ TSN/TSN2 and RDS2 will provide complete coverage of the Tim Hortons Roar of the Rings. CLICK HERE for the complete schedule For ticket information for the 2017 Tim Hortons Roar of the Rings, CLICK HERE. This story will be posted in French as soon as possible at www.curling.ca/2017roaroftherings/?lang=fr