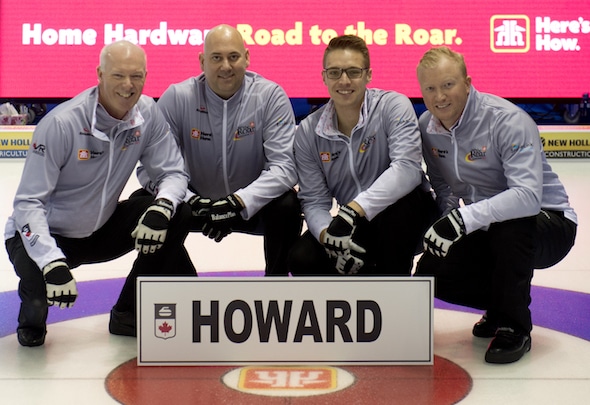 Howard’s team from the St. George’s Golf & Curling Club in Etobicoke, Ont., will play a Brazilian team skipped by Marcelo Mello in a best-of-five series during the 2018 World Financial Group Continental Cup, presented by Service Experts, Jan. 11-14 in London, Ont., at The Sports Centre at Western Fair District.

The winning country will secure a berth into the 2018 World Men’s Curling Championship, presented by Ford of Canada, March 31-April 8 in Las Vegas.

“We’re honoured to be asked to represent our country in this challenge, and I can guarantee you we will be taking this very seriously,” said Howard, who won Canadian and world men’s championships in 1987, 1993, 2007 and 2012. “We know how important playing at the World Championship is, and we know the kind of expectations Canadian curling fans have for teams wearing the Maple Leaf, so I can guarantee you that Team Howard will do everything possible to make sure we meet those expectations.”

Even though Canada is the reigning world men’s champion, and is ranked first in the world in men’s curling, it wasn’t guaranteed a berth into the 2018 Men’s Worlds. Under World Curling Federation rules, the Americas Zone is guaranteed just two spots in a world championship, with one spot traditionally going to the highest finisher in the season previous.

But because the United States is hosting the 2018 World Men’s Championship, it gets the guaranteed Americas Zone berth as the host nation, meaning Canada can be challenged by any other WCF member nation located in the Americas Zone. Only Brazil elected to launch a challenge.

The schedule of games looks like this (all times Eastern):

Meanwhile, Team North America added its final two teams this past weekend after the 2017 Tim Hortons Roar of the Rings concluded in Ottawa.

On the men’s side, Tim Hortons Roar of the Rings champion Kevin Koe of Calgary earned a berth into the WFG Continental Cup, which will be their last major tuneup for the 2018 Winter Olympics in Pyeongchang, South Korea.

On the women’s side, Winnipeg’s Michelle Englot was added to the lineup. With Ottawa’s Rachel Homan, who won the women’s title at the Tim Hortons Roar of the Rings, already having qualified for the WFG Continental Cup by virtue of her victory last February at the 2017 Scotties Tournament of Hearts, Englot, who finished second to Homan at the 2017 Scotties, was added to the Team North America lineup.

Tickets for the 2018 World Financial Group Continental Cup are available online at curling.ca/tickets or by phone 1-855-985-5000.