PORTAGE LA PRAIRIE, MAN. — When the dust settled on the final round-robin draw at the 2018 Canad Inn Canadian Mixed Doubles Curling Trials, seven teams felt relief after securing one of eight available playoff spots. However, Chelsea Carey (Calgary) and Colin Hodgson (Winnipeg) along with Nancy Martin (Saskatoon) and Catlin Schneider (Regina) will play a tiebreaker game to determine which team earns the final playoff spot. Carey/Hodgson (5-3) defeated Marliese Kasner and Dustin Kalthoff (1-7) in the final round-robin draw of the trials on Thursday night at Stride Place. The 10-3 victory was important as it continues their path to the playoffs. Among the five teams with 5-3 round-robin records, Carey/Hodgson and Martin/Schneider had the highest cumulative last-stone draw totals, meaning the teams will play a tiebreaker at 8:30 a.m. (CST) on Friday. “We’ve had a history of slow starts in mixed doubles events. It was not necessarily a slow start but we seem to respond well to having our backs against the wall, so hopefully that holds true in the tiebreaker tomorrow as well,” said Carey. The top two teams from each pool, along with the next four teams with the best win-loss records enter the playoffs. The teams will play in a modified double knockout playoff to decide which four teams qualify for the Page playoff. Jocelyn Peterman/Brett Gallant and Laura Crocker/Geoff Walker each clinched first in Pools A and B respectively with 8-0 records. In Pool A, Jennifer Jones and Mark Nichols (6-2) booked their trip to the playoffs during Draw 17 with an 8-4 win against Emilie and Robert Desjardins. Jones/Nichols scored three points in both the second and fourth ends on their way to victory. Dana Ferguson and Brendan Bottcher (6-2) placed second in Pool B despite losing 5-4 to Sherry Middaugh and John Epping (2-6). Kaitlyn Lawes and John Morris (5-3) clinched a playoff berth with an 11-3 win against Nicole Westlund-Stewart and Tyler Stewart (0-8) during the late draw. A steal of four by Lawes/Morris in the first end set the tone of the game. While Westlund-Stewart/Stewart responded with a deuce in the second, Lawes/Morris negated it with a draw for two in the third end and forced their opposition to one point in the fourth. They picked up scores of two and three points in the fifth and sixth ends. 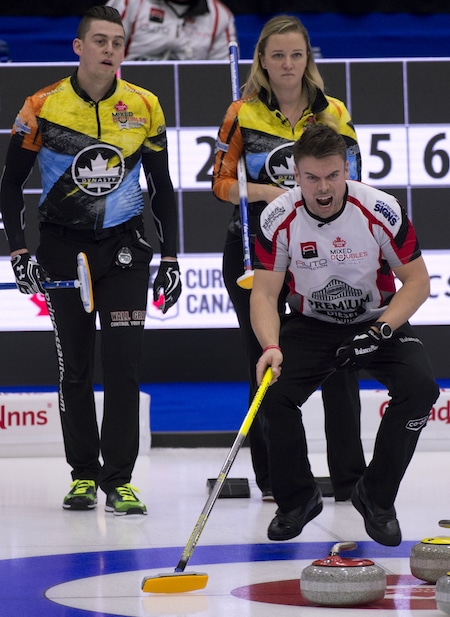 Dustin Kalthoff shows some emotion in his game against Colin Hodgson and Chelsea Carey on Thursday. (Photo, Curling Canada/Michael Burns)

“We really dug deep and it was a huge day for us. We couldn’t afford one loss. I was really proud of how we pulled together and played our guts out,” said Morris. Val Sweeting and Brad Gushue (5-3) came out strong in the second half of their game against Kalynn Park and Charley Thomas (3-5). They scored two points in the sixth and three in the seventh en route to a 10-5 win and secured a playoff spot. “Just getting into the playoffs we’ll have a clean slate. The only difference is having hammer and not having hammer and I don’t think the percentages are overwhelming for having hammer in the first end in this format,” said Gushue. Jill Officer and Reid Carruthers (5-3) lost their game earlier in the evening and had to wait for the conclusion of the final round robin draw to see where they stood in the rankings. Despite losing to Peterman and Gallant 8-2, they locked up one of the final playoff spots. The tiebreaker winner will take on top-seeded Peterman/Gallant in the first round of the playoffs, scheduled for 3 p.m. CT. In other first-round matchups, Crocker/Walker (2) play Sweeting/Gushue (7), Jones/Nichols (3) take on Officer/Carruthers (6), and Ferguson/Bottcher (4) are up against Lawes/Morris (5). Another playoff round is scheduled for 7 p.m. The earlier draw also featured Shannon Birchard and Jason Gunnlaugson (2-6) defeating Sherry Just and Tyrel Griffith (3-5) by a score of 7-5 and Kim and Wayne Tuck (1-7) picking up their first victory of the week against Dawn and Mike McEwen (2-6) in a 7-5 result. Live scoring, standings and statistics for the 2018 Canad Inns Canadian Mixed Doubles Trials are available at www.curling.ca/scoreboard/ CBC Sports is providing streaming coverage of the 2018 Canad Inns Canadian Mixed Doubles Trials round-robin draw, with playoff games being broadcast on CBC Sports TV. CLICK HERE for the complete schedule. For ticket information for the 2018 Canad Inns Canadian Mixed Doubles Trials, CLICK HERE. This story will be posted in French as soon as possible at https://www.curling.ca/?lang=fr