There will be a distinctly Olympian feel to the 2018 World Financial Group Continental Cup, presented by Service Experts, when it gets underway Thursday at The Sports Centre at Western Fair District in London, Ont. 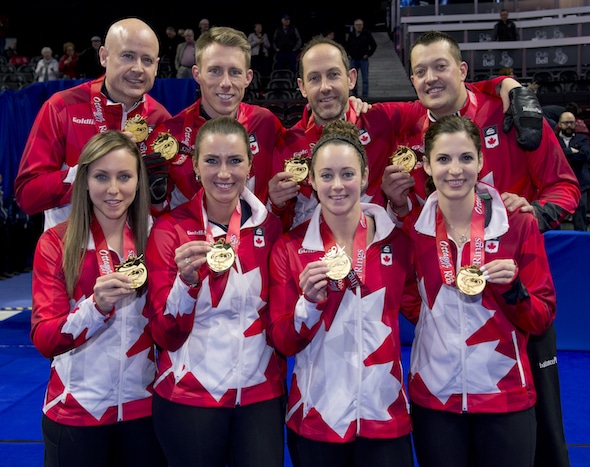 Of the 12 teams from around the world that will gather in London, 10 of them will be packing their bags later this month to travel to the 2018 Winter Olympic Games in Pyeongchang, South Korea, to represent their countries.

That means that not only will bragging rights in curling’s version of the Ryder Cup be on the line in London, Ont., there’ll also be a chance to send a message or two to opponents in advance of the Olympic tournament.

The World Financial Group Continental Cup is a unique blend of traditional curling games, skins competition as well as mixed doubles, and will feature six teams from North America playing six rivals from the rest of the world over four days of competition, with Team North America looking to extend its win streak to six straight years.

The home team will feature four teams from Canada and two from the United States, with four of them bound for Pyeongchang: Calgary’s Kevin Koe and Ottawa’s Rachel Homan, and the U.S. teams skipped by John Shuster and Nina Roth.

Sweden’s Fredrik Lindberg will be the coach while Scotland’s David Murdoch will serve as captain.

A total of 60 points will be available from the three disciplines being contested in London, meaning the side that earns more than 30 points will be declared the champion.

For the first six mixed doubles matches, one point will be awarded for each victory, one-half point if tied; those figures will double for the final three mixed doubles matches. There will be 18 team games (nine men’s and nine women’s) played, each worth one point for a win and a half-point for a tie. All games are eight ends and there are no extra ends.  There will also be six skins games, with each game worth a total of five points to the winner.

Running concurrently to the 2018 World Financial Group Continental Cup will be the first Canada-Brazil challenge round to decide a berth into the 2018 World Men’s Curling Championship, presented by Ford of Canada, later this year in Las Vegas.

Even though Canada is the reigning world men’s champion, and is ranked first in the world in men’s curling, it wasn’t guaranteed a berth into the 2018 Men’s Worlds. Under World Curling Federation rules, the Americas Zone is guaranteed just two spots in a world championship, with one spot traditionally going to the highest finisher in the season previous.

But because the United States is hosting the 2018 World Men’s Championship, it gets the guaranteed Americas Zone berth as the host nation, meaning Canada can be challenged by any other WCF member nation located in the Americas Zone. Only Brazil elected to launch a challenge.

Glenn Howard’s team from the St. George’s Golf & Curling Club in Etobicoke, Ont., will play a Brazilian team skipped by Marcelo Mello in a best-of-five series.

Should Team Howard win the challenge, Canada’s berth in Las Vegas will be secured. As always, the winning team at the 2018 Tim Hortons Brier in Regina will represent Canada at the World Championship.

The schedule of games looks like this (all times Eastern):

When Canada-Brazil games aren’t taking place on the fourth sheet, there will be a variety of activities taking place, including a Hit Draw Tap Youth Skills Showcase, exhibition games featuring Canada’s Paralympic wheelchair curling team, and games between the Fanshawe College and University of Western Ontario curling men’s and women’s teams.

It will be the 14th edition of the World Financial Group Continental Cup, and the first time it has been staged in Ontario.

Tickets for the 2017 World Financial Group Continental Cup can be purchased at www.curling.ca/2018continentalcup/tickets/. Sales have been extremely strong, so you’re advised to act quickly if you want to see the world’s finest curling teams all under one roof.

The opening ceremonies are scheduled for 8 p.m. on Wednesday at the Patch, located in the Carousel Room of the Western Fair District.

Team lineups are available at www.curling.ca/2018continentalcup/teams/