The 2018 New Holland Canadian Junior Curling Championships kicked off on Saturday with men’s and women’s teams from across the country beginning the battle to determine who will represent Canada at the world championships in Aberdeen, Scotland. 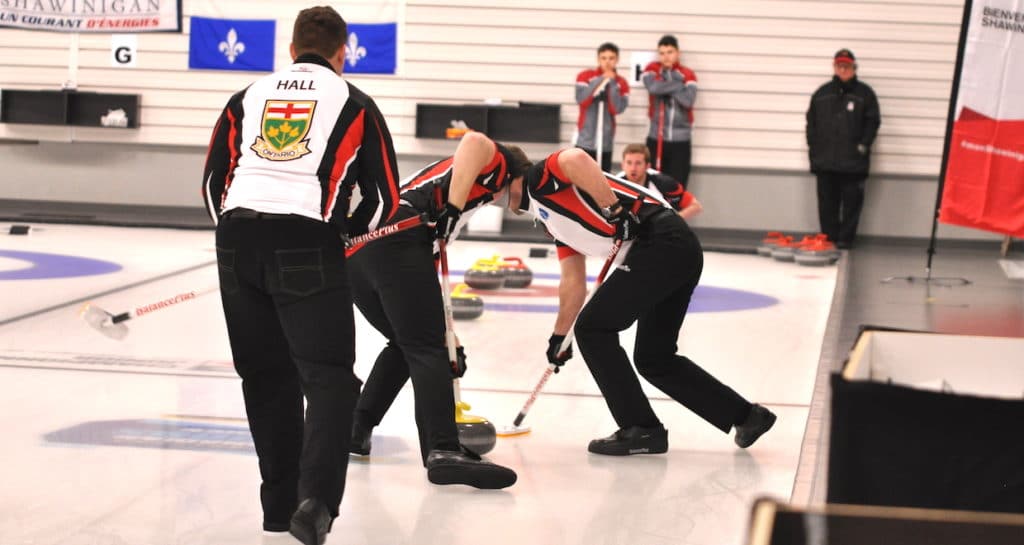 On the men’s side, 2017 silver medallist Matt Hall and his Kitchener, Ont., team of Jeff Wanless, Joey Hart and David Hart started strong, stealing four ends on the way to an 8-2 victory over Sawer Kaeser of Yellowknife, N.T. Alberta’s Karsten Sturmay, making his third appearance at the national championship in four years, held Nunavut’s Javen Komaksiutiksak off the scoreboard in a 16-0 win. The game between Quebec’s Alek Bedard and Saskatchewan’s Rylan Kleiter was close, with Bedard scoring two in the final end to squeak out a 9-8 Quebec win. On the women’s side, Lauren Lenentine, who also represented Prince Edward Island at nationals in 2017, scored five points in the fourth end on the way to a 13-6 win over Northern Ontario’s Hailey Beaudry. Shae Bevan and her Winnipeg, Man., foursome stole seven points in a 15-3 win over Yukon’s Kelsey Meger. In other women’s games, British Columbia’s Taylor Reese-Hansen held a 3-2 lead over Ontario at the break, but Emma Wallingford stormed back to take the next four ends for a 7-3 Ontario win.Quebec’s Laurie St-Georges, playing with just three players after the fourth end, took an early 6-1 lead over Sara England of Saskatchewan and never looked back in a 9-3 victory. Action continues on Saturday with draws at 2 p.m. and 7:30 p.m (all times ET). Fourteen men’s and 14 women’s teams will compete for Canadian titles, separated into two seven-team pools per gender for an initial round robin, followed by a Championship Round (top four in each pool) leading to the playoffs. The top team advances to its respective final on Sunday, Jan. 21, while the second- and third-place teams meet in a semifinal on Saturday, Jan. 20, to determine the other finalist. TSN/RDS2 will carry complete live coverage of the semifinals (women at 1 p.m. [all times ET], men at 6 p.m.) on Jan. 20 and finals (women at 1 p.m., men at 6 p.m.), held at the Aréna de Grand Mère. It’s the first year of event title sponsorship by New Holland, a world leader in the manufacturing and selling of agricultural and construction equipment. For event information, visit www.curling.ca/2018juniors.