SHAWINIGAN, Que. — There’s not much about competing at the 2018 New Holland Canadian Junior Curling Championships that fazes Justine Comeau any more. 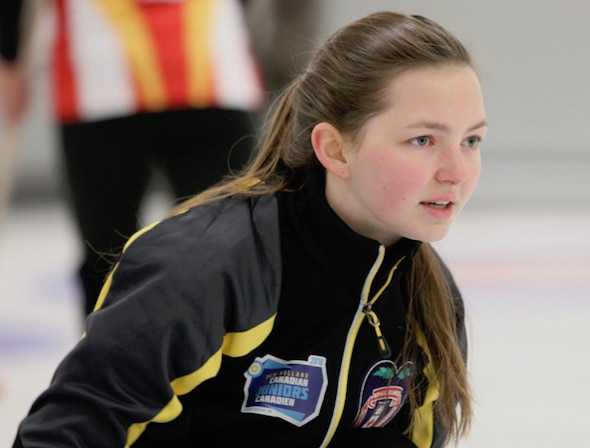 Competing in her third Canadian Juniors in four years, Comeau knew exactly how important it was for her and her 4-2 New Brunswick team from Fredericton to open the Championship Pool phase on Wednesday afternoon at Club de Curling Grand-Mére with a victory against Newfoundland/Labrador’s Mackenzie Glynn (5-1; St. John’s).

So after a 5-3 win that left both teams firmly in the hunt for one of the three available playoff berths, Comeau was able to provide some experienced analysis of her team’s position going into the late stages of round-robin play.

“One more loss, if history repeats itself, should get us at least a tiebreaker,” said Comeau, a 19-year-old business student at the University of New Brunswick, whose team is rounded out by vice-skip Emma Le Blanc, second (and sister) Brigitte Comeau, lead Keira McLaughlin and coach/dad Tim Comeau. “Ideally, we want to win the rest of our games, but these teams made it to the Championship Pool for a reason; there are a lot of tough teams. We’re just hoping we don’t get that loss soon.”

More games like Wednesday’s won’t hurt, as the New Brunswick team patiently went about its business before going hard for a steal in the eighth end with the teams tied 3-3; it paid off when Glynn’s angle-raise attempt just overcurled, leaving New Brunswick with a steal of two.

“We’ve been playing progressively better and better as the week goes on, and normally that’s a good sign,” said Comeau. “Hopefully we can keep that trend going and pull out a few more wins.”

The team has been together for five years, and is vastly different from the young group that finished with a 6-4 record in its first trip to the Canadian Juniors, three years ago in Corner Brook, N.L.

The shock wore off a year later as the team won a bronze medal at Stratford, Ont., and despite missing the Canadian Juniors last year in Victoria, eased that disappointment with a silver medal at the inaugural Canadian Under-18 Championships.

“It was a little frustrating (to miss the 2017 Canadian Juniors in Victoria), but in the end there was nothing we could do about it; they (New Brunswick champ Samantha Crook) won fair and square, and we just had to deal with it. We had Under-18 Nationals right after, so we still had a lot to work for, and we ended up making it to the final, it definitely paid off.”

And it’s paying off here, too.

In the other Championship Pool women’s game, Nova Scotia’s Kaitlyn Jones (6-1; Halifax) was a 7-4 winner over P.E.I.’s Lauren Lenentine (5-2; Cornwall).

On the men’s side, Ontario’s Matthew Hall (6-1; Kitchener) won a rematch of the 2017 Canadian Juniors gold-medal game, turning back B.C.’s Tyler Tardi (5-2; Langley/New Westminster) 11-5, scoring five in the third end to take control; and Northern Ontario’s Tanner Horgan (Sudbury) ran his win streak to seven against no losses with a 6-4 win over Manitoba’s JT Ryan (5-2; Winnipeg).

The Seeding Pool also started on Wednesday afternoon, with teams not making the Championship Pool playing off to decide the final standings.