SHAWINIGAN, Que. — It was two years ago that three members of Alberta’s women’s team at the 2018 New Holland Canadian Junior Curling Championships bore witness to one of the best walk-off shots in curling history. 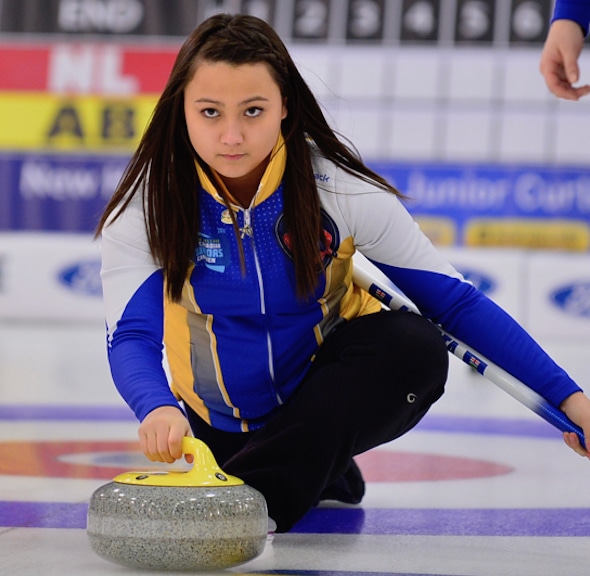 Alberta second Hope Sunley was on the right side of the shot; then, she was the lead for Selena Sturmay’s team, which won the 2016 Alberta junior women’s title when Sturmay made a stunning double raise double takeout with her final shot (CLICK HERE to see the shot).

On the other side were current Alberta skip Kayla Skrlik and her sister (and current vice-skip) Ashton, who could only watch as their dream of representing Alberta was shattered.

“I’ve watched it,” admitted Kayla Skrlik with a smile. “A few times. Oh, it was a great shot. How do you not get over it? She made it awesome; there was only one way to make that shot, and she did it.”

“We were really hoping for the extra end, actually,” admitted Sunley. “We wanted to blast them all out and fingers crossed that we could score in the extra. We kind of got lucky that our rock stuck around.”

Two years later, the Skrlik sisters from tiny Nampa, Alberta, along with lead Megan Johnson, found themselves all attending university in Calgary, and knew that was Sunley’s hometown; why not join forces?

They did just that, and a few weeks later, the team ran the table with an 8-0 record at the Alberta junior championship in Lethbridge, and find themselves in the playoff hunt at the Canadian championship, following a 10-2 win over Newfoundland/Labrador’s Mackenzie Glynn (St. John’s) that left both teams with 5-3 records.

“We definitely took the long route, my sister and I, but what an awesome experience,” said Kayla Skrlik, whose team represents the Falher Curling Club in the Peace country of Alberta (20 minutes from Nampa; “My class sizes at the University of Calgary are bigger than Nampa,” joked Skrlik), and is coached by Charles Simoneau.

“It was great (to win the Alberta junior title), it was so relieving, and to do it with Hope, Ashton and Megan, it’s an amazing team to work with. They’re so fun.”

The team is still in contention for one of three playoff berths, but almost surely will need to win its final two games — later Thursday against P.E.I.’s Lauren Lenentine (5-3; Cornwall) and Friday morning against Northern Ontario’s Hailey Beaudry (3-5; Thunder Bay) to have a chance.

“We’re pleased,” said Skrlik, whose trying to give the Peace Curling Association its first Canadian junior women’s champion since Heather Nedohin (then Godberson) in 1996; Nedohin went on to win the world junior title. “We had a couple tough losses earlier, but we’re just trying to grind out these last two games and make it into a playoff spot.”

In the other women’s Championship Pool game, New Brunswick’s Justine Comeau (7-2; Fredericton) continued her march to the playoffs with a 9-2 win over Northern Ontario.

The first-place finisher in the Championship Pool will go straight to Sunday’s women’s gold-medal game Sunday at 1 p.m. (all times Eastern), while the second- and third-place teams will meet in the semifinal Saturday at 1 p.m.

On the men’s side, 2016 silver-medallist and 2017 bronze-medallist Tanner Horgan of Northern Ontario (Sudbury) clinched first place in the Championship Pool with a 7-3 win over Quebec’s Alek Bédard (4-4; Lacolle). The win left Northern Ontario with an 8-1 record to earn a bye to Sunday’s 6 p.m. men’s final.

In the other Championship Pool men’s game, Manitoba’s JT Ryan (7-2; Winnipeg) scored two in the 10th end for a 7-6 win over Newfoundland/Labrador’s Daniel Bruce (3-5; Corner Brook).