SHAWINIGAN, Que. — If Laurie St-Georges seems to look at her broom-head more often than most players at the 2018 New Holland Canadian Junior Curling Championships, there’s a good reason. 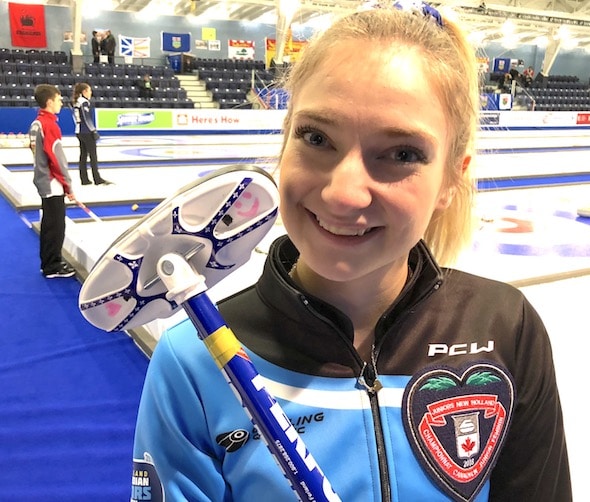 The 20-year-old skip of Team Quebec has a visual reminder on her broom-head — a little smiley-face — to provide some occasionally needed perspective on what’s going on out there on the ice.

It’s even earned her the nickname Smiley, according to her team’s website, teamstgeorges.com/teamlauriestgeorges/en/.

There have been plenty of reasons for St-Georges and her team from Laval-sur-le-Lac (vice-skip and sister Cynthia St-Georges, second Emily Riley, lead Noémie Gauthier, alternate Isabelle Thiboutot and coach/dad Michel St-Georges) to smile here this week. Thursday morning at Aréna de Grand-Mère, Quebec took big step toward one of the three available playoff berths with a 10-1 victory over Newfoundland/Labrador’s Mackenzie Glynn (5-3; St. John’s).

The win left Team Quebec with a 6-2 record, tied for second place in the Championship Pool with Ontario’s Emma Wallingford (Ottawa) and New Brunswick’s Justine Comeau (Fredericton), behind only Kaitlyn Jones of Nova Scotia (7-1; Halifax).

The hand-drawn smile on the broom has its roots to when Laurie St-Georges was getting started in curling.

“When I started curling, I wasn’t really smiling on the ice; I was really negative,” recalled the University of Quebec at Montreal student. “So the smiles on my broom remind me. When I miss a shot, or things go bad, I look at my broom I remember, ‘OK, Laurie, keep calm, smile, enjoy it — it’s a fun sport, it’s a game.’ ”

Still, it was hard to smile on opening day in Shawinigan for the Quebec team as Gauthier could only play four ends; she had hurt her back in a skating fall prior to the New Holland Canadian Juniors, and the pain proved too much. She gave way to Thiboutot, who’s played every end since.

“It’s hard because she (Gauthier) deserved to play, she deserved to be here,” said St-Georges. “We love her, and the chemistry is different with her and Isabelle. But we just kept going and played our game, and enjoyed the experience.”

It’s an experience that’s been made even better by being the home team in Shawinigan, where the fan support has been superb.

“It’s such a good experience, playing in front of my family, friends, Quebec curlers — it’s just incredible,” said St-Georges. “The feeling of being on the ice in Quebec, in front of Quebec people, it’s amazing. But we’ve tried to focus on our game and not be influenced by the people off the ice. We’re trying to enjoy the moment and enjoy the crowd. But the key words are focus and intensity.”

That’s the approach Quebec will take into its final two round-robin assignments — later Thursday against Ontario, and on Friday against P.E.I.’s Lauren Lenentine (5-3; Cornwall).

“Our goal is to be in the top three (playoffs); but game by game, we’re playing so great,” said St-Georges. “We just have to keep going like this. No pressure — enjoy it and keep doing what we’re doing.”

In other Championship Pool women’s games, Nova Scotia was a 6-5 winner over Ontario, while New Brunswick downed Prince Edward Island 9-6.