SHAWINIGAN, Que. — A year ago in Victoria, JT Ryan and his Manitoba champion team from Winnipeg saw its title hopes ended with a tiebreaker loss to Ontario’s Matthew Hall. 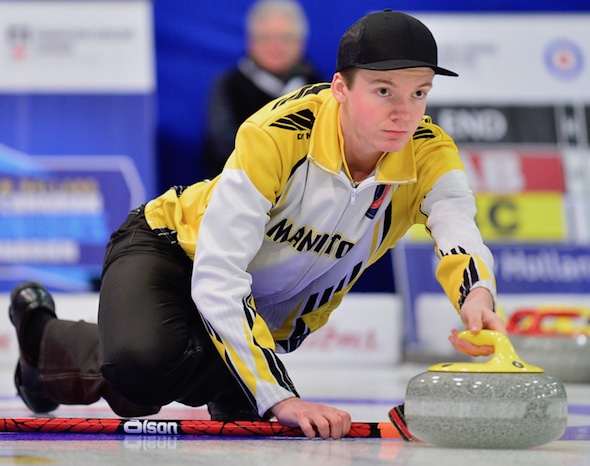 So, one might think that avenging that defeat Friday afternoon at the Aréna de Grand-Mère in a tiebreaker game at the 2018 New Holland Canadian Junior Curling Championships might feel just a little sweeter than usual.

But that wasn’t the case, said Ryan after a 7-4 victory over Ontario that clinched a berth in Saturday’s 6 p.m. (all times Eastern) men’s semifinal against defending champion Tyler Tardi of B.C. (Langley/New Westminster),

“Them knocking us out last year (Ontario won that game 8-7) didn’t make it feel any better,” said the 20-year-old Ryan, whose team is rounded out by vice-skip Jacques Gauthier, second Colin Kurz, lead Brendan Bilawka and coach John Lund. “I think the fact that they’re such a great team makes it feel nice.”

There was no shortage of great teams in Shawinigan, suffice it to say and while Manitoba was beating Ontario, B.C. was taking an extra end to beat Karsten Sturmay of Alberta (Edmonton) 5-4 to set up a family reunion of sorts in Saturday’s semi — Tardi and his brother Jordan, who plays second on Team B.C., are cousins with Gauthier.

And whoever wins Saturday’s semifinal will run into another great team in Sunday’s 6 p.m. gold-medal game — Northern Ontario’s Tanner Horgan (8-2; Sudbury), who won silver at the 2016 Canadian Juniors and bronze last year in Victoria.

“I think we can all breathe a sigh of relief,” said Ryan. “Like, we’re happy with where we are now, but there’s still more to do.”

Earlier on Friday, Manitoba had lost to Alberta when Ryan was just heavy with his last-rock draw, but didn’t have time to dwell on the disappointment with the tiebreaker beginning soon after.

“It was good for us to bounce back and come out with a performance like that,” he said. “We lost like that earlier in the week (to B.C.), with me missing a draw, but then we had a longer wait and we ended up losing our next one after that because I think we were all still pretty mad. Being able to right back out there helped; we didn’t have as much time to get down on ourselves.”

The women’s playoffs get underway on Saturday as well; New Brunswick’s Justin Comeau (Fredericton) plays Quebec’s Laurie St-Georges (Laval-sur-le-Lac) Saturday at 1 p.m. in the semifinal, with the winner playing Kaitlyn Jones of Nova Scotia (Halifax) Sunday in the gold-medal game.