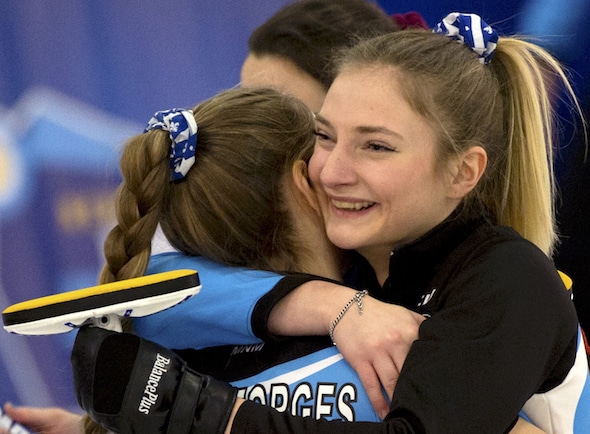 An emphatic 9-3 win over New Brunswick’s Justine Comeau (Fredericton) in the women’s semifinal on Saturday afternoon in front of a nearly sold-out pro-Quebec crowd set up a gold-medal showdown against Nova Scotia’s Kaitlyn Jones of Halifax.

“We’re just so excited,” said Laurie St-Georges, who will be attempting to win Quebec’s first Canadian junior women’s gold medal since Marie-France Larouche prevailed in 1999 at Kelowna, B.C. “We just can’t believe it. It was a big thing to make the semifinals, and making it to the final is a dream come true. I’m so happy to be here, with my family, with all the fans.”

After New Brunswick took a single to open the game, Quebec took the lead for good in the second, with St-Georges drawing for two in the second, and then stealing a game-changing three in the third when Comeau’s last-shot draw wrecked on a guard.

Quebec would add a steal of two in the sixth end and another single in the seventh. New Brunswick took one in the eighth and then conceded the defeat.

“One of those days,” said a disappointed Comeau, who along with vice-skip Emma Le Blanc, second Brigitte Comeau, lead Keira McLaughlin and coach Tim Comeau collected a second bronze medal in three years, after placing third at the 2016 Canadian Juniors in Stratford, Ont.. “I mean, Quebec, they played amazing, they made so many really nice, nice shots and made it really tough on us. We just have to figure out why this keeps happening to us; we’ve lost two national (Under-18) finals, we have two (Canadian Juniors) bronze medals. Definitely it builds character having these tough losses, and we’ll take it and learn from it.”

St-Georges did not have an ideal night of preparation for Saturday’s semifinal; she had a nightmare, dreaming that she had actually lost the semifinal.

“I just woke up and started to cry; I was in shock,” she said with a laugh. “But on the ice today, I felt so good, so relaxed. The (TSN) camera doesn’t bother me at all. It was really nice. We just want to go back on the ice and play the final right now.”

Quebec was responsible for Nova Scotia’s only loss at the 2018 New Holland Canadian Juniors, racing to a 12-2 win on the opening Saturday of the event. Nova Scotia has won eight straight since then, and it’s a team that features three members of the 2016 Canadian and world junior champions — vice-skip Kristin Clarke, second Karlee Burgess and coach Andrew Atherton.

But St-Georges’ coach/father believes his Quebec team is ready to be a Canadian champion.

Later Saturday, the men are on the ice as defending Canadian champion Tyler Tardi and his B.C. team from Langley/New Westminster takes on JT Ryan of Manitoba in the men’s semifinal at 6 p.m. The winner will advance to the men’s gold-medal game on Sunday at 6 p.m. against Northern Ontario’s Tanner Horgan (Sudbury).

TSN/RDS2, the official broadcaster of Curling Canada’s Season of Champions, will provide live and exclusive coverage of the menʼs semifinal later Saturday, and gold-medal games on Sunday. The same games also will be streamed live in the U.S. on ESPN3. CLICK HERE for the broadcast schedule.