This week, John sits down with Casey Scheidegger, who has had 18 months to remember on the World Curling Tour. After an unbelievable 2016-17 season that saw her win the first Grand Slam she ever qualified for among other strong results, Scheidegger got direct entry into this year’s Olympic Trials, where she finished in a tie for fifth. Following that great run, she won her first Alberta Scotties this year, defeating Shannon Kleibrink in an extra end, and she will wear the blue and yellow in Penticton. 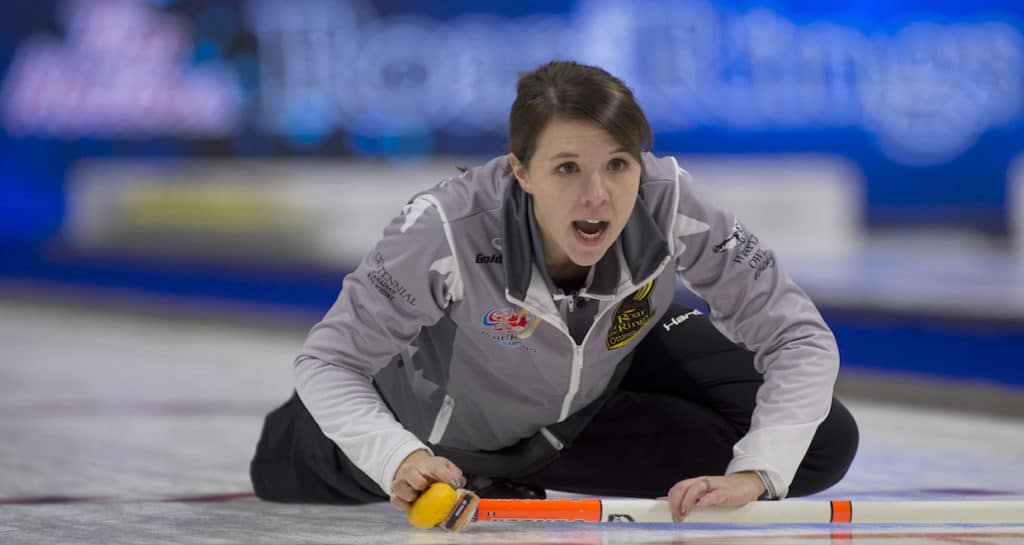 Welcome to Magical Question Fun Time, the Curling Canada feature where comedian John Cullen sits down with your favourite curlers for interviews like you have never seen. Each interview will feature eight questions: five standard questions that will be asked to each curler, two questions specific to that curler, and one question that the curler interviewed before them asks. 1. What’s the nicest shot you’ve ever been a part of? Casey Scheidegger: Probably our shot to win the provincials. It was in an extra end, and we stole to win, so I guess the shot didn’t exactly win provincials, but it put us in a pretty good spot. We came down and tickled one of our rocks over onto the button, and the angles were such that it made it really difficult to remove. John Cullen: Do you find it’s a bit weird to win on a steal? It’s your first Scotties appearance, I’m sure you want to celebrate pretty hard, but then you also have to consider your opponent just missed. It’s a bit awkward. CS: It can be a bit, for sure. Probably the other biggest moment for us was winning the Canadian Open last year, and we won that on a steal too. That one was a bit more awkward because she (Silvana Tirinzoni) missed a draw to the four-foot. So you feel more bad, because I’ve skipped for a long time and I’ve lost games that way too, and it sucks. This one, I felt less bad. The game was back-and-forth and we gave up a steal in eight to be down one coming home, so it was okay. But I did wait to celebrate until we had shaken their hands. 2. If there was an action figure made of you, what non-curling accessory would it come with? CS: Probably something teaching-related, maybe like a really sharp pencil. Wait, is that way too nerdy? [laughs] JC: Yeah. [laughs] I’m just kidding, I’m a teacher too, so I get you. I’m surprised you still use a pencil. CS: Ooh, yeah. Maybe a red marking pen? That’s what I need. JC: That makes you sound really stern though. “Casey Scheidegger action figure comes with your own red marking pen! You can give F’s just like her!” [laughs] CS: That does make me sound mean. But I’m not a hard marker. So just know that if you buy my action figure, I’m nice. [laughs] 3. If you were forced to rob a bank, which two curlers—you can’t choose more than one teammate—would you choose to be on your squad, and what role would you play? CS: So I’ve read your other interviews, and I totally agree with the other people interviewed, I just wouldn’t want to be a part of the actual crime at all. I’ll drive the getaway car and just pretend I knew nothing about it. “Oh, sorry officer, I had no idea these people committed a crime before they got in my car.” [laughs] JC: Okay, well in this hypothetical world I’ve created where you’re a criminal… CS: Yeah, I know it’s just for fun, but jail just seems so awful to me that I don’t even want to joke about it. [laughs] But assuming we get away with it, I would choose Brad Gushue, because he’s probably the most famous curler and he could distract everyone in the bank, and then I’ll take Denni Neufeld. He’s strong like most front-end players, and he seems fast. Is that weird to say? [laughs] He just looks like he could get the money and get out. JC: You know, I was curious if you were gonna choose any teammates, because you did admit that you were going to frame them. CS: That’s why I didn’t choose any teammates, I need them free. And yes, I am 100 per cent going to frame Brad and Denni. I’m just a poor, innocent girl who was driving a car near the bank at the time of the crime. [laughs] 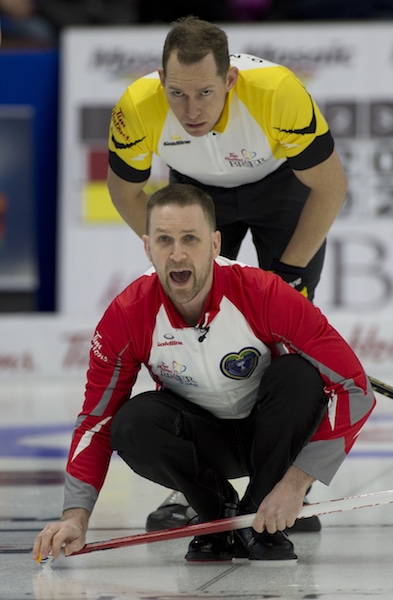 Robbing a bank with Denni Neufeld and Brad Gushue? No problem, says Casey Scheidegger. Brad will distract everyone, and Denni will take the money and run. (Curling Canada/Michael Burns photo)

4. What’s the worst job you’ve ever had? CS: I’ve honestly never had a bad job, but probably my first job was my worst. I was a housekeeper and I cleaned hotel rooms. It’s not a great job, but it wasn’t bad. I was 15 and had no skills, so what else are you gonna do? Plus, I like tidying. JC: [laughs] “I like tidying”, you’re not doing yourself any favours on the whole “nerd” front. I feel like cleaning hotel rooms is actually a lot more miserable than you’re making it out to be. CS: I just like tidying up, what can I say? [laughs] It definitely got a bit repetitive, and certainly some of the stories you hear about cleaning rooms up after parties are true. Thankfully I never found any drugs, but lots and lots of alcohol and…other stuff you probably can’t print. But if you can imagine it, it probably happened. [laughs] 5. What’s a stupid thing you incorrectly believed was true for a long time? CS: I had a hard time with this one, so I had to ask my family, and apparently I believed in Santa Claus a lot longer than I should have. BUT, I don’t actually think that’s true, I’m pretty sure I’m just an amazing sister and led on that I did for my younger sister, Jessie. To be honest, she’s lucky to have me. [laughs] JC: [laughs] She is indeed. So you don’t think that you believed longer than a normal kid? CS: I honestly don’t remember that I did, but my family specifically said that I did, so who knows. I think I’m normal. [laughs] 6. Now on to the Casey Scheidegger questions, and I have to admit, you’re a pretty tough person to dig up information on. I’ve asked former teammates, people who know you, and they’re all just saying things like, “Casey is just really nice!” CS: Aw, they said that? That’s very sweet. I’m glad they think I’m nice. JC: They do. But, speaking of your sister, what’s that like? There are a few siblings on tour, and some of them even play on different teams. What are the best and worst parts of playing with your sister? CS: The best part is that we can be really honest with each other. We have that type of relationship where we have no trouble talking to each other about things, and we tend to get over things really fast. That’s what has helped us play together for so long. And the worst part…is probably that we can be really honest with each other. [laughs] 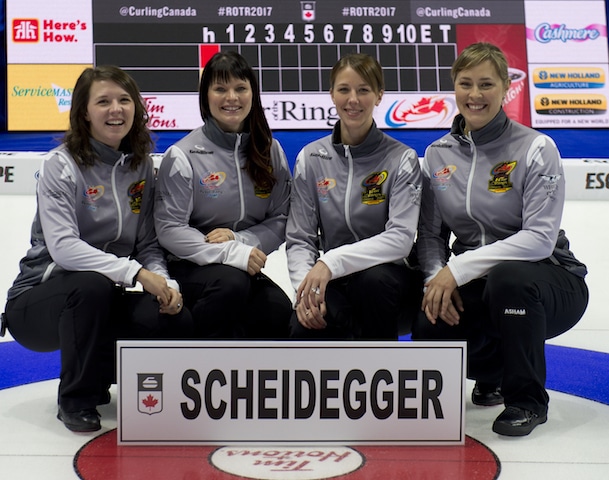 JC: [laughs] I was going to say, when you were saying it was the best thing, I felt it might be the worst. Have there been fights on the ice? I know a few siblings who have really gotten into it. CS: Well, another one of the best things is that she’s really good at second. I think if we played back-end together, we would’ve killed each other by now. We did it once in a Super League in Lethbridge, so not even something too serious, and it was a terrible idea. A total disaster. Thankfully we’ve always realized that. That said, in juniors, we definitely swore at each other a few times. I’m not going to pretend we didn’t. But overall, it’s been great playing with each other. 7. And I gotta ask about your slide. It’s weird as hell. How did that happen? CS: [laughs] It is weird. I wish I had a better answer other than it just happened, but there’s no cool story. My dad took us out when we were younger to curl, and that just felt the most natural way to slide to me. A LOT of people have tried to correct it over the years, but I’ve just never been able to get away from it. Whenever I kick out of the hack, that’s just where my foot wants to go. I know it’s not normal, but it works. JC: I hear you. I was the same, I had a super tuck-style delivery and it was coached out of me when I was younger. I guess you’re just stronger than me. CS: I’ve tried flat-footed and it honestly hurts. I know a lot of people say that they try the tuck and it hurts their knee, but it’s basically the opposite for me. I’ve tried to slide flat-footed and I think my hip just isn’t flexible enough or something, but it’s a nightmare. I’m glad I stuck to my guns. 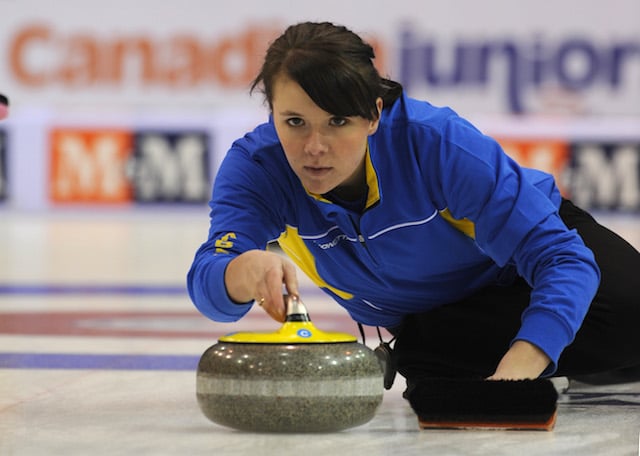 8. All right, now the last question comes in from Brendan Bottcher, and as you know, Brendan is a very thoughtful guy, so his question is a little bit more serious than the ones I’m used to getting. He said he was very curious to hear your answer, and it is a great question, so let’s get to it. He asks, “Having a lead who plays a major role in strategy and experience must be difficult, but also a huge asset. How do you make it work?” CS: Wow, that is a serious question. Well, first I will agree with Brendan and say that it is definitely a huge asset. Kristie (Moore) has the experience of being on an Olympic team, being on championship teams, that she is a real calming force for us. She’s someone I’ve looked to in huge games—like a provincial final—for affirmation that I’m doing the right thing, and it’s made my job as a skip that much easier. JC: I try to affirm to my skip that he’s doing all the right things too, but he usually tells me that he is aware of that, since he is much more successful at curling than me. [laughs] CS: [laughs] Right, you’re a lead too! It is a balancing act, I think, and in the past, I’ve definitely tended to have less input from the lead when it comes to strategy discussion. Not that I’ve played with anyone who didn’t have meaningful things to say, but you never want too many cooks in the kitchen. And to answer Brendan’s question about strategy, I honestly haven’t found Kristie’s input difficult to handle, because she is very good at knowing when to interject and when not to. I haven’t really found myself thinking, “okay, I need you to be quiet now.” [laughs] She has a knack for knowing exactly when I want to hear from her, and it’s been so good for our team. 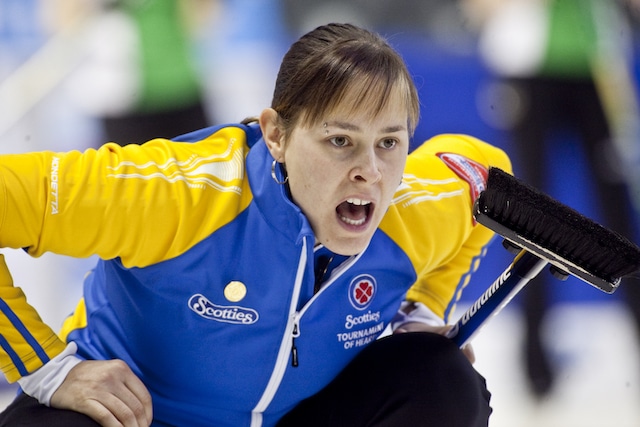 JC: Well that’s fantastic! Thank you Casey. In continuing with tradition, I will be interviewing the junior champion skips, and since BC won again, this year, I’ll be sitting down with Sterling Middleton, the third for Team BC (and now Canada). Do you have a question for him? CS: Okay, I am bad at this, but I polled my students about it, and we came up with a good one. Ask him if he was going to go to the Olympics for a sport other than curling, which one would it be and why? JC: Ooooooh I love that! Great and timely question. Thanks for this Casey, and best of luck at your first Scotties! As always, you can follow John on Twitter @cullenthecurler, and you can follow Casey at @kcdigs7.