PENTICTON, B.C. – Be warned there will be plenty of Manitoba buffalo roaming the ice of the South Okanagan Events Centre for the next week or so with a late report of four more wild, er, make that wild-card, bison making an appearance. 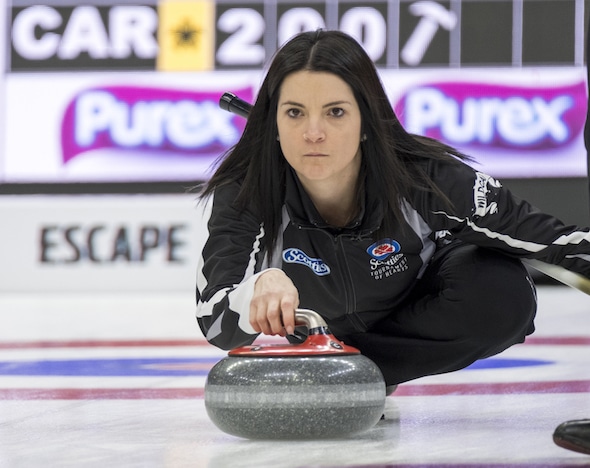 The team skipped by Kerri Einarson from East St. Paul, Man., turned back Chelsea Carey of Calgary 7-4 Friday in a one-game playoff for the wild-card berth into the 2018 Scotties Tournament of Hearts Canadian women’s curling championship. It was the first wild-card game played under Curling Canada’s new 16-team format for the Scotties and Tim Hortons Brier. The teams were invited to play the game as the top two teams in Curling Canada’s Canadian Team Ranking System that didn’t win a provincial/territorial title. “That was almost the most nerve-wracking (game she’s ever played),” said Einarson. “It’s do or die, you’re in or you’re out so we were definitely nervous. But nerves are good. If you’re not nervous you’re not ready. We’re super, super excited.” Einarson’s victory means three teams from Manitoba, where curling champions wear buffaloes on their backs, will compete at the 2018 Scotties. Einarson, third Selena Kaatz, second Liz Fyfe and lead Kristan MacCuish join two Winnipeg based teams: Manitoba champion Jennifer Jones and Team Canada skipped by Michelle Englot, who as runner-up at the 2017 Scotties replaces Olympic-bound Rachel Homan’s Ottawa-based rink, which won the 2017 Scotties, as Team Canada. The only other time three from the same province competed in the same Scotties was 2015 when Homan’s squad was Team Canada, Toronto’s Julie Hastings’ team won Ontario and Tracy Horgan (now Fleury) of Sudbury skipped the Northern Ontario rep. Although it could have been a one-and-done situation for Einarson’s team, it came prepared to complete the competition although it did not bring an alternate player or a coach. “You definitely have to pack for (a 10-day event) and now I have to make arrangements for my children,” said Einarson with a laugh. Einarson’s only other Scotties appearance was 2016 when she had a 7-4 record before losing both games in the Page playoff to finish fourth. That was the year Carey skipped Alberta to a Canadian title. Less than seven weeks ago, Carey’s crew of third Cathy Overton-Clapham, second Jocelyn Peterman, lead Laine Peters, alternate Jessica Amundson and coach Helen Radford was one end away from representing Canada at the upcoming Olympics. It fell short to Homan, and then bowed out in the Alberta championships, but still had enough Canadian Team Ranking System points to qualify for the wild-card game. “It’s a one-game event, and it’s up against a really good team, so it’s a toss-up all the time,” said a disappointed Carey. “You’ve got to put your best game together and hope it worked out for you and it just didn’t. They took advantage of the opportunities we gave them and we were really close to some really good stuff and it just didn’t work out. That’s the nature of any one-game qualification.” Despite the loss, Carey was grateful for the opportunity to return to the Scotties. “You lost your provincial and you’ve still got a chance to be here, so that part’s good,” said Carey. “But it’s really tough to play in a one-game event when it’s at the very start of an event when you know nothing about the rocks or anything like that. It’s a tough game to play, but we had our chance to get there through Alberta provincials, too. So it’s nice to have a second chance but it sucks not to take advantage of it.”

Before the draw, Curl BC High Performance Director and national coaching consultant Melissa Soligo of Victoria received the Joan Mead Builder’s Award. It recognizes the contributions of someone other than a curler to the advancement of the sport. Mead was a curling producer for CBC until her sudden death. She was instrumental in many of the changes in television coverage, one of the most notable being putting microphones on competitors. Soligo, a former world women’s silver-medallist playing second for Julie Sutton in 1991, has been coaching since 1992 when an accident put a premature end to her curling career. She has coached teams, at national and international levels, including provincial and national wheelchair squads. The 2018 Scotties Tournament of Hearts continues with the opening round-robin draws Saturday at 2 p.m. and 7 p.m. (all times PST). Prior to that, the Ford Hot Shots final will take place at 11:45 a.m., followed by the opening ceremonies at 12:30 p.m.