Mary-Anne Arsenault of Nova Scotia kept alive her hopes of advancing into the Championship Pool at the Scotties Tournament of Hearts with a patient and rewarding 8-2 win Wednesday morning over Chelsea Duncan of the Yukon. 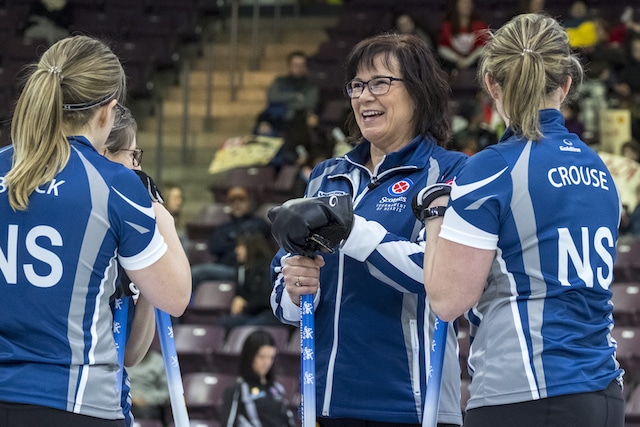 The two teams matched shot-for-shot and miss-for-miss through the first half of the game with Duncan holding a 2-1 edge. But the magical deuce finally appeared for Arsenault in the seventh and the veteran skip promptly followed up by stealing two in the eighth and three in the ninth. “Boy, a girl’s got to work had out there,” a relieved Arsenault said afterwards. “We kept thinking we might get a break at some point and it was really late coming, but we did get the break.” The win improved Nova Scotia’s record to 4-2 in Pool A and kept them tied with Tracy Fleury of Northern Ontario (4-2, Sudbury) for third place. Both teams can advance into the Championship Pool with wins in tonight’s final draw of the initial round-robin or a loss by Sylvia Robichaud of New Brunswick (3-3, Moncton). “Really huge win,” agreed Arsenault. “But you really don’t want more than two losses going into the Championship Pool so tonight’s a big game for us.” Arsenault, third Christina Black, second Jennifer Baxter, lead Jennifer Crouse, alternate Carole MacLean and coach Peter Corkum, play Sherry Anderson of Saskatchewan (2-4, Saskatoon) tonight. Fleury, third Crystal Webster, second Jenna Walsh, lead Amanda Gates and coach Andrea Ronnebeck, will meet Kerry Galusha of the Northwest Territories (1-5, Yellowknife) tonight. Fleury upset the red-hot Jennifer Jones of Manitoba (5-1, Winnipeg) 9-5, handing the five-time Scotties champion her first loss of the tournament. In her usual fashion, Jones, third Shannon Birchard, second Jill Officer, lead Dawn MacEwen and coach Wendy Morgan jumped into the early lead, scoring deuces in the first and third ends for a 4-1 lead.  But they gave two back in the fourth and it was a rare miss by Jones that handed Northern Ontario a steal of one in the fifth end. That pulled Manitoba back into a 4-4 tie, the first time this week Jones has not held the outright lead after the second end. When Fleury scored two in the eighth for a 6-5 lead, it was the first time this week Jones had trailed in a game. 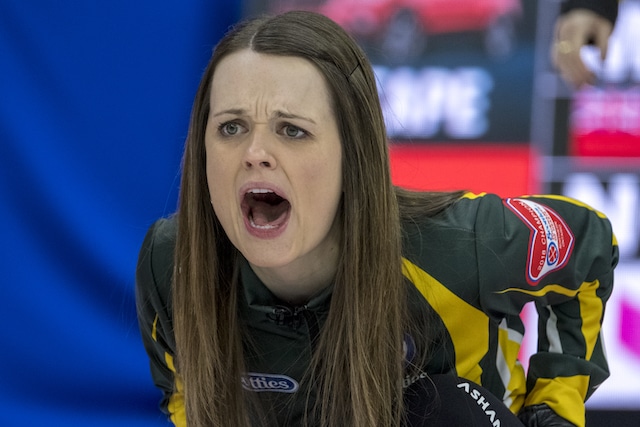 “It’s huge for us. They’re such a great team and having a great week so it’s a big confidence boost for us,” said Fleury. “We just wanted to go in and give them a tight game. That was our goal heading in. We wanted to keep it close and hope it went our way.” Jones could have drawn for one a tie in the 10th but elected to try a difficult angled, double raise, double tap back for two and the win. “I’m not sure (the shot was there) but might as well give it a go,” Jones said. “It’s really hard to steal in the extra end. I felt like we kind of let that one slip away, so we’ll have to rebound and play better tonight.” In the other two morning games, New Brunswick scored one in the eleventh to beat Saskatchewan 7-6 and Kerri Einarson and Team Wild Card (5-1, East St. Paul, Man.) rolled past the Territories 9-3. The 2018 Scotties Tournament of Hearts continues with draws today at 2 p.m. and 7 p.m. (all times PST). Live scoring, standings and statistics for the 2018 Scotties Tournament of Hearts are available at www.curling.ca/scoreboard/ TSN and RDS2 (streamed on ESPN3 in the United States) will provide complete coverage of the 2018 Scotties Tournament of Hearts. Go to www.tsn.ca/2017-18-curling-broadcast-schedule-1.593081 for the complete schedule. For ticket information for the 2018 Scotties Tournament of Hearts, go to www.curling.ca/2018scotties/tickets/ This story will be available in French as soon as possible at www.curling.ca/2018scotties/category/nouvelles/?lang=fr