PENTICTON, B.C. – British Columbia might have played the gracious hosts losing two of its first three games but Kesa Van Osch’s Nanaimo curling crew roared back to secure a spot in the Championship Pool of the 2018 Scotties Tournament of Hearts. 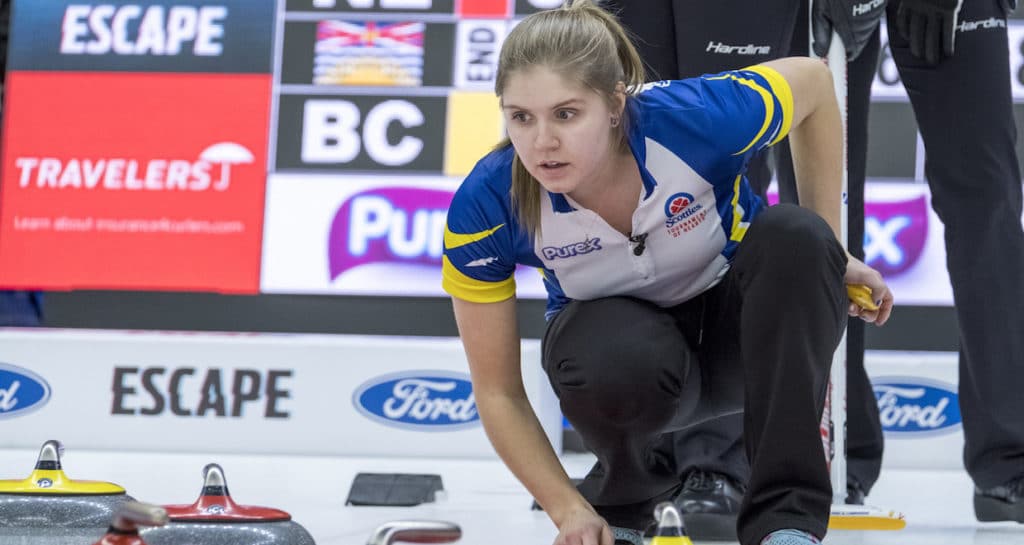 With their fate in their own hands, Van Osch, her sisters third Marika Van Osch and second Kalia Van Osch, lead Amy Gibson, alternate Rachelle Kallechy and coach Bill Tschirhart came through by knocking off Newfoundland/Labrador (St. John’s) skipped by Stacie Curtis 9-7 Wednesday afternoon. Both teams finished Pool B round-robin play in the new 16-team format with 4-3 records, as did Ontario, skipped by Hollie Duncan, who defeated Team Canada’s Michelle Englot (Winnipeg) 7-5. B.C. (Nanaimo) was awarded third place because of victories over both Newfoundland/Labrador and Ontario. Those two will play a tiebreaker for the fourth Championship Pool spot Thursday morning (9 a.m., PT). Alberta (6-1) finished first in Pool B with Team Canada second (5-2). “It’s awesome,” said the B.C. skip of reaching the Championship Pool. “That was our goal coming in. “We really wanted to make that second round. That would be a very achievable goal going in. Now we’ll make a new goal going forward.” Reaching that “achievable goal” didn’t look so reachable Sunday night. “There were a couple of games where we were maybe not so much (confident of achieving the goal), but we definitely coming out today we knew it was. We knew we’d have to come out today and play well,” said Van Osch. She wasn’t going to complain about avoiding having to play a tiebreaker. Duncan, however, isn’t complaining about having to do just that, and potentially three games Thursday if Ontario wins. “We’re not there (in the Championship Pool) yet, but we’re close,” said Duncan. “It feels good not to be out yet, and have a chance. “We wanted to go in loose and have some fun. We had some shaky ends in there, but overall it was a good game.” 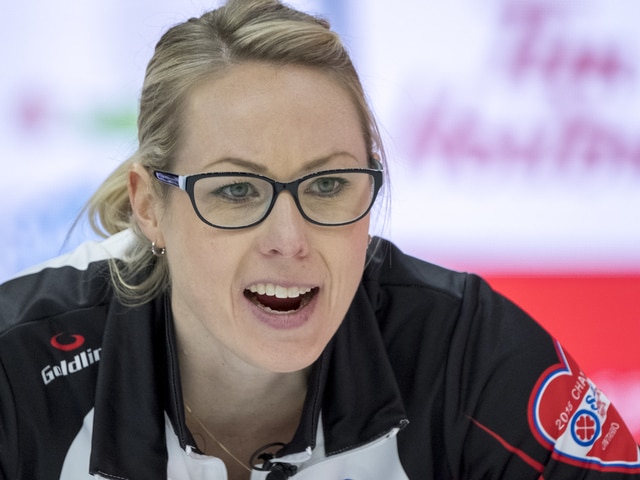 Duncan needed a draw to the button with her last shot facing three Team Canada counters. “It was (nerve wracking), but at the same time I had a shot, I had a way to the button and that’s what you ask for as a skip, to at least have an opportunity to draw to the pin for the win on your last shot. They gave it to me and I made it,” said Duncan. Alberta skip Casey Scheidegger gave herself a couple of nice 30th birthday presents. For one, her Lethbridge/Grande Prairie team of third Cary-Anne McTaggart, second Jessie Scheidegger, lead Kristie Moore, alternate Susan O’Connor and coach Carolyn Darbyshire downed Quebec 9-2. A win was what she woke up wishing for Wednesday. The bonus gift was that the victory secured first place. “We’re pretty happy about that,” said Scheidegger, a high school teacher who received a text from one of her students wishing her Happy Birthday and saying they were following her progress. “(A 6-1 record is) really important going into that Championship Pool for sure because we’re just going to face harder and harder teams. “We had our little hiccup there against Newfoundland (a 9-5 loss Monday). That sort of help us set and refocus. We’re just hoping to have no more of those.” The teenagers from Alma, Que., led by skip 18-year-old Émilia Gagné, came away from the round robin with a record of 3-4 to finish sixth. “It wasn’t our best game, but we’re just happy to be on the ice at the Scotties. It was great, even though we lost,” said Gagné. On Thursday and Friday, the top four teams in each pool will play a crossover Championship Pool round robin against the teams from the other pool they haven’t played yet. Each team’s record from Pool A and Pool B play will carry over with the top four moving on to Page Playoff action Saturday. In the draw’s other game, Prince Edward Island’s Robyn MacPhee (Charlottetown) downed Nunavut (Iqaluit), skipped by Amie Shackleton. P.E.I. finished seventh in Pool B with a 2-5 record ahead of Nunavut (0-7). The 2018 Scotties Tournament of Hearts continues with a draw today at 7 p.m. (all times PST). Live scoring, standings and statistics for the 2018 Scotties Tournament of Hearts are available at www.curling.ca/scoreboard/ TSN and RDS2 (streamed on ESPN3 in the United States) will provide complete coverage of the 2018 Scotties Tournament of Hearts. Go to www.tsn.ca/2017-18-curling-broadcast-schedule-1.593081 for the complete schedule. For ticket information for the 2018 Scotties Tournament of Hearts, go to www.curling.ca/2018scotties/tickets/ This story will be available in French as soon as possible at www.curling.ca/2018scotties/category/nouvelles/?lang=fr