PENTICTON, B.C. – Two teams took a big step up as a team of teenagers created chaos in Pool B action on Tuesday night. 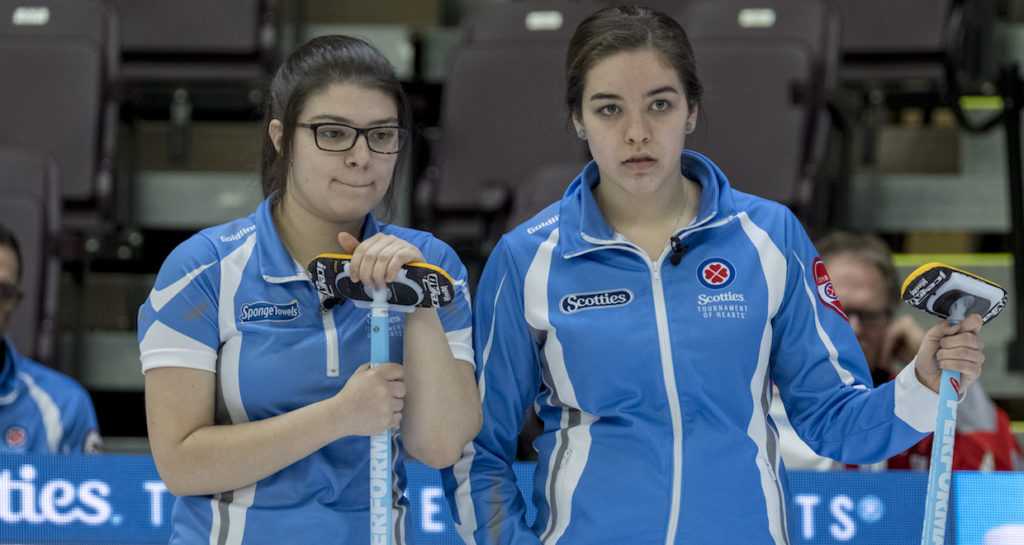 Team Canada and Alberta registered victories Tuesday evening to secure spots in the Championship Pool of the 2018 Scotties Tournament of Hearts at the South Okanagan Events Centre. They both have 5-1 records in Pool B heading into the final preliminary round-robin draw Wednesday. Newfoundland/Labrador, however, was denied its berth in the Championship Pool when it was upset by Quebec 9-7. The team from St. John’s skipped by Stacie Curtis sits third in Pool B at 4-2 while 18-year-old Émilia Gagné from Alma, Que., is in a three-way tie for the fourth spot with Ontario and British Columbia at 3-3. Gagné admitted she was a bit lucky in the eighth end when she didn’t make the double takeout she attempted, but the bounces actually led to her team stealing two to take a 7-5 lead. “That’s what made the difference, but in the end it was most about who had the hammer in the 10th end,” said Gagné. After an opening-draw win, Quebec dropped three in a row before winning two games on Tuesday. “After three losses we were saying we have nothing to lose now. We’re just enjoying having fun. Before the game we were dancing and enjoying,” said Gagné. That leaves the teenage team of third Mélina Perron, 17, second Marie-Pier Harvey, 17, lead Chloé Arnaud, 19, alternate Isabelle Thiboutot and coach Joel Gagné, Émila’s father, in the hunt for a Championship Pool berth. There’s one big road block, however: Alberta. “It’s a big game (Wednesday),” said Gagné. “We’re here to get experience and no matter what happens we’re proud of what we’ve done so far. I think it’s even higher than our expectations that we had here entering this week.” Alberta skip Casey Scheidegger, third Cary-Ann Taggart, second Jessie Scheidegger, lead Kristie Moore, alternate Susan O’Connor and coach Carolyn McRorie scored early and often in an 11-1 rout of B.C.’s Kesa Van Osch (Nanaimo). Alberta scored two in the second end and stole three in the third for an early 5-0 lead. A steal of three in the sixth, making it 9-1, proved to be too big a deficit. 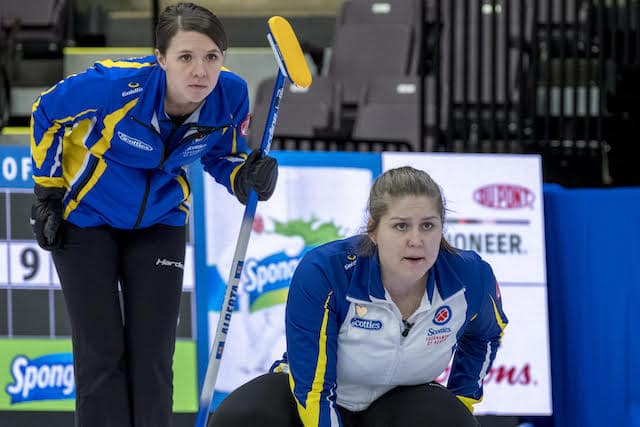 It was a bounce-back day for Alberta. After falling to Newfoundland/Labrador Monday afternoon, and falling from the ranks of the undefeated in the process, the Lethbridge/Grande Prairie team responded Tuesday with an 11-4 win over Nunavut in the morning before routing B.C. in the evening. “That’s good news,” said Scheidegger when informed Alberta had reached the Championship Pool. “We just want to stay tough and keep playing well heading into that championship round. “I feel like we’re not quite firing on all cylinders yet. I think we can still improve. We have a knack for getting better as the games go on. So I’m feeling really positive, and hoping we can continue to build on everything we’ve done so far.” A victory over Quebec in the final game will help heading into the Championship Pool since their records in opening pool play will be carried over. “Going into that championship round with only one loss would be huge. We definitely want to keep that record,” said Scheidegger. “Everybody in that pool’s going to be tough to beat, so we want to go in with a good win-loss record so that we can maybe can afford one or two losses in there. But we have to play well, and we know that going in there.” Skip Michelle Englot and her Winnipeg-based Team Canada squad got its Championship Pool spot by defeating Prince Edward Island’s Robyn MacPhee of Charlottetown (1-5) 7-5. “It was a really solid game,” said Englot. “It was probably our best effort as a team. Our goal is to continue building momentum for this first round and then take that into the championship round.” They’ll be facing a hungry Ontario team skipped by Hollie Duncan (Toronto) who cruised to a 12-2 triumph over Nunavut (Iqaluit) skipped by Amie Shackleton. Nunavut is 0-6. Quebec will not only be battling Alberta on Wednesday, but B.C. and Ontario as well for the fourth and final Pool B berth. B.C.’s final preliminary round-robin game will be Wednesday afternoon against Newfoundland/Labrador while Ontario takes on Team Canada. If tiebreakers are necessary they will be played Thursday morning. The 2018 Scotties Tournament of Hearts continues with draws Wednesday at 9 a.m., 2 and 7 p.m. (all times PST). Live scoring, standings and statistics for the 2018 Scotties Tournament of Hearts are available at www.curling.ca/scoreboard/ TSN and RDS2 (streamed on ESPN3 in the United States) will provide complete coverage of the 2018 Scotties Tournament of Hearts. Go to www.tsn.ca/2017-18-curling-broadcast-schedule-1.593081 for the complete schedule. For ticket information for the 2018 Scotties Tournament of Hearts, go to www.curling.ca/2018scotties/tickets/ This story will be available in French as soon as possible at www.curling.ca/2018scotties/category/nouvelles/?lang=fr