Tracy Fleury’s last-rock, tap back to score a single in the 10th end gave her Northern Ontario team a critical 7-6 win over Kerry Galusha of the Northwest Territories Wednesday evening, propelling Fleury and her teammates into the Championship Pool at the 2018 Scotties Tournament of Hearts in Penticton, B.C.. 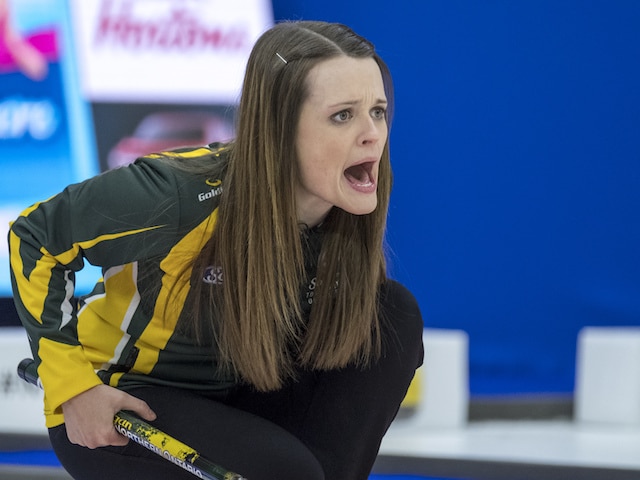 The win improved Fleury’s record in the initial round-robin to 5-2, the same as Mary-Anne Arsenault of Nova Scotia (Dartmouth) and Jennifer Jones of Manitoba (Winnipeg). Team Wild Card, skipped by Kerri Einarson (East St. Paul, Man.) took top spot at 6-1 after a stunning 9-4 win over Jones, who lost both her games Wednesday. All four teams moved on to the Championship Pool with Manitoba getting the second seed, Nova Scotia third and Northern Ontario fourth. “It was a tough one,” Fleury said of her final stone. “The other team played a real good end and we had a couple of misses so they put a ton of pressure on us that end.” She had the advantage of having played almost the identical shot with her first stone. “That’s why I ended up going with that shot on my first one, just to kind of figure out that side so I had it for my second,” she said. “We definitely wanted to avoid that tiebreaker, so that was a huge one for us. “We have a lot of momentum now. We’ve won five in a row.” On the flip side of that is five-time Scotties champion Jones. She lost her first game of the tournament, 9-5 to Fleury in the morning and was rocked in the evening by Einarson, who scored four in the fourth end en route to her first win over Jones after 17 losses. “Oh my God it’s such a relief. I got shivers as soon as we won,” said Einarson. “It’s amazing, it took me 18 tries. That’s huge for momentum. I feel so confident, my team played so well.” 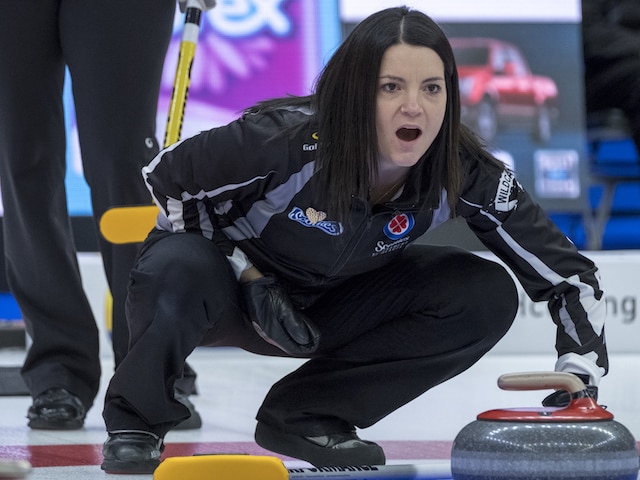 Jones, a five-time Scotties champion, wasn’t shaken by the loss. “Some days things just don’t go your way and you’d rather have it on Wednesday than Sunday,” she said. “I always say it’s nice to get all the bad shots out in one game rather than wasting over a few. And I think we did that tonight.” In the other two games in the evening draw, Arsenault scored a deuce in one and stole a single in two to roll to an 8-3 win over Sherry Anderson of Saskatchewan (2-5, Saskatoon), and Sylvie Robichaud of New Brunswick (4-3, Moncton) beat Chelsea Duncan of the Yukon (0-7, Whitehorse). The 16 teams had been divided into two pools of eight teams each with the top four in each advancing to the Championship Pool and taking their win-loss records with them. They will now cross over to play each other once with the top four teams advancing to the Page playoffs on Saturday. The 2018 Scotties Tournament of Hearts continues Thursday with a Pool B tiebreaker at 9 a.m. between Ontario’s Hollie Duncan and Newfoundland/Labrador’s Stacie Curtis, and draws at 2 p.m. and 7 p.m. (all times PST). Live scoring, standings and statistics for the 2018 Scotties Tournament of Hearts are available at www.curling.ca/scoreboard/ TSN and RDS2 (streamed on ESPN3 in the United States) will provide complete coverage of the 2018 Scotties Tournament of Hearts. Go to www.tsn.ca/2017-18-curling-broadcast-schedule-1.593081 for the complete schedule. For ticket information for the 2018 Scotties Tournament of Hearts, go to www.curling.ca/2018scotties/tickets/ This story will be available in French as soon as possible at www.curling.ca/2018scotties/category/nouvelles/?lang=fr