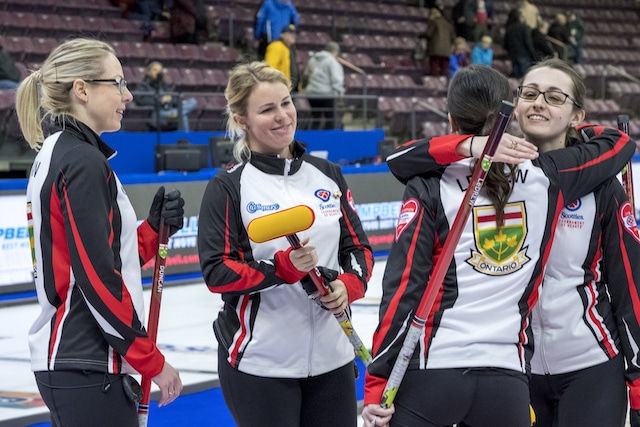 Both teams, along with British Columbia, finished Pool B round robin play with 4-3 records for a three-way tie for third. Since B.C. beat both Ontario and Newfoundland/Labrador during B Pool play the team skipped by Kesa Van Osch (Nanaimo) got to sit the tiebreaker out. “The emotions are all over (the place) on that one,” said Duncan, 31, who is playing in her first Scotties. “It was not my best game, but I think I strung enough together just to pull it out. My team played really well. I had their support that game which was huge.” Four teams from the two eight-team preliminary pools will begin play this afternoon in the Championship Pool. Van Osch will play Manitoba’s Jennifer Jones (5-2) in the first of four draws of Championship Pool round robin play this afternoon. The top four teams from the Championship Pool will advance to the Page Playoff on the weekend. “We’re so excited we get to keep playing and that’s a good feeling,” said Duncan, who got off to a rough start at the Scotties with two losses but then won four of five to squeeze into the tiebreaker. “We’re feeling pretty good.” The roller-coaster ride of a victory means Ontario (Toronto) will play three games today and two more Friday in the Championship Pool beginning with Pool A winner Team Wild Card skipped by Kerri Einarson (East St. Paul, Man.) at 2 p.m. “Today is going to be a long one, but we’re going to be going on some adrenalin, really happy to have made it through,” said Duncan, who plays with third Stephanie LeDrew (who grew up in Corner Brook, N.L.), second Julie Devereaux, lead Karen Sagle and alternate Danielle Inglis. Newfoundland/Labrador started the round robin on fire, winning its first four games, but lost its last three. “Certainly a roller coaster week,” admitted Curtis, who was supported by third Erin Porter, second Julie Devereaux, lead Erica Trickett and coach Eugene Trickett. “But you know we’re going to come out and play in our seeding position (game against Pool A fifth-place finisher New Brunswick skipped by Sylvie Robichaud of Moncton) and try and win that one and end on a good note.” 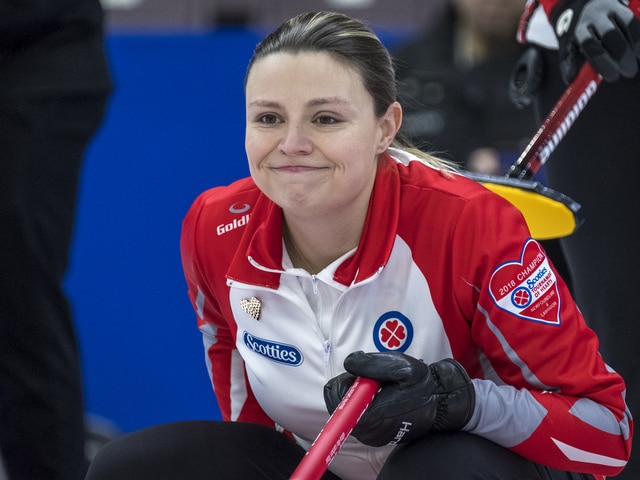 Although the teams kept the Sheet B fairly clean in the first few ends, they still managed a point parade with Duncan getting two in the second, Curtis scoring three in the third and Duncan notching three of her own in the fourth for a 5-4 lead. In the eighth, tied 6-6, Curtis made a sweet hit and roll to sit two behind cover, forcing Duncan to draw one side of the four-foot just to get a point but she ticked a guard. That gave Newfoundland/Labrador a steal of two and an 8-6 lead. But in the ninth, Curtis wrecked on a guard attempting a double takeout, leaving Duncan a draw for four. Duncan, however, sailed her final shot through the house and settled for three and a 9-8 lead. The 10th was shaping up well for Newfoundland/Labrador until the final few throws. On her last, with a mess in the house, Curtis was forced to draw the button just to get to an extra end but it didn’t curl enough and she gave up two. “Obviously disappointed,” said Curtis as she tried to keep her emotions in check. “That said, we didn’t play well enough to get in and that’s the end of it.” After her first loss, Curtis said she’d take being 4-1 heading into the final two round-robin games. Even though she’s out, she still would. “We just couldn’t finish it. We’ll pull it back and see what we have to do to get back here next year and prepare then,” said Curtis. The 2018 Scotties Tournament of Hearts continues with draws today at 2 p.m. and 7 p.m. (all times PST). Live scoring, standings and statistics for the 2018 Scotties Tournament of Hearts are available at www.curling.ca/scoreboard/ TSN and RDS2 (streamed on ESPN3 in the United States) will provide complete coverage of the 2018 Scotties Tournament of Hearts. Go to www.tsn.ca/2017-18-curling-broadcast-schedule-1.593081 for the complete schedule. For ticket information for the 2018 Scotties Tournament of Hearts, go to www.curling.ca/2018scotties/tickets/ This story will be available in French as soon as possible at www.curling.ca/2018scotties/category/nouvelles/?lang=fr