PENTICTON, B.C. – After being on the outside looking in, Sylvie Robichaud and her New Brunswick team showed they were the best of the rest. New Brunswick (Moncton) downed Newfoundland/Labrador, skipped by Stacie Curtis, 8-4, Friday morning to finish ninth at the 2018 Scotties Tournament of Hearts at the South Okanagan Events Centre. 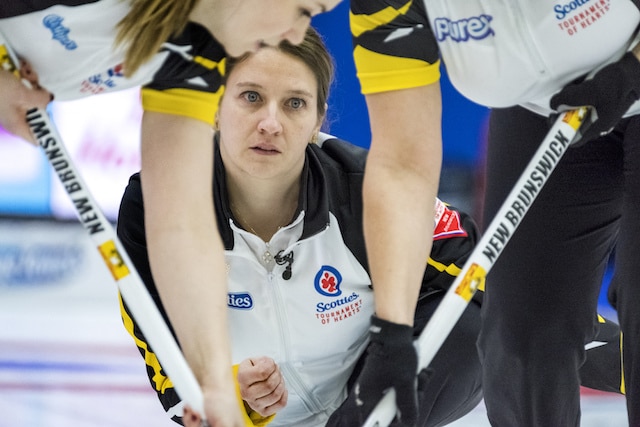 Despite having a winning record (4-3) in the Pool A preliminary round robin, New Brunswick finished fifth. Four teams from each of the eight-team pools advanced to the Championship Pool, leaving Robichaud, third Melissa Adams, second Nicole Arsenault Bishop, lead Kendra Lister and coach Ellery Robichaud out of the hunt for a Scotties title in the new 16-team format. After winning its first four games, Newfoundland/Labrador (St. John’s) was 4-3 in Pool B, but lost a tiebreaker to Ontario Thursday morning for a spot in the Championship Pool. As the two fifth-place finishers, the two Maritime teams played each other in Friday morning’s crossover draw held to sort out the final standings and to determine the points each team would earn toward the Canadian Team Ranking System standings. “We went for it. There was still 500 bucks on the line for us, so we played it for that and for pride. We wanted to finish with a 5-3 record. We wanted to show we deserved to be in the playoff round, but our record just wasn’t good enough for it,” said Robichaud, who had a 5-1 lead after four ends and cruised from there. “We learned a lot through the week. There’s a lot we’ll take from the Scotties and put towards next year.” In a battle of sixth-place teams to determine 11th and 12th place, Saskatchewan, skipped by 54-year-old Sherry Anderson downed a team of teenagers from Alma, Que., skipped by Émilia Gagné 9-7. There were points aplenty in this one. Saskatchewan (Saskatoon) started with a two in the first end, but Quebec responded with a five in the second. Anderson got two more in the third and then stole three in the fourth. A 7-5 score sounds like a complete game, but only four ends had been played. 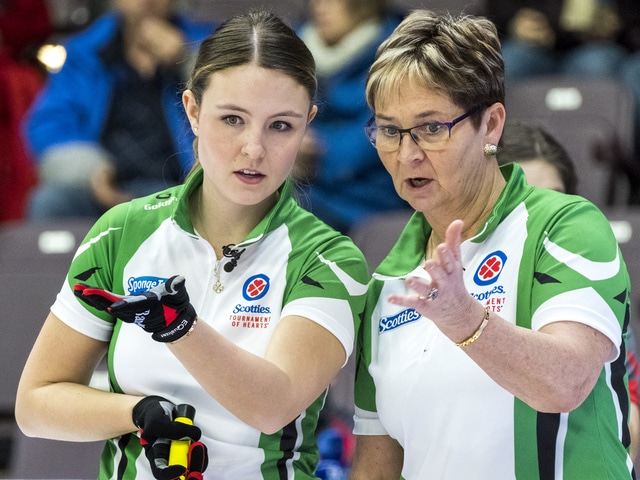 “It’ll show what we have to do to be sharper and better. It’s not that we played badly, really, all week. We just didn’t play as sharply as you need to. If you want it in a certain spot, then you better to be close to that spot or else you’re going to get burned for it. It’s a learning process and hopefully we learned from it,” said Anderson, who was making her eighth trip to the Scotties. She skipped a team of rookies. Karlee Korchinski, 22, played lead, with Krista Fesser, 23, at second and her twin sister Kourtney at third. “Everybody has to have their first time, right? You don’t just come here, and most first timers don’t come here and perform and have one or two losses. Most teams go through the struggles, so this is a good learning curve for them and in the future I’m sure they’ll be back again,” said Anderson, who also had alternate Kim Schneider and coach Rick Folk on the team. In a battle of 1-6 teams heading into the draw, Northwest Territories ended a disappointing run for skip Kerry Galusha’s Yellowknife squad on a high note by downing Robyn MacPhee of Prince Edward Island (Charlottetown) 9-7 to take 13th place. Yukon Territories, skipped by Chelsea Duncan of Whitehorse, downed Nunavut (Iqaluit) 9-4 in a game between winless teams to take 15th place. Christianne West, who began the Scotties as the Nunavut’s alternate, threw last rocks replacing skip Amie Shackleton while third Geneva Chislett called the shots. The 2018 Scotties Tournament of Hearts continues with draws today at 2 p.m. and 7 p.m. (all times PST). Live scoring, standings and statistics for the 2018 Scotties Tournament of Hearts are available at www.curling.ca/scoreboard/ TSN and RDS2 (streamed on ESPN3 in the United States) will provide complete coverage of the 2018 Scotties Tournament of Hearts. Go to www.tsn.ca/2017-18-curling-broadcast-schedule-1.593081 for the complete schedule. For ticket information for the 2018 Scotties Tournament of Hearts, go to www.curling.ca/2018scotties/tickets/ This story will be available in French as soon as possible at www.curling.ca/2018scotties/category/nouvelles/?lang=fr