PENTICTON, B.C. – Mary-Anne Arsenault is two wins away from giving Nova Scotia, and herself, its first Scotties Tournament of Hearts title in 14 years. Nova Scotia (Dartmouth) defeated Northern Ontario (Sudbury) skipped by Tracy Fleury 6-2 Saturday to advance to the semifinal of the 2018 Scotties at the South Okanagan Events Centre. It was Nova Scotia’s ninth consecutive win after starting the week losing two of its first three games. 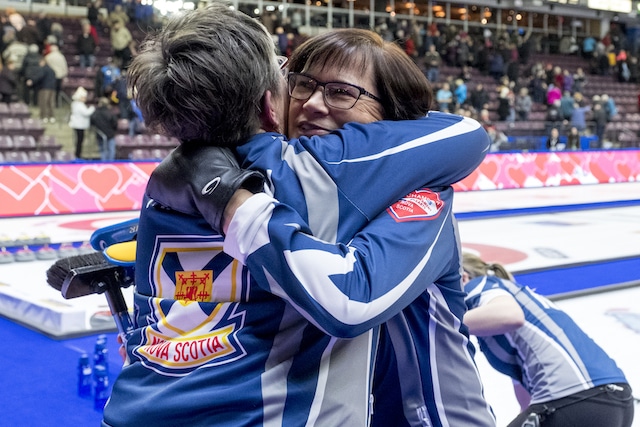 Arsenault is making her 13th appearance at the Scotties. She won five times playing second for Colleen Jones, who won six Canadian curling crowns and made 21 trips to the Scotties. The last one, however, was 2004. Arsenault has skipped her own team three times since then with a record of 16-17. But this year, she emerged from the Championship Pool with a 9-2 record. “It’s just super fun. It was so nice to put a really good game together, I’m so proud of my girls. They played awesome. Any time we got into a bit of trouble then Jen and Christina (second Jennifer Baxter and third Christina Black) would get us back out of trouble so it was awesome,” said Arsenault. Nova Scotia will play the loser of tonight’s Page Playoff 1-2 game between Team Wild Card (East St. Paul, Man.), skipped by Kerri Einarson and Jennifer Jones of Manitoba (Winnipeg) in the Scotties semifinal Sunday (9 a.m. PT). The winner of that game advances directly to the final (4 p.m. PT). Those are the only two teams to beat Nova Scotia this week. “We have a bit of time between now and next game and be proud of ourselves, but then it’s back to business,” said Arsenault. “Those two games, particularly the game against Jennifer (Jones) we didn’t play well, and the game against the Wild Card, my team didn’t play well. We just play like we did (Saturday) and we’ll be right in it.” After three blank ends, Nova Scotia struck for two in the fourth, with Arsenault drawing to the four-foot for a pair. In the fifth, Fleury was forced to take one before Nova Scotia jumped out to a 5-1 lead when Arsenault had an open draw to the eight-foot to score three. When Fleury could only get a point in the eighth to trail 5-2 without the hammer, the task to steal a victory became too much. Fleury struggled with her draw weight shooting 72 per cent overall. Arsenault shot 97 per cent thanks to second Jennifer Baxter and third Christina Black setting her up by both shooting 88 per cent. “We would have liked to have played better, but Nova Scotia played amazing,” said Fleury. “(The ice) was just a little bit quicker and I didn’t catch on to it, and by the time I did it was a little bit too late.” Arsenault, Black, Baxter, lead Jennifer Crouse, alternate Carole MacLean and coach Peter Corkum finished the Championship Pool at 9-2, including winning their last eight. Fleury, third Crystal Webster, second Jennifer Wylie, lead Amanda Gates, alternate Jenna Walsh and coach Andrea Ronnebeck were 8-3 and came in winning eight of their last nine. “We were really happy with our week,” said Webster. “We obviously had a really slow start, coming out at 0-2 so to scramble through to an 8-3 record in a field like this is impressive. We just came out flat today and they played great and that’s what happened. “Mary-Anne’s a veteran and we knew she would play well in this situation so we knew we had to bring our A game and we just didn’t today.” 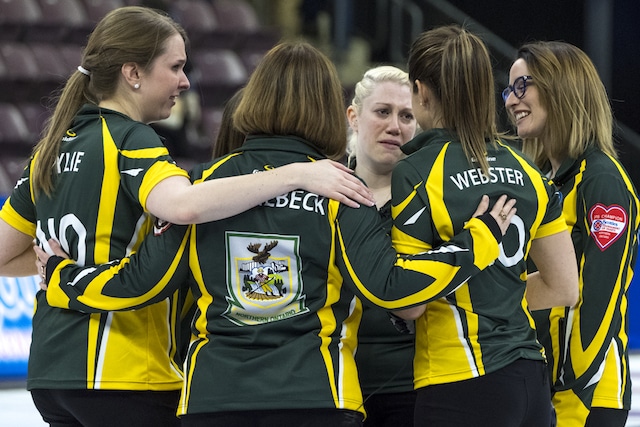