Kerri Einarson and her Wild Card team continued their run through the Scotties Tournament of Hearts Friday, beating Casey Scheidegger of Alberta 7-4 to finish first in the standings and secure their spot in Saturday’s Page Playoff 1-2 game. 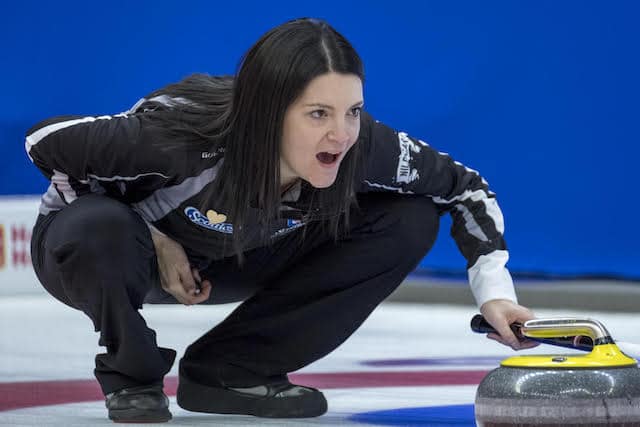 They will meet five-time Scotties champion Jennifer Jones of Manitoba who earned second place with a 10-4 win over Team Canada that knocked Michelle Englot and her Winnipeg-based team out of the playoffs. The Page 3-4 game will have Tracy Fleury of Northern Ontario playing the surprise team of the tournament, Mary-Anne Arsenault of Nova Scotia. Fleury got by Kesa Van Osch of British Columbia 6-5 while Arsenault used a last-rock takeout to score one in the eleventh for a 9-8 win over Hollie Duncan of Ontario. The results left Team Wild Card, Manitoba and Nova Scotia with 9-2 records, Northern Ontario at 8-3, Alberta at 7-4, Team Canada at 6-5 and Ontario and British Columbia at 4-7. Einarson was in tough against Scheidegger, but the Alberta skip’s final draw in the tenth end was a touch heavy and left Einarson a steal of one for the victory. “Got myself into the one versus two game, so I’m ecstatic, I’m so excited and I have goosebumps all over,” said an overjoyed Einarson who had to win a wild card game the previous Friday night to get into the Scotties. “I knew (Scheidegger) was heavy out of her hand (with her final stone) and I was like, oh please, don’t curl.” Einarson, third Selena Kaatz, second Liz Fyfe and lead Kristin MacCuish from East St. Paul, Man., scored singles in six ends while giving up deuces in the third and seventh ends, and the skip said the tight game would be a good prep for their game against Manitoba whom they beat 9-4 in the initial round-robin tournament. “Oh for sure,” she said “But we have to be sharper than we were today. We had a couple of misses and can’t afford that against Jones tomorrow.” Jones, third Shannon Birchard, second Jill Officer, lead Dawn McEwen and coach Wendy Morgan stole three in the second end and scored two in the fifth to roll past Englot, ending her brief reign as Team Canada.