PENTICTON, B.C. – Jennifer Jones has caught the other legendary Jones for the most Canadian women’s curling crowns. Jones captured her sixth Scotties Tournament of Hearts when Team Manitoba (Winnipeg) downed another Manitoban squad, Team Wild Card, 8-6. That ties her with renowned Nova Scotia skip Colleen Jones for the most Scotties titles. It was also the sixth for Jennifer Jones’s second, Jill Officer. However, it’s their first since 2015. Jones has also lost three finals. 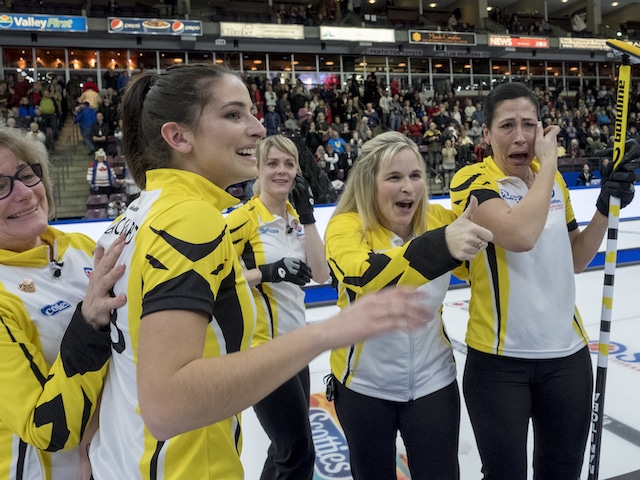 “We’ve had a lot of disappointment over the last few weeks,” said Jones referring to losing out at the Olympic trials in December. “You never know when it’s going to be our last year as a team, so yeah, it feels great. “We’ve been pretty privileged as to how many times we’ve got to wear the Maple Leaf. You never know when it’s going to be your last, so yeah, it feels pretty great to be back there.” Matching Colleen Jones for the most Canadian titles was significant to the Manitoba skip. “Those are things you kind of reflect on later. Colleen Jones is one of the legends and we’re right up there now. It’s so humbling it’s mind boggling to me,” said Jones. Jones, Officer, lead Dawn McEwen and regular third Kaitlyn Lawes will represent Canada at the 2018 Ford World Women’s Curling Championship to be held in North Bay, Ont., March 17 to 25. Shannon Birchard, 23, was recruited to play with Lawes, who is busy getting ready to compete at the Olympics in Pyeongchang, South Korea, in mixed doubles for Canada with John Morris. Lawes will rejoin Jones in North Bay while Birchard is expected to act as the team’s alternate player. When Einarson’s final in-off in the 10th to try and hide on the button failed, Jones lifted her arms in celebration and then wrapped them around Birchard. “We got Shannon in at the last minute and to come out and win the event and play really well from start to finish, with a couple of blips, we’re pretty happy,” said Jones. “We all struggled a little bit early (Sunday) but we knew just to hang in there and you never know what’s going to happen. I’m proud of (Birchard) because she bounced back late., She’s been a real treat to play with, I have nothing but respect for her.” At the same time they were hugging, Officer embraced her niece, Wild Card lead Kristin MacCuish. They clung to each other for an extended period, neither willing to let go and both crying. “I was having a lot of extra emotions because I was playing against my niece. It (playing against her) doesn’t get any easier,” said Officer a few minutes later while trying to wipe away the tears she was still shedding. “It’s just so hard, I’m so proud of her and her team. They did so good. But I’m proud of us for battling. It wasn’t our greatest game of the week. We played a lot better games. Jen came up with some big shots.” Einarson, third Selena Kaatz, second Liz Fyfe and MacCuish won the wild card game against Chelsey Carey of Calgary 10 days ago to get the 16th and final spot in the Scotties. “We were in control and I knew that draw I missed for three (in the second end) was going to bite me in the butt, and it did, which was unfortunate. But it happens,” said Einarson, who was beaten by Jones in the bronze medal game of her first Scotties in 2016. “I was trying to leave her a tough shot (in the 10th end), and again she didn’t have to throw her last one which sucks because I really wanted to make her throw her last (shot). I didn’t really have much of a shot to hide around.” Throughout the game, Team Wild Card was the fan favourite at the South Okanagan Events Centre. “When they were cheering for us it just gave us so much more energy to keep going. That’s truly awesome. I really appreciate the fan support. It gives you goosebumps every time they cheer for you,” said Einarson. “We played well. We had a few shots we’d like to take back here, but that’s OK. I’m really proud of my team and myself for doing so well this week.” This is the first year of Curling Canada’s revised 16-team format, and the first time a wild card game to determine the final berth has been used, and Einarson took full advantage. The same system will be used at the 2018 Brier in Regina next month. Prior to this Scotties, Einarson had not beaten Jones in 17 tries, but she defeated her 9-4 in the round robin Wednesday night. Jones, however, came back with a 9-7 victory in the Page Playoff 1-2 game to advance directly to the final. Einarson had to outscore Mary-Anne Arsenault of Nova Scotia 12-9 in the semifinal Sunday morning. “It’s nice to see these young players lighting it up on the national stage,” said Jones of Einarson’s performance. “They played a heck of a game.” Standings and statistics for the 2018 Scotties Tournament of Hearts are available at www.curling.ca/scoreboard/ This story will be available in French as soon as possible at www.curling.ca/2018scotties/category/nouvelles/?lang=fr 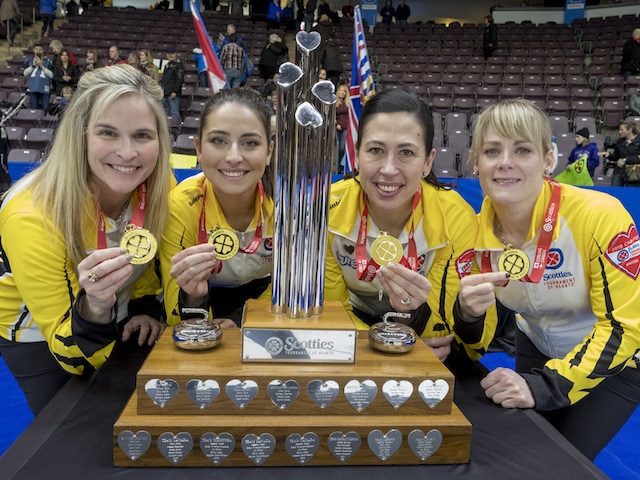