PENTICTON, B.C. — A current player and a long-time contributor to the business of curling were honoured during the playoff weekend of the Scotties Tournament of Hearts at the South Okanagan Events Centre in Penticton, B.C. The First and Second Team All-Star teams were also announced. The Marj Mitchell Sportsmanship Award was presented to Saskatchewan skip Sherry Anderson. The cherished Award is voted on by the curlers and is named in honour of the late Saskatchewan skip who won the first world women’s title for Canada in 1980. The award honours an individual who the competitors feel exemplifies the spirit of curling. It’s the fourth time Anderson has been recognized by her peers for this special award. 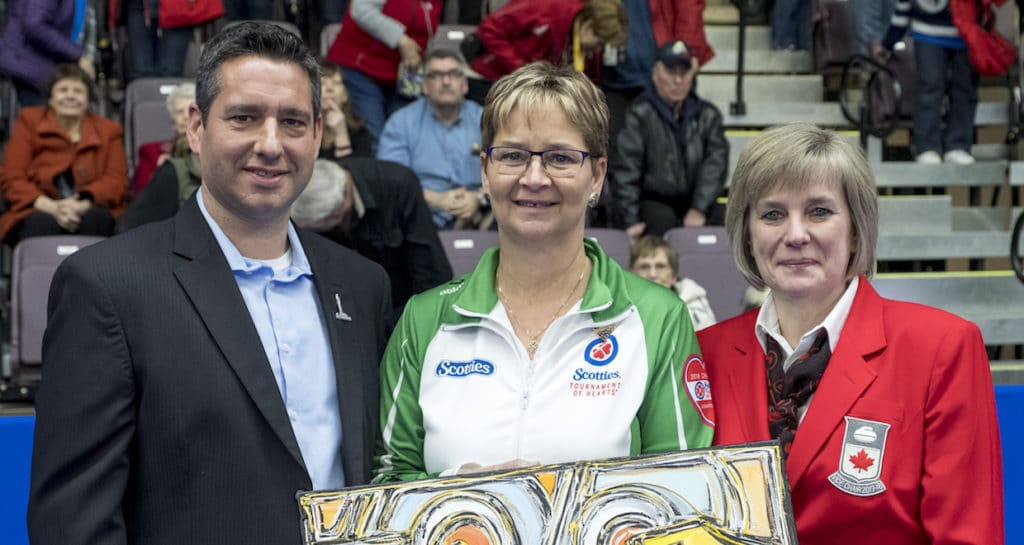 The Joan Mead Builder Award, meanwhile, was presented posthumously to David Beesley, Each year, this award is presented to an individual who has made a significant contribution to the growth and development of women’s curling in Canada. The Builders Award is named after Joan Mead, the late CBC producer who is credited with many innovative developments in curling broadcasting. Beesley, who passed away in January, was instrumental in using his marketing background to bring curling events such as the Scotties Tournament of Hearts and the Tim Hortons Brier to the forefront of Canadian sport entertainment, securing sponsors and attracting media partners to broadcast the Season of Champions events to curling fans across the country.

At the start of the week, British Columbia’s Melissa Soligo was also presented with a Joan Mead Award for her contributions to curling as a player, coach and High Performance Director at Curl BC. Christine Jurgenson, a four-time world championship gold-medallist representing Canada, was inducted into the Curling Canada Hall of Fame. Jurgenson’s first gold medal came in 1986, not long after she won the Scotties Tournament of Hearts in London, Ont., playing second with her sister (and fellow member of the Canadian Curling Hall of Fame) Marilyn Bodogh. At the 1986 World Championship in Kelowna, B.C., Jurgenson won gold after Team Canada beat Germany’s Andrea Schöpp in the final. Jurgenson would play in six editions of the Canadian Women’s Championships, representing three provinces (Ontario in 1980 and 1986; Alberta in 1983; B.C. in 1995 and 1997) in addition to one Scotties as Team Canada in 1987.

Second Team Skip — Tracy Fleury, Northern Ontario Third — Shannon Birchard, Manitoba Second — Jessie Scheidegger, Alberta Lead — Raunora Westcott, Canada * In the case of a percentage tie, the all-star position goes to the player with the highest plus/minus for the week (a player receives a +1 for every game in which he/she out-curls the positional opponent by five per cent or more). Should they still be tied, the pre-event draw to the button results are used to determine the all-star.