Canadian curling fans will have one more team to cheer for when the 2018 Winter Olympics get underway on Friday with the opening ceremonies in Pyeongchang, South Korea. 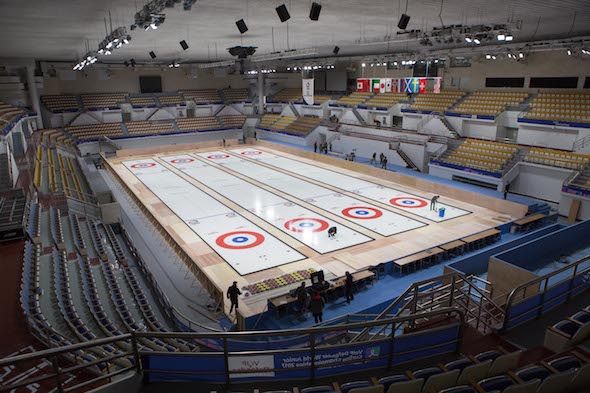 In fact, they can start cheering for them BEFORE the opening ceremonies as the inaugural Olympic mixed doubles competition begins on Thursday, with the duo of Kaitlyn Lawes (Winnipeg) and John Morris (Canmore, Alta.), with coach Jeff Stoughton, taking on Norway’s Kristen Moen Skaslien and Magnus Nedregotten at the Gangneung Curling Centre at 9 a.m. local time (Wednesday, 7 p.m. ET).

Eight countries qualified for the Olympic mixed doubles tournament; the teams will play a round-robin draw Thursday through Sunday, with the top four teams going into the semifinals (1 vs. 4, 2 vs. 3) on Monday, Feb. 12, and the bronze- and gold-medal games on Tuesday, Feb. 13.

Once the mixed doubles competition is done, the traditional four-player men’s and women’s competitions will begin, with the Canadian teams skipped by Calgary’s Kevin Koe and Ottawa’s Rachel Homan seeking to defend the gold medals won by Brad Jacobs of Sault Ste. Marie, Ont., and Jones four years ago.

Round-robin play will conclude on Feb. 21, with the top four teams going into the semifinals on Friday, Feb. 23.

You can CLICK HERE for the full list of team lineups for the mixed doubles and team competitions. Scores, statistics and standings will be available by CLICKING HERE.

CBC Sports, Canada’s Olympic broadcaster, will broadcast Canada’s curling matches, on CBC Sports television, streamed live online and on the CBC Olympics app for iOS and Android devices. You can CLICK HERE to see the CBC Sports broadcast schedule, and CLICK HERE for an overview of CBC’s broadcast plans.

Here are the complete round-robin schedules for all three of Canada’s Olympic curling teams (all times Eastern):

Since curling was re-introduced as a medal sport in 1998 at Nagano, Japan, Canadian teams have reached the podium at each Olympics.

Prior to that, Martin won the silver medal in 2002 at Salt Lake City, and Mike Harris (Oakville, Ont.) took silver in 1998 at Nagano.

Canadian women’s teams have won two gold medals — Jones in 2014 and Regina’s Sandra Schmirler in 1998 at Nagano — to go along with a silver — Calgary’s Cheryl Bernard eight years ago in Vancouver — and two bronze — Calgary’s Shannon Kleibrink in 2006 at Torino, and Kelley Law of New Westminster, B.C., in 2002 at Salt Lake City.

You can follow Team Canada at the Olympics on www.curling.ca. After each game, blogs from the Canadian curlers will be posted, with updates on the Games and the competition, and a peek into what life is like as an athlete at the Winter Olympics. As well, go to www.olympic.ca for updates on the whole Canadian team in Sochi.