OK, now it’s really hit me that I’m at the Olympics with Team Canada. 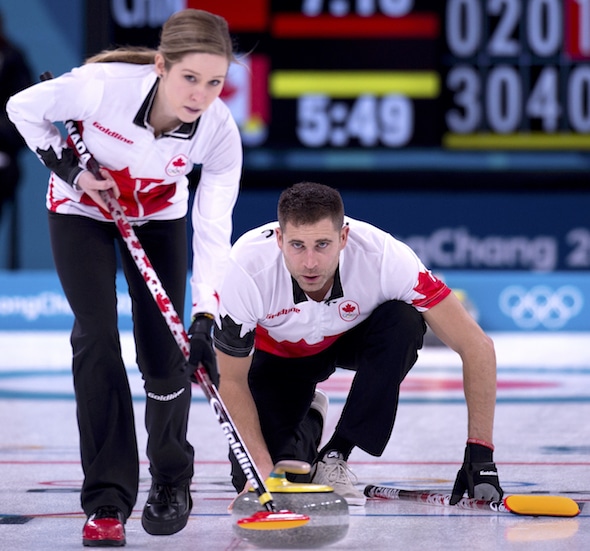 You see the ice, you see the crowds, and hear the cheering their hearts and souls out for the Korean team — we’ve actually been talking about trying to time it not to throw when the Korean team is throwing, because it gets very loud when they do, but you don’t really have any control over that.

All we can control is our own shot-making, and I really think Kaitlyn and John are showing improvement in every game. There were some little struggles early on this morning against China; we were pretty fortunate to get the three in the first end when we could have been forced to one; they could have got three or four right back in the second end (but only got two).

But from then on, it was pretty much full bore for Kaitlyn and John. I think we’ll start to see more teams making more good shots, because they’re getting more comfortable with the ice. As soon as you start putting the broom down in the right place, throwing the right weight, and feeling like that’s it, it feels fantastic, and John and Kaitlyn are definitely heading in that direction. We have another tough game today against Finland (11:30 p.m. ET) and I hope we’ll good signs then. 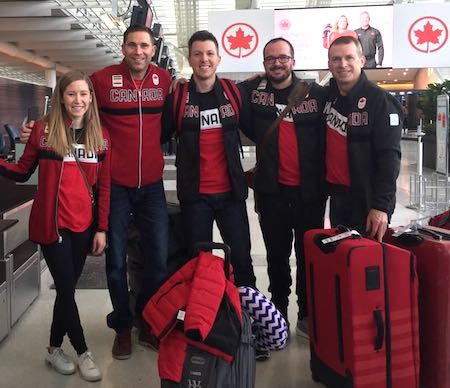 Team Canada got a great sendoff from Air Canada for its flight to South Korea!

In between games, I’m trying to keep in contact with my family (wife Hali, sons Riley and Cole, daughter Elizabeth) back home in Winnipeg. We’ve been keeping in touch every day with pictures and Facetime calls — you’re trying to share as much as possible when you’re away from home for this long. Pictures of the arena, the Athletes’ Village, all of the surroundings, just so that everyone at home can share in the experience. And I think all of the players and support staff can’t thank their family and friends enough for how they’re supporting us here.

The same goes for our employers, and I’m fortunate to have a great one. I’ve worked 32 years for Air Canada (currently as Manager, Financial Business Systems), and we got a great sendoff from Air Canada when we flew over here. Air Canada has been just fabulous, during my playing career and now my coaching career. We were on the plane and they announced that one of their own is heading off to the Olympics, and it was kind of cool to hear the people on the plane cheering. Just a lot of pride to share that with Air Canada, which is a darn good employer.

We’ve been over here together for more than a week now, and you’re seeing the team come together more every day, in the sense that you learn more and more about one another’s routines and habits, and I think that’s what will make them continue to get stronger and stronger as the week goes on. I think the whole sense of team is going to keep getting better, too, with the Koe and Homan teams now with us in the Athletes’ Village. The curling family keeps getting bigger here in Gangneung!