We all know this is not the start that we expected, but it’s the Olympics — we’ve seen strange things happen in the past. 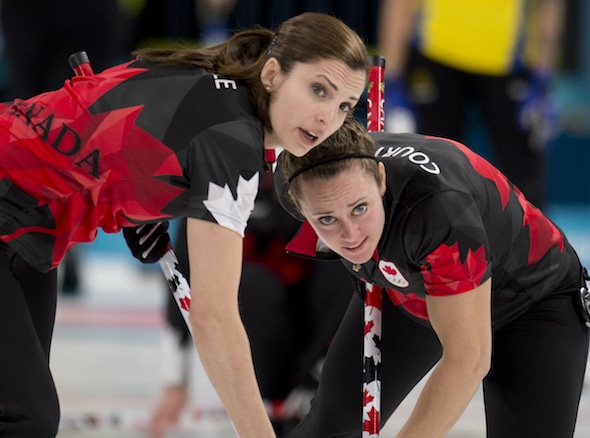 Cheryl Bernard and I were actually talking it after the game; we all know that Brad Jacobs won the gold medal at the 2014 Olympics in Sochi, but how many people remember that his team lost two of its first three games?

We also had a slow start at the Trials in Ottawa, and came back there, too.

The thing is, we know what kind athletes play on this team, and we know what they’re capable of, and there is a system in place that has worked in the past and will continue to work.

A lot of effort has gone into putting that system together, and a big reason it’s there is to deal with times like this, when things aren’t going your way.

What’s interesting is that the team really hasn’t played badly, and actually was only a couple half-shots away in each game from winning both of them. But you do have to give a lot of credit to our opponents today, South Korea and Sweden, because both of them played outstanding and were full value for their victories.

We knew coming out against the home team first, and then Sweden was going to be a difficult opening day, and even though we had higher expectations for victories, we did accomplish some very good things today.

The team developed some significant knowledge of the stones and ice conditions, and that’s always high on the priority list on the first day of a round robin.

The team also showed a great deal of resilience against Sweden. Giving up a steal of two in the first end can really put a team in a negative state of mind that it can’t get out of, but I was extremely proud of the way Rachel, Emma, Jo and Lisa scrapped their way into the extra end. That’s a big positive that we can build on going into tomorrow.

There’s no doubt this team has talent; that’s why they’re here in Pyeongchang. But just as important is the character of the team, its innate ability to overcome adversity. It’s an absolutely crucial component of any successful athlete or team of athletes, and I know that it will show through.

I’ve seen it so many times in the past, and it will come out over the final seven games of our round robin here.

Keep cheering for this team, Canada. You won’t be disappointed.

(Adam Kingsbury is the coach of Canada’s Olympic women’s curling team, and is participating in his first Winter Olympics. Keep checking curling.ca for blogs from Canadian athletes and coaches attending the Winter Olympics; you can watch a replay of the game by CLICKING HERE)