We know everybody’s been talking today about Rachel’s team, and we know the first three games haven’t gone the way they hoped.

I’ve gotten to know them very well over the last four years; they’re friends, and they’re a part of Team Canada — not only the bigger Canadian Olympic team, but also the Canadian curling team. So, we’re obviously rooting for them.

But they know, and every other team here, men’s and women’s, knows how good Rachel Homan’s team is. If they get rolling, start getting a couple breaks, start making a couple big shots here and there — you think they can’t win six in a row? Of course they can. They’re a great team.

They earned the right to be here. They’re representing  Canada, they’re under a microscope, and that’s tough. And the teams they’re playing, the teams we’re playing — these aren’t club curlers. These are the best of the best — it’s the Olympic Games. We play these teams week in, week out on the Tour and they beat us lots, and they beat Rachel lots. So it was never going to be a cakewalk. The Olympics are tough.

I hope they turn it around. We’re obviously behind them, and the rest of Canada should be behind them.

The Olympics take you a little bit out of your rhythm; it took us a couple games to find it, but I’m glad we’re back to dialled in; we had a great game tonight against South Korea. I hope Rachel’s team finds their rhythm, too.

It’s hard to compare Olympics, but, hey, Olympics at home, Olympics here — where ever they may be, I’m down with it. Playing at home in 2010 was amazing because of all of the family and friends who could come watch, the crazy crowds, and we went 11-0 and won — a perfect story. But it could have gone the other way for us and we’d be singing a different tune. 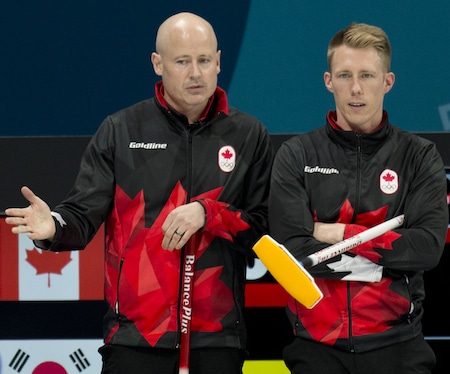 We rented a house for the Vancouver Olympics, but we’re staying in the Athletes’ Village this time, and it’s a little tight. Four dudes in a room? I haven’t lived like that since I played junior football. John Dunn and Scott Pfeifer are sharing one room, and Brent and I each have our own small bedroom. But there’s not a lot of personal room in apartment. It’s a little different than having your own hotel room with the comfy king-size bed in Canada.

But you know what? It’s awesome, it’s the Olympics, we’re 4-0 and I’ve got a big smile on my face going into tomorrow.

(Ben Hebert is the lead for Canada’s Olympic men’s curling team, and is playing in his second Winter Olympics. Keep checking curling.ca for blogs from Canadian athletes and coaches attending the Winter Olympics; you can watch a replay of the game by CLICKING HERE)