We were very excited coming off the ice tonight, because we really felt like the team we expected to be at the Winter Olympics. 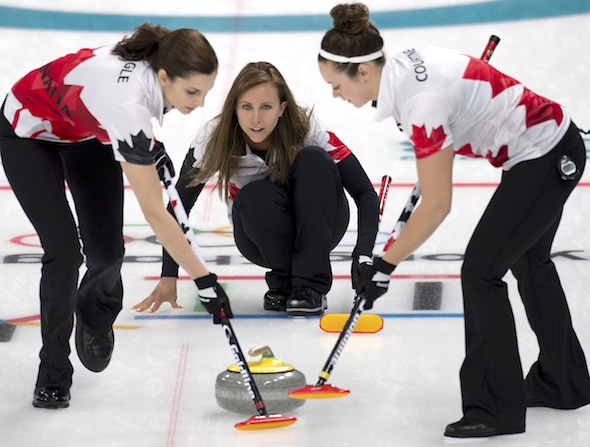 We had a team meeting after the game against Denmark yesterday, and I think the big thing for us was being able to just let go of the first two days. There was nothing we could do about it; there was no point in dwelling on it because we couldn’t change it.

So, going forward today, we said it’s a fresh event. We just have to climb through the C-side of the tournament, and we’ve done that many, many times before. It’s not unlike us to come through an event the hard way and get right to the top. But we know it’s going to be a battle. Every team here has earned the right to be here, and every team here is very talented.

We wanted to come out today against the United States and have fun, enjoy this whole experience — it’s the Olympics, and we’re privileged to be here. I think that if we go into games feeling the cloud of, ‘Well, we started 0-and-3 and we can’t rally back from that,’ well, then not only are we not going to enjoy this experience, we won’t be successful with that mindset.

So every game we come out for the rest of the round robin, we’ll do whatever we need to do to get ourselves into that same headspace that we had tonight. If somebody goes out and shoots a hundred and beats us? Well, we did everything we could do.

The first three games, with a couple shots here or there, we could be 3-0. We weren’t getting crushed. We were in every game, but we knew that after winning the world championship last year, no one is going to give us an easy game. They’ll give us their best game, because they’ll come out with nothing to lose. We knew that before we came here. No one is going to make it easy for us. We’re going to have to control that destiny on our own, and we can only do that one game at a time.

Definitely we played with less pressure tonight, but I also think putting our four heads together really made a difference. It’s hard when we’re learning a new building, new ice conditions, for Rachel to do that all on her own. We rallied together and used four heads instead of one, and supported each other out there. If we make a decision on what we feel the ice is going to do, and we’re wrong, it’s a collective team decision and we move on from that.

Our first time at the World Championship in 2013, we were kind of backs-against-the-wall to start out as well, and kind of clawed our way back in. We rallied back and managed to qualify for the playoffs. So we don’t expect this to come easy; we know that we’re going to have to really tough it out here, but at least we destiny in our own hands.

We’re going to do everything we can, and try our best for Canada. We can hear your cheers, and it makes us proud to be Canadian!

(Emma Miskew is the vice-skip of Canada’s Olympic women’s curling team, and is participating in her first Winter Olympics. Keep checking curling.ca for blogs from Canadian athletes and coaches attending the Winter Olympics; you can watch a replay of the game by CLICKING HERE)