The 2018 Tim Hortons Brier, presented by Mosaic, is set to begin March 3 in the Brandt Centre at Regina, where a new competition format will be unveiled for the Canadian Men’s Curling Championship. 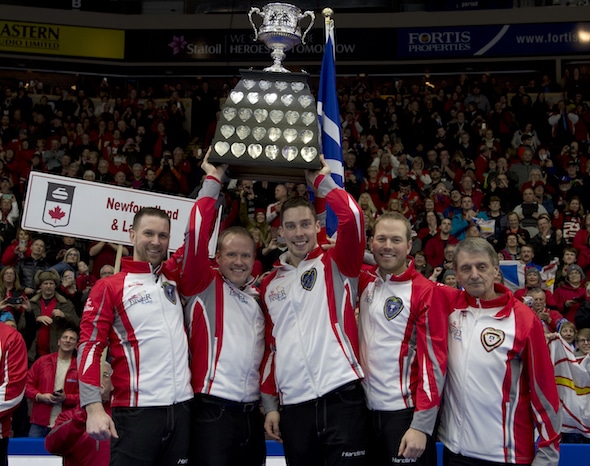 Sixteen teams, representing the 14 Curling Canada member associations, Team Canada (last year’s Brier winner) and the winner of the Wild Card game on Friday (Mike McEwen vs Jason Gunnlaugson) have been seeded (by the CTRS standings, as of Dec. 31, 2017) and separated into two pools.

They’ll first play a round robin within their pool, after which the top four in each advance to the Championship Pool for four games against teams from the other pool. Upon completion, the top four teams (best overall won-lost records) proceed to the Page Playoffs on Saturday (1 vs 2, winner to final, loser to semifinal; 3 vs 4, winner to semifinal, loser eliminated).

Heading the field is Team Canada’s Brad Gushue, who will make his 15th Brier appearance but first for Team Canada after previously representing Newfoundland/Labrador. Last year, in his home town of St. John’s, Gushue finally won the Canadian men’s curling championship, beating Team Canada’s Kevin Koe, 7-6 in a dramatic final. His team then won the Ford Worlds in Edmonton while undefeated.

In Pool A, joining Gushue, who also won a gold medal at the 2006 Winter Olympics and a Canadian and world juniors title in 2001, will be the Wild Card game winner, Alberta’s Brendan Bottcher of Edmonton, Nova Scotia’s Jamie Murphy of Halifax, British Columbia’s Sean Geall of Kelowna, Yukon’s Thomas Scoffin of Whitehorse, Newfoundland/Labrador’s Greg Smith of St. John’s and Yellowknife’s Jamie Koe of the Northwest Territories.

Koe makes his 12th Brier appearance while Bottcher, the 2012 Canadian and world junior champion who made his Tim Hortons Brier debut last year, is skipping one of seven Brier teams that also competed in last December’s Tim Hortons Roar of the Rings at Ottawa, won by Alberta’s Kevin Koe.

Carruthers won the 2011 Tim Hortons Brier and Ford Worlds when playing second for Jeff Stoughton, while Jacobs captured a gold medal in the 2014 Winter Olympics at Sochi, Russia, after also winning the Tim Hortons Brier in 2013.

Laycock is a former Canadian and world junior champion in 2003 who has earned bronze medals at two Tim Hortons Briers. He’ll be trying to win an eighth Tim Hortons Brier for Saskatchewan, the last by Rick Folk in 1980.

Grattan makes his 12th Tim Hortons Brier appearance, with bronze medals in 1997 in his debut and in 2002, when playing third for Russ Howard.

The Mike McEwen team, a silver medallist in the 2017 Tim Hortons Roar of the Rings and bronze-medallist in the 2017 Tin Hortons Brier, will have to get by fellow Manitoban Jason Gunnlaugson in the Wild Card game (between the two highest-ranked teams on the CTRS that did not win its provincial championship) on Friday, which follows an afternoon-long Ford Hot Shots competition, when a fan will win a two-year lease on a 2018 Ford Escape.

Admission to the Brandt Centre is free on Friday and the day’s schedule also includes an arena autograph session with Canada’s 2018 Olympic men’s curling team, skipped by Kevin Koe. CLICK HERE for Friday’s schedule of events. 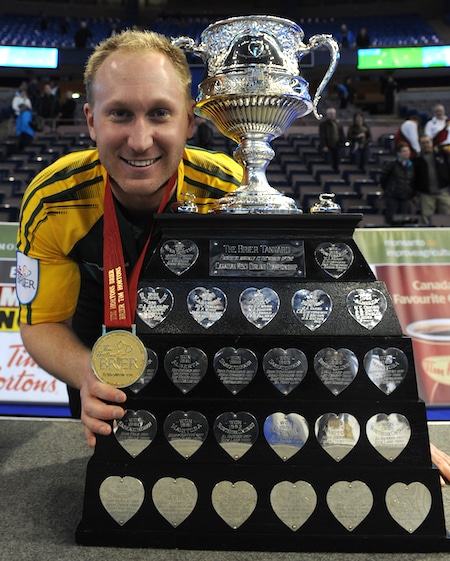 Brad Jacobs will be looking for his second Tim Hortons Brier victory after his 2013 win in Edmonton. (Photo, Curling Canada/Michael Burns)

This is the 14th year of Brier title sponsorship by Tim Hortons, one of North America’s largest restaurant chains in the quick-service segment.

The winning team will represent Canada at the World Men’s Curling Championship, presented by Ford of Canada, March 31-April 8 at Las Vegas. The winner will also defend its title as Team Canada in the 2019 Tim Hortons Brier at Brandon, Man., March 2-10, and should it medal at the Worlds, will also earn a berth into the 2019 World Financial Group Continental Cup (site/date TBA).

The Tim Hortons Brier has been played in 31 cities across Canada, from Victoria to St. John’s. Manitoba and Alberta are tied for most victories with 27 apiece. New Brunswick, Prince Edward Island, Yukon, Northwest Territories and Nunavut have yet to win.

The Brandt Centre, part of the Evraz Place complex, has hosted many major curling events, most recently the 2011 Ford World Men’s Curling Championship, won by Canada’s Jeff Stoughton. The Tim Hortons Brier has been played here twice — in 2006 (won by Quebec’s Jean-Michel Ménard) and 1992 (won by Manitoba’s Vic Peters).

CLICK HERE for the 2018 Tim Hortons Brier schedule. Tickets can be purchased at the Brandt Centre box office, online at curling.ca/tickets or by phone (1-855-985-5000).

TSN/RDS2 will provide complete coverage of every draw of the 2018 Tim Hortons Brier. CLICK HERE for the complete broadcast schedule.