REGINA – Mike McEwen exhaled and pumped his fist in victory as the shot from opposing skip Jason Gunnlaugson came to rest an inch or so wide, allowing McEwen’s Winnipeg squad to become Team Wild Card at the 2018 Tim Hortons Brier, presented by Mosaic. 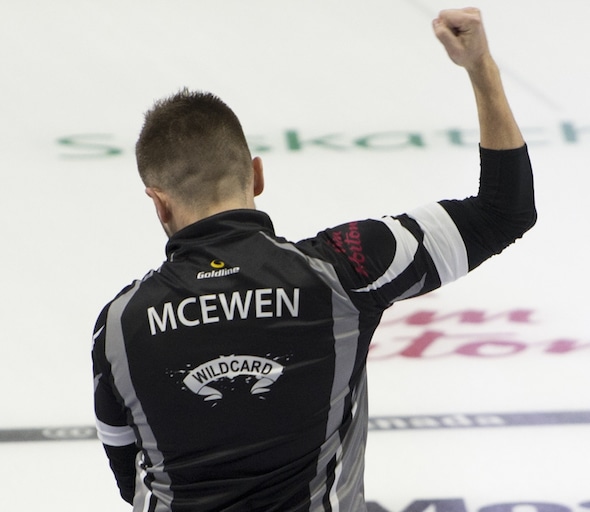 On his first shot in the extra end Friday night at a lively Brandt Centre, Gunnlaugson came out of the hack slowly but when he felt debris under the stone when it was still in his grip, he tried to dislodge it by rocking it, and then simply threw it hard in hopes of removing at least one McEwen counter. That gave McEwen the opportunity to make a hit to lie four, forcing Gunnlaugson to attempt to draw the edge of the button for the win. But he was a shade wide and McEwen triumphed 4-3 instead. Now McEwen, third B.J. Neufeld, second Matt Wozniak, lead Denni Neufeld and coach Chris Neufeld will open Pool A play by taking on the Yukon’s Thomas Scoffin (Whitehorse) in the second draw Saturday (7 p.m.; all times Central). “I can’t remember the last time we’ve had a break to win a game, or stolen a game,” said McEwen, the Tim Hortons Brier bronze-medallist last year in St. John’s. “We’ve had a lot of heartbreaking losses along the road where teams are drawing to win and haven’t missed. I can’t really think of a really important game that we’ve stolen in just so long. It was exhilarating. It actually doesn’t feel real that we won.” One of those heartbreaking losses would include the Tim Hortons Roar of the Rings final when Kevin Koe made a tense last-shot draw to capture Canada’s Olympic berth.

The two Winnipeg teams were invited to play the wild card game as the top two squads in the Canadian Team Ranking System that had not won a provincial/territorial title. It was McEwen who suggested to Curling Canada that the 16th team in the new format be determined in such a manner. “Maybe it’s fate that I got put in that situation,” said McEwen. “I was the first one to blurt it out as an idea that made sense for this championship under the format. I still think it makes sense. Look at the crowd tonight. That was tremendous.” In the 10th end, Gunnlaugson blew five rocks out of the house with his final shot, including McEwen’s shot stone that appeared to be frozen, forcing McEwen to draw to go to the extra end. “We played one of the best teams in the world, we controlled the whole game, we had the shot to win, we throw it a little bit heavy by two inches maybe. It’s crushing but you can’t be more proud of the effort,” said Gunnlaugson, who admitted he hasn’t had a pick come at a worse time. After it was over, McEwen gave Gunnlaugson a pat as he shook his hand. “Wow, did Jason’s team impress me. If there was an advantage on comfort and stress, he didn’t show he was under the gun or anything like that. We felt as comfortable as a team could feel in a situation like that,” said McEwen, who called the pick on Gunnlaugson’s first shot ‘awful’. “If he makes it, he’s going to have a much easier shot to win. You don’t like to see that.” After being the Manitoba champ the last two years, McEwen lost the provincial final to Reid Carruthers last month. He spent most of the provincials in hospital with chicken pox while the rest of his team played as a three-man unit before he rejoined them for the final. McEwen said he suffered some liver damage as a result but is lucky the liver is quite regenerative. “I won’t be going to the Patch and having fun there,” said McEwen with a laugh. “I can’t do that. Not until things get better.” The 2018 Tim Hortons Brier, presented by Mosaic, opens with draws Saturday at 2 p.m. and 7 p.m.