REGINA — Reid Carruthers is accustomed to walking off the ice and walking into a phalanx of media microphones following big-event curling games; it goes with the territory of being a skip. 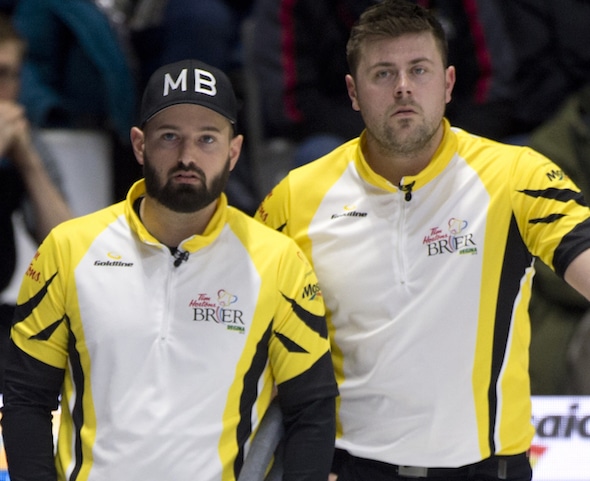 Reid Carruthers, left, and Braeden Moskowy are off to a 2-0 start at the 2018 Tim Hortons Brier. (Photo, Curling Canada/Michael Burns)

But’s a little different at the 2018 Tim Hortons Brier, presented by Mosaic. Even though Carruthers has skipped Manitoba to a 2-0 start at the Brandt Centre, and even though he won a Ford World Men’s championship gold medal in this building in 2011 playing second for Jeff Stoughton, it’s Carruthers’ broad-shouldered vice-skip, Regina-born-and-raised Braeden Moskowy, who is getting all the attention on opening weekend at the Brandt Centre.

“That’s good; it takes the heat off me,” said Carruthers with a smile. “Normally I have to do all these interviews, so we can let the star of the show get his limelight for the week here in Regina.”

The Carruthers team — including Moskowy, and rounded out by second Derek Samagalski, lead Colin Hodgson and coach Dan Carey — improved to 2-0 on Sunday morning, grinding out a 7-5 extra-end win over Saskatchewan’s Steve Laycock (0-2; Saskatoon).

Moskowy, the 2011 Canadian junior men’s champ (with Saskatchewan second Kirk Muyres as his vice-skip), still lives in Regina (he’s the team’s one allowed non-Manitoba resident), so he knew he’d be in the spotlight once Team Carruthers won the Manitoba title.

“It’s an odd feeling; there are a lot more demands being put on me, getting pulled in different directions, whether it’s media stuff, tickets — it’s something that probably skips are more accustomed to doing,” he said. “But I wouldn’t trade it for the world, that’s for sure.”

His dad, Kelly, represented Saskatchewan at the 2002 Brier in Calgary, and took part in Saturday’s Opening Ceremony as a past Saskatchewan champ.

And while those Saskatchewan curling roots run deep, Braeden says his dad isn’t opposed to putting on some Manitoba colours to support his son.

“He’s fully on-board,” said Moskowy with a chuckle. “I don’t think it’s a big ask; not as big of an ask as trying to get someone to trade in their Rider jersey for a Bomber jersey.”