Both Tyler Tardi and Kaitlyn Jones earned crucial wins on Tuesday to keep the playoffs in sight at the 2018 World Junior Curling Championships in Aberdeen, Scotland. 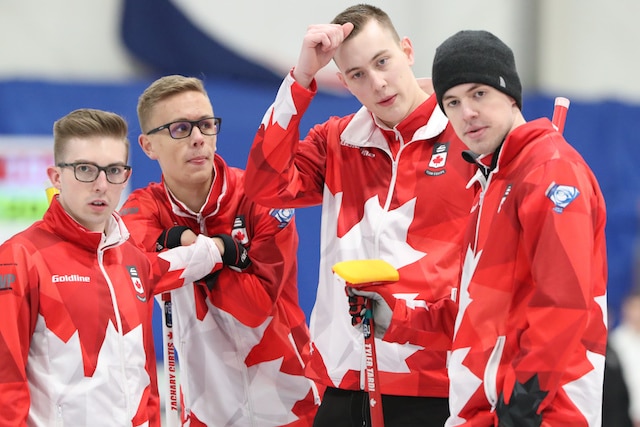 Tardi, third Sterling Middleton, second Jordan Tardi and lead Zachary Curtis, with alternate Jacques Gauthier and coach Paul Tardi started the day with a 7-5 loss to China’s Zhiyu Wang, but rebounded in the afternoon with an extra-end 8-7 win over Norway’s Magnus Ramsfjell. The Canadian men (4-2) now join a three-way tie for second place with Switzerland and the United States, both of whom Canada defeated in round-robin play. The top four teams move on to playoffs after the round robin concludes on Thursday. “Obviously the first goal is just to make playoffs, but we don’t want to look too far ahead of ourselves,” said Tardi after the win. “It’s a bit of a grind sometimes because the other teams here are so great.” Tardi says he’s dealing with the championship pressure by relying on experience gained earlier this season. “I’m not really feeling much pressure to be honest, and a lot of that comes from the experience of playing on the tour this year. We’ve played against some of the bigger names in Canada, and that definitely helps,” he said. “We only really felt pressure in the first game with the weight of the Maple Leaf on our back, but ever since then it’s been easing off.” In women’s action on Tuesday, skip Kaitlyn Jones and her Halifax team of third Kristin Clarke, second Karlee Burgess, lead Lindsey Burgess, alternate Lauren Lenentine and coach Andrew Atherton had their hands full against Russia’s Vlada Rumiantseva in their only match of the day. 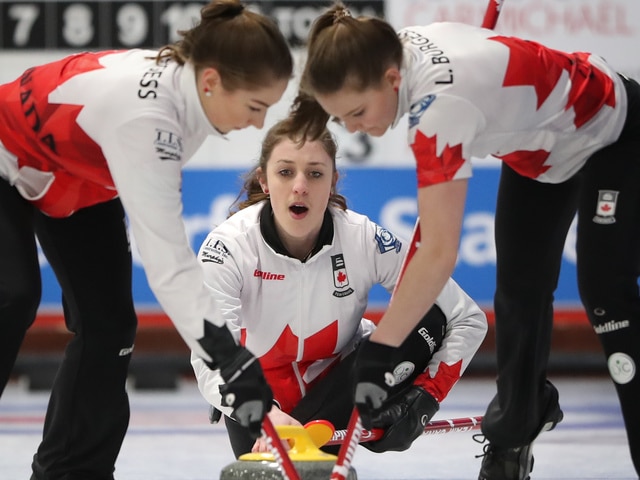 After giving up three points in the fifth, Canada bounced back with three of their own in the sixth to tie the game 6-6, then went on to steal the next two ends for a 9-6 victory. “We knew at the fifth-end break that we’d have to play a little bit stronger in the second half, and we started capitalising on all of the misses that we were making early,” said Jones. “The second half went a lot better because we were making the shots and trusting the ice. We were a little bit shaky in the beginning with not knowing where to put the broom, but we really picked up on that after the fifth end.” Jones now has a solid hold of second place in the standings with a 5-1 record, trailing undefeated Sweden (6-0). The round robin continues on Wednesday with the men facing South Korea (9 a.m. ET). The women will play two games, starting off against Switzerland (4 a.m. ET) and finishing the day against Norway (2 p.m. ET).

The Canadian teams will be in a 10-team (of each gender) round-robin draw that leads to the four-team Olympic-style semifinals (first place vs. fourth place; second place vs. third place), on Friday, March 9 (there will be no playoff tiebreakers).