REGINA — An 0-2 start to the 2018 Tim Hortons Brier has been long forgotten by Steve Laycock’s Saskatchewan team, and a three-game win streak has revved up the crowd at the Brandt Centre. 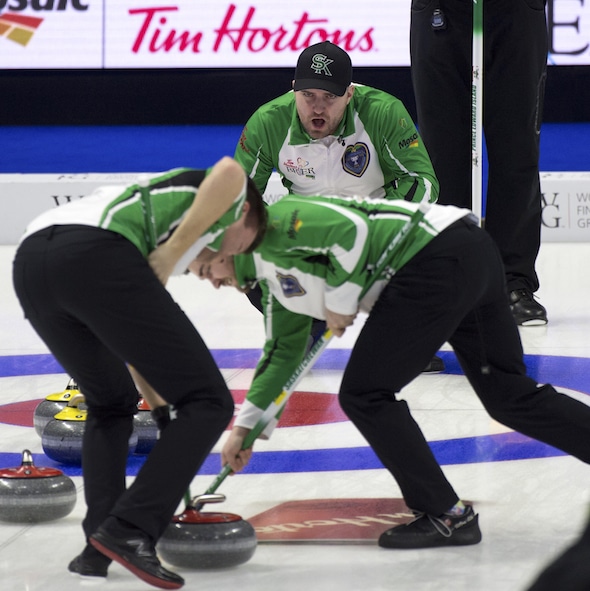 More importantly, suggested Laycock, was the fact that it was a win over one of the top-seeded teams in Pool B; Northern Ontario was seeded third in the 16-team field, while Saskatchewan was seeded seventh.

“Even if we had made it to the next round without beating any of the top-seeded teams, we’re 3-and-4, in a tiebreaker — chances of winning the Brier are next to zero,” said Laycock, whose 3-2 team is rounded out by vice-skip Matt Dunstone (who throws last rock), second Kirk Muyres, lead Dallan Muyres, alternate Lyle Muyres and coach Pat Simmons. “You could probably win all of the Championship round games and still miss the playoffs. So we needed to knock off at least one of them. I don’t want to look past Nunavut tonight, we need a win there, too. But if we can finish with (a win over) Ontario, we’re actually in a pretty good spot heading into the Championship round.”

A dramatic 7-6 extra-end win over P.E.I.’s Eddie MacKenzie on Monday afternoon, a win that wasn’t nailed down until Dunstone made a touchy hack-weight hit on a partially buried stone with his final delivery, provided a definite boost, said Laycock.

“I think that win showed that we can scrap,” he said. “We weren’t playing our best in that game at certain times, but we scrapped our way through it and got a win. We came out with a bit of edge today, we got hammer in the first, and all it takes is a couple misses and a big end can sneak up on you with hammer.”

That big end came early as Saskatchewan scored four in the second end, and never looked back.

The other Pool B unbeaten squad also suffered its first loss on Tuesday, as Manitoba’s Reid Carruthers (West St. Paul) bowed 10-5 to Ontario’s John Epping (Toronto), leaving both teams at 4-1 and tied with Northern Ontario. Ontario cracked a five in the ninth end to prompt handshakes.

In other games Tuesday morning, Quebec’s Mike Fournier (Dollard-des-Ormeaux) snapped a three-game losing streak with an 8-3 win over Nunavut’s Dave St. Louis (0-5;  Iqaluit), and New Brunswick’s James Grattan (2-3; Oromocto) scored three in the ninth end and stole two in the 10th for a 9-6 win over P.E.I. (1-4; Charlottetown).