REGINA — If you believe in the concept of certain victories making statements about your team, Brendan Bottcher’s Alberta champs accomplished that Wednesday morning at the 2018 Tim Hortons Brier, presented by Mosaic. 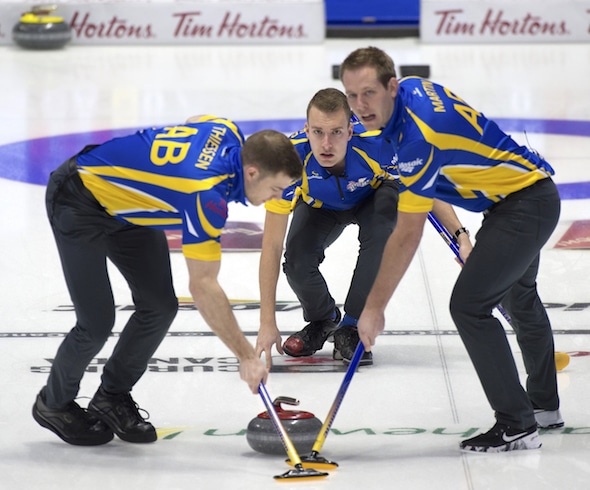 Bottcher’s Edmonton-based team — the same lineup in body, but certainly not in confidence, that went 3-8 a year ago at the 2017 Tim Hortons Brier in St. John’s — put together its most impressive performance of the week so far at the Brandt Centre, rolling to a 10-7 win over defending champ Brad Gushue and his Team Canada foursome from St. John’s.

That result left Alberta, Team Canada and Mike McEwen’s Wild Card team from Winnipeg tied for the lead in Pool A with 5-1 records heading into tonight’s final round of preliminary pool play at 7 p.m. (all times Central).

The top four teams from Pool A and the top four from Pool B will head to the Championship Pool, with games starting Thursday.

“I think so,” said Bottcher, the 2012 world junior champ, replied when asked if his team had made a statement with the victory. “I think we’ve been building throughout this week. I don’t think we played quite as well as we needed to the first two, three, even four games. But yesterday I told you I thought we were feeling it a little bit more, and that was important because today was going to be a really hard day. I thought the guys came out and carried that forward, and hopefully we can play that well again tonight against McEwen.”

The preliminary round records will be carried forward into the Championship Pool, where the four teams from Pool A will meet the four Pool B survivors; then, the top four records (11 games in total for each team) will go into the Page playoffs, beginning Saturday.

Bottcher, backed up by vice-skip Darren Moulding, second Brad Thiessen and lead Karrick Martin, showed some resilience against Team Canada; after stealing one to open the game, Alberta surrendered a three to Canada and was held to just one in the third, leaving the momentum advantage firmly with the champs.

But forcing Canada to take one in the fourth helped get some back, and it was taken back for good an end later when Alberta cracked a go-ahead three and never trailed again

“I thought maybe the first two or three ends, we weren’t quite our normal selves, but we fell into it a little bit, got the scored tied up, and I thought the guys played great for me,” said Bottcher. “After we gave up that three, and Brad made such a good shot for that three, we were really focusing on trying to score, then force them, and then get our deuce back. Then were back to even, so that force kind of set us up for the shot for four; we ended up with three, but it was a big momentum switch.”

While Alberta finishes tonight against team Wild Card, Canada will take on Newfoundland/Labrador’s Greg Smith (1-5) in a battle of St. John’s teams, with Gushue hoping for a better effort.

“What was disappointing there was how we played,” said Gushue. “I was left with a lot of difficult ones, and just didn’t make them. I made a few of them, but it seemed like every end I was playing an in-off or a double or a runback; it was a frustrating game, a lot of bad throws. As much as I talked yesterday about how I liked how we were throwing it, I didn’t like it so much today. Hopefully that was just an anomaly and we’ll be back to ourselves tonight.”

Team Wild Card kept pace with the lead group with a 6-2 win over Newfoundland/Labrador.

In the other games, Nova Scotia’s Jamie Murphy (3-3; Halifax) took a big step toward making the Elite Eight with a 7-4 win over the Yukon’s Thomas Scoffin (1-5; Whitehorse), while Jamie Koe’s Northwest Territories team from Yellowknife (2-4) stumbled in its own bid to make the Championship Pool, falling 7-3 to B.C.’s Sean Geall (2-4; Kelowna).

A Nova Scotia win over B.C. tonight will clinch the final Pool A Championship Pool berth; a B.C. win would set up a tiebreaker draw on Thursday morning.