Team Canada women will play for medals; men close in on playoff berth at World Juniors

Kaitlyn Jones is through to the semifinals of the 2018 World Junior Curling Championships and Tyler Tardi is one step closer to a playoff berth after a winning day for both Canadian teams on Wednesday in Aberdeen, Scotland. 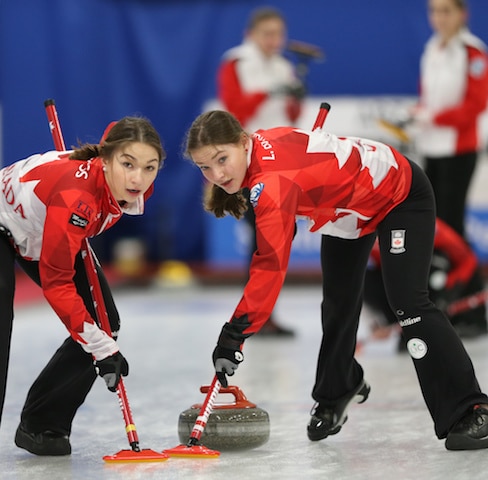 Jones and her Halifax team of third Kristin Clarke, second Karlee Burgess, lead Lindsey Burgess, alternate Lauren Lenentine and coach Andrew Atherton confirmed their spot to the playoff round with a 10-7 win over Switzerland’s Selina Witschonke in the morning draw. “I think this is about where we were when we were playing at the Canadian Juniors,” said Jones. “So we’re feeling really good and continuing to move forward.” With an 8-6 win over Norway’s Maia Ramsfjell on Wednesday afternoon, Jones ended the day with a 7-1 record, solidly in second place behind Sweden, the team she will face in the final game of the round robin. “We just play one game at a time and that’s what we were focusing on, but now that we’re finished we’re thinking about the Sweden game tomorrow,” said Jones after the win over Norway. “We’re going to come out and have a strong game and see where we stand against them. Sweden are the reigning world champions, so having that win on them would be really meaningful to us.” That game with Sweden will be streamed live on Thursday morning at 9 a.m. ET on the World Curling Federation YouTube channel, here: https://youtu.be/damtkDX5imw?list=PL_Fr_yXnOHvjkqfGgy0YamtGDJzVvTREg On the men’s side, Tardi, third Sterling Middleton, second Jordan Tardi and lead Zachary Curtis, with alternate Jacques Gauthier and coach Paul Tardi started their only game of the day with a huge six-ender against South Korea’s Hyeonjun Hwang and were never seriously challenged in a 10-3 win. 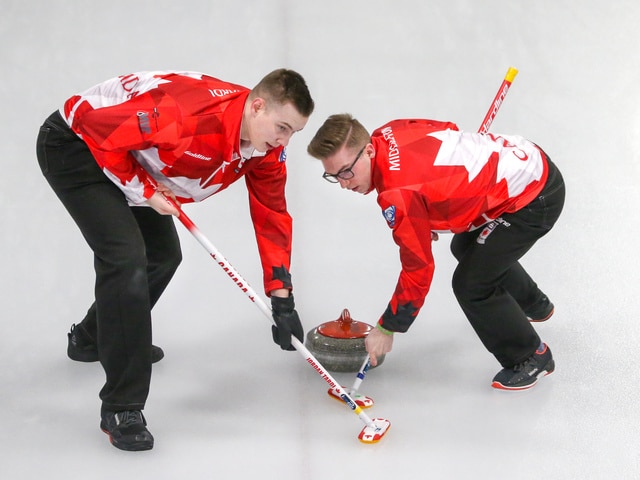 “That six was very unexpected to say the least,” said Tardi. “We knew they’re a good team at moving the rocks, but we got a few misses early and I don’t even know how it happened, we just got a six out of nowhere. We did a good job in keeping it open after that and not letting too many rocks accumulate and I think that’s what did it for us.” “It’s one step at a time,” said Tardi when asked about looking ahead. “I’m not sure if one more win does it, but it gets us close, so we’re just going one step at a time and hopefully we’ll qualify for the playoffs.” The men will know whether they are headed to the semifinals after playing their final two games of the round robin on Thursday against Russia’s Aleksandr Bystrov (1-5) at 4 a.m. ET and Germany’s Sixten Totzek (3-4) at 2 p.m. ET.