Semifinals for Team Canada men and women at World Juniors

Team Canada’s Tyler Tardi and Kaitlyn Jones wrapped up the round robin in second place at the 2018 World Junior Curling Championships on Thursday. Both teams will move on to Friday’s semifinals at Curl Aberdeen in Aberdeen, Scotland. 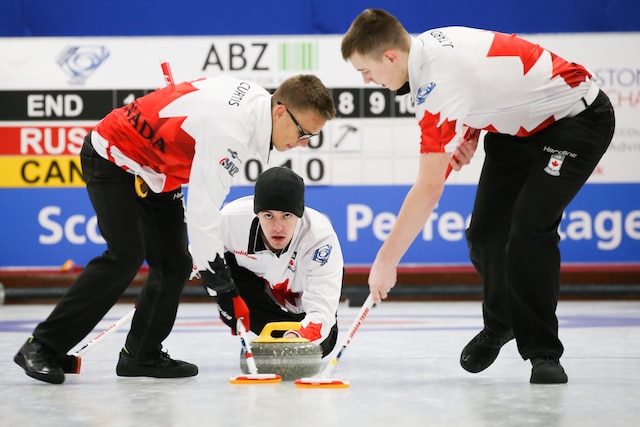 Tardi, with third Sterling Middleton, second Jordan Tardi, lead Zachary Curtis, alternate Jacques Gauthier and coach Paul Tardi, finished off the round robin with confidence, taking a 7-5 win over Russia in the morning, then cruising to a 4-2 win over Germany in the final draw on Thursday evening at Curl Aberdeen. “It feels petty good to qualify, especially after last year – that was disappointing to say the least,” said Tardi who finished out of the playoffs in fifth place at the 2017 championships. “We fought to get back here and I’m really proud that we were able to come back and make the playoffs.” With the win, Tardi and crew finish in second place with a 7-2 record, just ahead of third-place Andrew Stopera of the USA, who also finished 7-2, but who lost to Canada in the round robin. The two teams will meet again in the semifinal on Friday, while undefeated Scotland will face off against fourth-place Switzerland. The game against USA will have an added significance for Tardi, thanks to a long-time friendship with Luc Violette, the USA third. “I’ve known Luc since I was about 11 because we had competitions between our two clubs growing up,” Tardi said. “We’re good friends on the ice and off the ice, so it’ll be good.” “To us having the hammer is huge,” he added, noting the importance of taking his second-placing standing into the semifinal. “They keep it a little more open than other teams and we usually have a big momentum boost when we have it.” 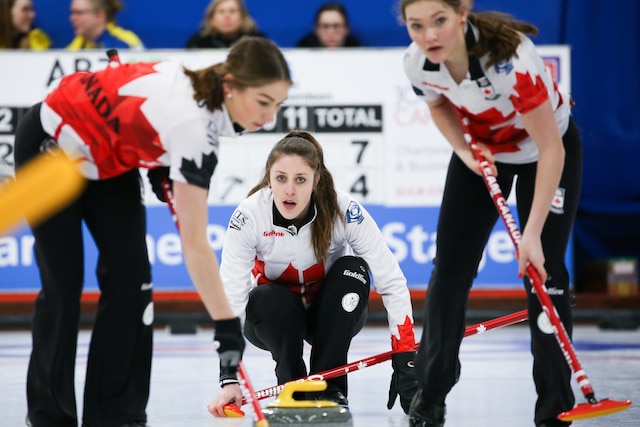 On Thursday afternoon, Halifax-based Kaitlyn Jones, with third Kristin Clarke, second Karlee Burgess, lead Lindsey Burgess, alternate Lauren Lenentine and coach Andrew Atherton, lost the final game of the round robin, 8-6 to Sweden’s Isabella Wranaa (9-0). Despite the loss, Canada finishes solidly in second place with a 7-2 record and will face third-place China (5-4) in one of the semifinals on Friday. Sweden will play Norway, the fourth-place finisher. The women’s semifinals take place on Friday at 9 a.m. ET, while the men take to the ice at 2 p.m. ET.