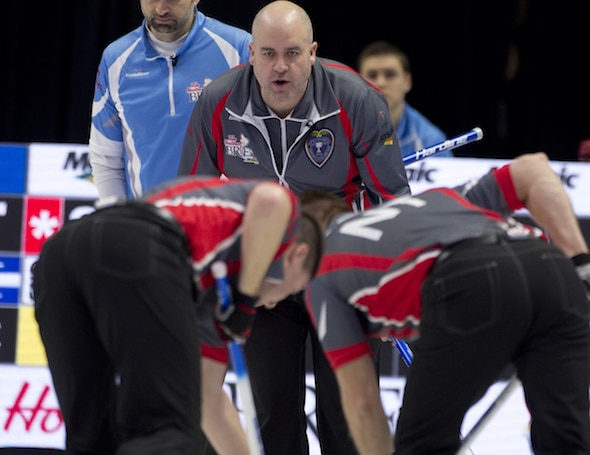 The eight teams that didn’t qualify for the Championship Pool were in action on Friday morning for the Placement Round games, which determined the final overall standings. Teams are awarded Canadian Team Ranking System points and prize money based on their final standings, which also are used to determine rankings for the season-long Member Associations Cup, presented by TSN, competition.

Both the Territories and Quebec placed fifth in their respective preliminary pools.

In the battle for 11th and 12th place, New Brunswick’s James Grattan (Oromocto) recorded the first seven-ender since 2000 on his way to a 12-5 triumph over a shortstaffed B.C. team from Kelowna skipped by Sean Geall; both vice-skip Jeff Richard and lead David Harper returned home as their wives are both expecting babies.

Prince Edward Island’s Eddie MacKenzie (Charlottetown) opened with four in the first end and added three more in the third in a 12-3 win over Newfoundland/Labrador’s Greg Smith (St. John’s) to decide 13th and 14th place.

In the other game, Thomas Scoffin’s Yukon team from Whitehorse was a 7-6 winner over Nunavut’s Dave St. Louis (Iqaluit) to decide 15th and 16th.

Play in the Championship Pool wraps up Friday with draws at 2 p.m. and 7 p.m. (all times CT).