Paralympic Curlers Strong Out of the Gate

The Canadian Wheelchair Curling team is treating the 2018 Paralympic Games in Pyeongchang, South Korea like a marathon. It won’t be won or lost on day one, and it will take a consistent effort over the 11-game round robin to set them up for a sprint to the finish line. While there is still a lot of curling to be played, they couldn’t be happier with their results out of the gate. 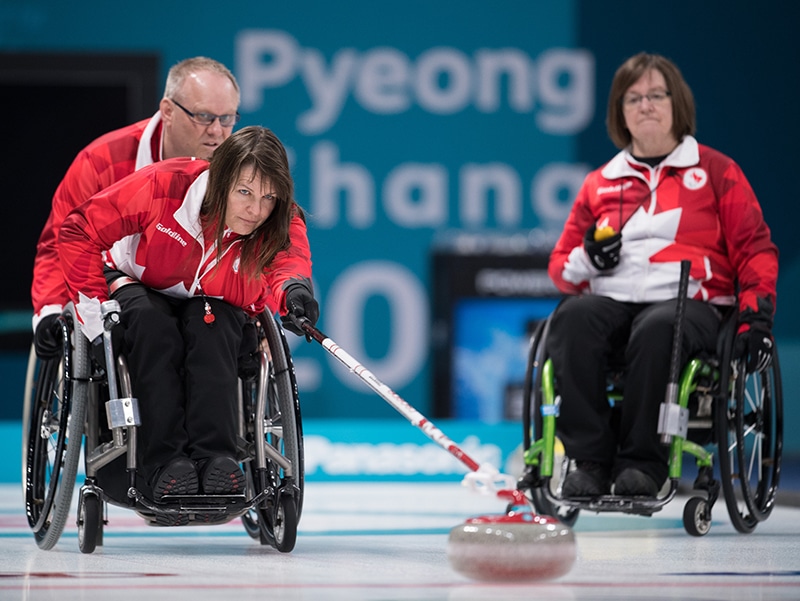 In their first game on this Paralympic marathon, Canada defeated Switzerland 8-0, with the Swiss conceding after the sixth end. “We’re pretty happy with that start,” said third Ina Forrest, playing in her third Paralympics. “We’ll take that any day.” It seemed Canada seized control of the game before it even began, with two good shots by Forrest and skip Mark Ideson, in the pre-game Last Shot Draw (LSD) challenge, to determine which team gets hammer in the first end. “There were a few nerves for the LSD (Last Shot Draw), and then once that was over, I was good!” said Forrest. “I was feeling really comfortable out there.” Comfortable may be an understatement. Forrest shot 81% in the game, nearly 20% higher than any other player. “I was very happy with how I played today. It’s nice to have that first one out of the way with a good result,” she said. Other than being the first win for Canada in this competition, it was the first Paralympic win for Mark Ideson as skip. Ideson, who was the alternate in the 2014 Sochi games, showed no signs of nerves and made several clutch shots, including a nose hit for two in the first, and a perfect freeze in the second end to set up a steal. After that, Canada was in cruise control, putting pressure on and benefiting from a few Swiss miscues. They stole one in the third and fourth, two in the fifth, and one more in the sixth before the Swiss decided to shake hands. With one win in the books, Canada will face Norway later tonight in their second game. Check cbcsports.ca for live streaming information.