NORTH BAY, Ont. – A red light is a red light … and it cost EunJung Kim of South Korea a victory Thursday at the Ford World Women’s Curling Championship. 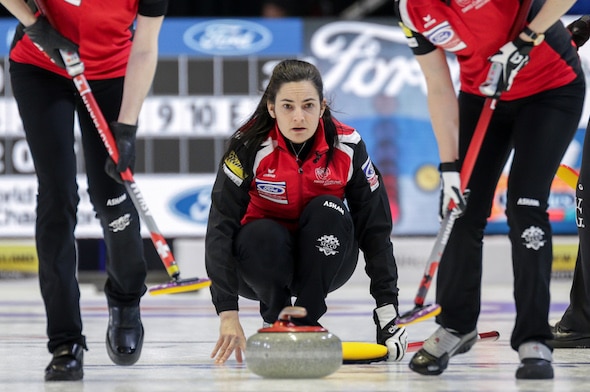 Kim committed a hog-line violation – which activates a red light on the stone – with her final rock in the 10th end, allowing Binia Feltscher of Switzerland to steal two for an 8-6 victory at the North Bay Memorial Gardens. “It felt like it was going to be a bit too strong, so then I just let go a little bit too late.” Kim said of the violation. “I’m not too upset about the actual loss. I’m upset about the red light coming on. It happened once before, in the seventh end.” Switzerland (4-5) jumped into an early lead with three in the first end but South Korea scored singles in the next three ends and a deuce in six to grab a 5-3 lead. The teams traded singles in the seventh and eighth before the Swiss scored two in nine and then the steal in 10. “It’s a different way to win … but a red light is a red light,” said Swiss third Irene Schori. “We knew it would be difficult game against the Koreans because they always freeze and tap. So we tried to do that also in the first end and we had a great shot for three.” Feltscher, Schori, second Franziska Kaufmann, lead Carole Howald, alternate Raphaela Keiser and coaches Al Moore and Manuela Netzer kept alive their narrow hopes of making the top six and qualifying for the playoffs. But they weren’t overly confident even after tying the game in the ninth. “Well, we thought we had a chance to steal (in the 10th) but (South Korean) made two tick shots,” said Schori. “But we were lying with two and she had to draw to the four foot.” South Korea let Kim’s red-light stone slide and it ended up on the edge of the button, but it was for naught.

The South Korean loss ensured that Canada’s Jennifer Jones (9-0) is assured of a top-two finish and a bye to Saturday’s semifinals. In the other afternoon games Yilun Jiang of China (4-6) defeated Diana Gaspari of Italy (2-8) 7-5, Jamie Sinclair of the U.S. (5-4) pitched a 6-0 shutout of Angelina Jensen of Denmark (3-7) and Daniela Jentsch of Germany (2-7) stole one in the extra end for a 3-2 win over Anna Kubešková of the Czech Republic (5-5). Jennifer Jones of Canada (9-0), Anna Hasselborg of Sweden (9-1), Victoria Moiseeva of Russia (6-3), Tori Koana of Japan (4-5) and Hannah Fleming of Scotland had the afternoon byes. The 2018 Ford World Women’s Curling Championship continues with the evening draw at 7 p.m. ET. Live scoring, standings and statistics for the 2018 Ford World Women’s are available at www.worldcurling.org/wwcc2018/livescores TSN and RDS2 will provide complete coverage of Canada’s games at the 2018 Ford World Women’s. Go to www.tsn.ca/2017-18-curling-broadcast-schedule-1.593081 for the complete schedule. For ticket information for the 2018 Ford World Women’s, go to www.curling.ca/2018worldwomen/tickets/ This story will be available in French as soon as possible at www.curling.ca/2018worldwomen/?lang=fr