Manitoba back in win column at Canadian Wheelchair championship

It was bounce-back day for Manitoba as they scored their first two wins on the third day of round robin play at the 2018 Wheelchair Curling Championship in Leduc, Alta. 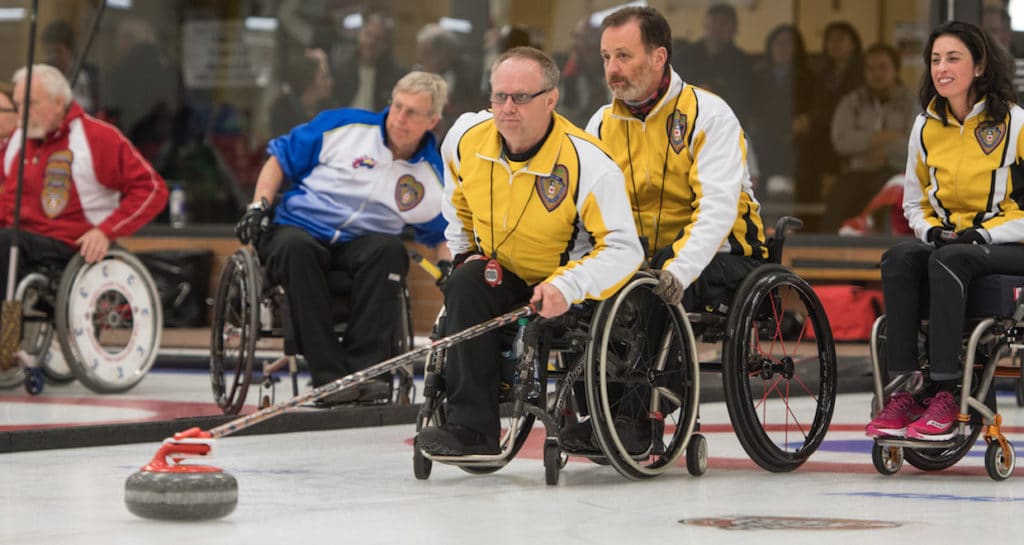 Dennis Thiessen and his Winnipeg team scored a 7-4 win over Newfoundland and Labrador’s Cecilia Carroll in the afternoon draw and cruised to an 8-2 win over New Brunswick’s Michael Fitzgerald. Theissen and teammate Jamie Anseeuw are fresh off a bronze-medal performance at the Paralympics in Pyeongchang, and coach Tom Clasper thinks the effects of travel and different training might explain the team’s slow start at the national championship this season. “We haven’t played a lot as a team this year,” said Clasper after the evening win. “Two of them were working towards the national stuff, and the others were working more on their own and getting some help from other people to better themselves, so we’re sitting at a situation where we’re just coming together and starting to curl.” “They were a little more consistent (today), in the groove more,” Clasper said. “We were putting our rocks in better spots than we did before, and if we missed, it didn’t hurt us.” With the two wins, Manitoba now sits at 2-3, tied with Quebec, and right behind a logjam of five teams tied at 3-2. Climbing up the standings is a distinct possibility. “Last year we lost the first couple of games and then we bounced back,” Clasper said. “It’s about feeling confident, and we’ll try to put another game together tomorrow. We just have to play well and see what happens.” Saskatchewan’s Marie Wright continues undefeated, leading her team of Gil Dash, Darwin Bender, Larry Schrader, Moose Gibson, Lloyd Thiele and coach Lorraine Arguin to a 10-4 win over BC’s Darryl Neighbour in the afternoon draw, and following that up with a 5-1 win over Northern Ontario to wrap up the day. In other games on Wednesday evening, British Columbia’s Darryl Neighbour moved to 3-2 with an 8-5 win over Alberta’s Jack Smart. Ontario’s Chris Rees stole five ends on the way to a 12-2 win over Nova Scotia’s Trendal Hubley-Bolivar. Despite giving up three in the final end, Newfoundland and Labrador’s Carroll hung on for a 5-4 win over Quebec’s Benoit Lessard. The round robin continues on Thursday with games at 3:30 p.m. and 8:30 p.m. ET.