Finding the perfect teammate is the “magic” of mixed doubles

After the first full day of competition at the 2018 Canadian Mixed Doubles Curling Championship the leaders are starting to emerge, but even going undefeated so far doesn’t mean this is going to be easy, says Joanne Courtney, who, with mixed doubles partner Reid Carruthers, scored another win on Thursday night to join a handful of teams with 4-0 records. “We’ve had four really tight games,” says Courtney, who won silver with Carruthers at the 2017 World Mixed Doubles Championship in Lethbridge, Alta. “The competition here is really strong. The names that people might not recognize at home are still the people that play a lot and we’ve had to really grind hard and stay tough out there because the competition’s just fantastic.” Other undefeated teams include Robert and daughter Emilie Desjardins, and Laura Crocker/Kirk Muyres in Pool A; Manitoba champions Kadriana Sahaidak/Colton Lott and Chelsea Carey/Colin Hodgson in Pool B; Jocelyn Peterman/Derek Samagalski in Pool C; and New Brunswick champions Julia Hunter/Alex Robichaud, who join Courtney/Carruthers at the top of Pool D. 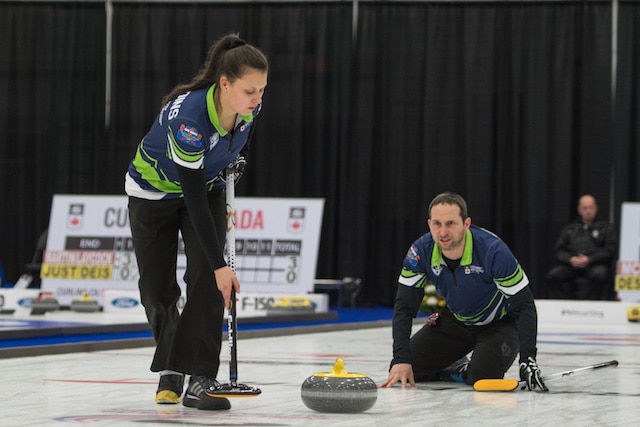 Other familiar names – Jennifer Jones/Brent Laing among them – are in the mix, and some, such as 2016 Canadian champions Marliese Kasner and Dustin Kalthoff, are still looking for their first win. Preparing for an event like this has its challenges, says Courtney, and for her, that means overcoming the fact that she and Carruthers don’t live and train in the same city: she’s in Edmonton, he’s in Winnipeg. “We each have our own mixed doubles practices and we talk leading into an event about what shots we want to make sure that we’ve got dialed in, and what our weaknesses are and how we can sharpen them up. If we have any tendencies, we try to share them with each other. So we do the work kind of long distance, but certainly it’s an advantage for the teams who get to practice together,” says Courtney. And that magic has been evident in a few of the teams hanging around the top of the leaderboard. Val Sweeting, for instance, is playing with Ontario’s Tim March, since her usual partner, Brad Gushue is on his way to Las Vegas to compete as Team Canada at the Men’s World Curling Championships. Sweeting and March sit at 3-1 after dropping their first game on Thursday, an 8-7 loss to Peterman/Samagalski. “There’s a little bit of magic to mixed doubles, when you find the perfect partner for what you need at the time,” says Courtney. “And you can see it in the teams that get thrown together last minute and they start to get on a roll and it starts to gel and then other teams may struggle a little bit and you can kind of how it’s tough to salvage sometimes when you’re not quite sure what each other needs, so it’s really fun to watch the different partnerships form and to see these teams grow. It’s great for the team.” As for Courtney, the success she and Carruthers have achieved – winning the Canadian championship in 2017 and representing Canada on the world stage – speaks to the connection they’ve developed as teammates and friends. “I love playing with Reid,” she says. “He’s such a nice guy, he loves the sport, and he’s a really supportive teammate.” Courtney already has lots of success with her other team – playing second for Rachel Homan and winning provincial, national and world titles, not to mention representing Canada at the 2018 Olympic Games in Pyeongchang. But when it comes to mixed doubles, she knows exactly who brings out the best in her. 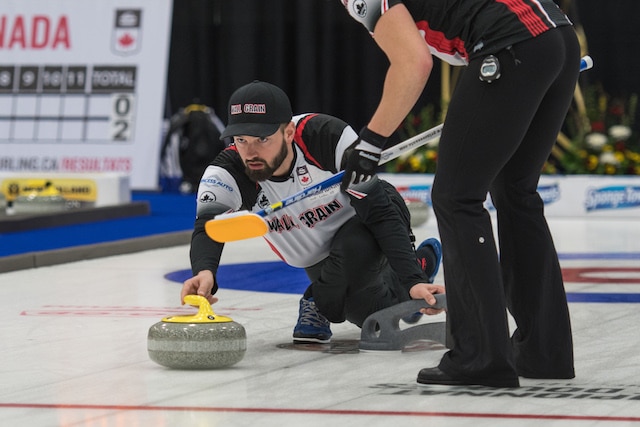 “I’m getting more comfortable throwing the last rock, but he really helps set up the shot for me, tells me what the path I need to throw it, and if I miss, he’s never mad,” she says. “He’s just the perfect teammate for me. He really spoonfeeds it.” Pool play continues on Friday with draws at 10:30 a.m., 1 p.m., 3:30 p.m., 6 p.m., 8:30 p.m. and 11 p.m. (all times EDT). CBC will be live streaming games from the mixed doubles championship until the weekend, then broadcasting playoff games on the CBC television network. Go to https://www.cbc.ca/sports/olympics/winter/curling/broadcast then click on the “CBC Television” tab beside the “CBC Sports Streaming” for the CBC TV schedule. Find scores, news and teams on the event website here: https://www.curling.ca/2018mixeddoubles/