Laura Crocker and Kirk Muyres will be wearing Team Canada jackets at the world championship in Östersund, Sweden, after defeating Kadriana Sahaidak and Colton Lott, 8-7, in the finals of the 2018 Canadian Mixed Doubles Championship today in Leduc, Alta. It was a battle from start to finish, with the young Manitoba champions from Gimli falling behind early and fighting back to lead 7-6 heading into the final end. Crocker’s final take-out sealed the win. “I’m thinking about everything but what would happen if I made it,” said Crocker about getting in the hack to throw her final, game-winning shot. “So I just tried to really fall back on my process, made sure I took my time and didn’t rush anything, and I knew out of my hand I’d be close if I did that.” “Laura made a couple of pistols late to keep us in it,” said Muyres. “She’s a winner. I’m glad to be (throwing) before her.” 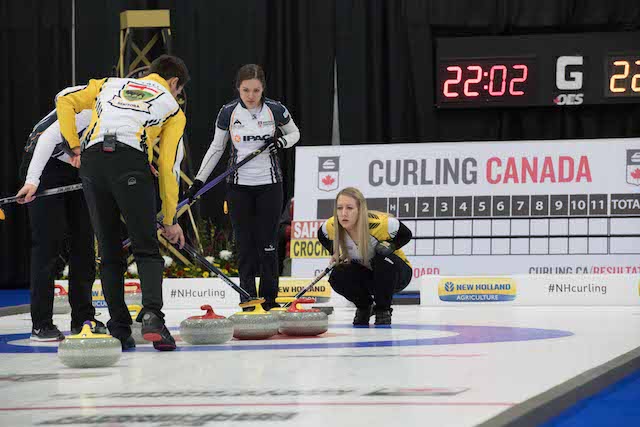 Manitoba’s Kadriana Sahaidak and Colton Lott, along with Laura Crocker and Kirk Muyres, in action during the final of the 2018 Canadian Mixed Curling Championship in Leduc, Alta. (Curling Canada/Cameron Chisholm photo)

Crocker brought her experience as the 2016 Canadian mixed doubles silver medallist (with partner Geoff Walker) to the championship final. She and Muyres connected when it became possible that Walker would be away competing with Brad Gushue and Team Canada at the men’s worlds in Las Vegas. “I thought I was going focus this year on men’s, on the Olympic Trials, and maybe get into (mixed doubles) down the road,” said Muyres. But he agreed to play a mixed doubles spiel with Crocker and loved it. “Every time we’d go out to play a game here, even through the playoffs, I’d say ‘I want to play one more game’ cause it’s so much fun.” Sahaidak and Lott came into the final as the only undefeated team in the competition, an amazing accomplishment considering that they are also the youngest team at the national championship, and Sahaidak is playing in her first national event. The nerves may have accounted for some problems with draw weight, as a few missed draws by the Manitoba champions didn’t allow them to set up the end effectively. Lott used his greatest weapon – the big-weight take-out – to get his team out of trouble more than once, but he and Sahaidak found themselves chasing for much of the first half. They made it close, but in the final end, Crocker had an open hit for the win, and she made the most of it. Earlier on Sunday, Sahaidak and Lott defeated Chelsea Carey and Colin Hodgson 7-3 in one of the semifinals, while Crocker and Muyres knocked off the 2017 champions, Joanne Courtney and Reid Carruthers, 9-4. Next stop for Crocker and Muyres is the World Mixed Double Curling Championship, taking place April 21-28 in Östersund, Sweden, and both say they can’t wait to put on their Team Canada jackets. “There’s no other feeling like it, and if I say much more about it I might get emotional,” said Crocker, who represented Canada at the 2010 World Junior Curling Championships in Sorel-Tracy, Que., where she won the gold medal. “I remember being able to put that on the first time and dreamt about it every day since and to be able to do it again in a few weeks in Sweden, it’s about as good as it gets,” said Muyres, who competed at the 2011 World Junior Curling Championships. “To go and wear the Maple Leaf is one of the coolest experiences ever. I can’t wait to get over the Sweden and go do it.” Visit the event website for news, scores, standings and team info: https://www.curling.ca/2018mixeddoubles/