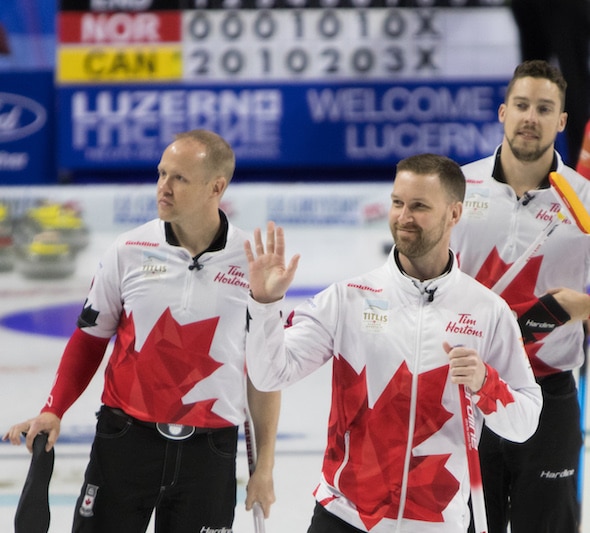 With the win, Canada improved to 6-1, tied with Scotland’s Bruce Mouat and trailing only Sweden (7-1), which got back on track Wednesday morning with a 9-4 win over Italy’s Joel Retornaz (2-5).

“It was a good game; I thought last night (a 9-2 win over Japan) and today, it felt kind of the same,” said Gushue. “We felt good out there, we threw the rock well, we had a good read on the ice, and a good result.”

Canada has enjoyed last-rock advantage in the first end for six of its seven games (CLICK HERE for a look at the current Draw Shot Challenge rankings), and in all six of those games, it has managed to score a minimum of two points in the first end (and, in the game the Canadians DIDN’T have first-end hammer, they stole one in the second and and two more in the fourth).

It was the same thing against the Norwegians, as Canada opened with two in the first end, and then stole a single in the third thanks to a wonderful hit-and-roll behind cover from Gushue that snuffed out a potentially big end for Norway. Walstad was forced to draw to the four-foot and was light on his attempt — the turning point of the game.

“Well, it was a scary shot,” said Nichols of the backline-weight hit-and-roll. “They had us on the ropes that whole end, and lucky for us, Brad came up big. We were fortunate to get out of that end with a steal, which completely turned the game around.

“There was no panic; just a feeling of, ‘This is what we need to do.’ Everyone did their jobs correctly; sometimes it doesn’t turn out, but lucky for us on that shot, it did. You could see the dejection in their team because they knew they had a big end coming, and we were able to turn it around, and then it’s 3-0 for us, instead of 3-2 for them if we don’t make it.”

Norway finally hit the scoreboard in the fourth with a single, but Gushue padded the lead with two in the fifth on his short angle-raise takeout — an end that featured a rare throw-through from Nichols, as the Canadian team agreed that Nichols putting a rock in play could have helped Norway more than Canada.

“Geez, I’d love to throw some rocks through,” joked Gushue after the game.

Gushue made an open hit for three in the seventh end to prompt handshakes as Norway dropped to 6-2.

Canada is back on the ice later on Wednesday, against Jaap Van Dorp of the Netherlands (1-5) at 9:30 p.m. (all times Eastern). 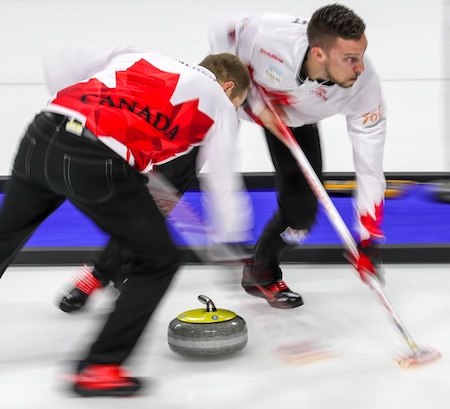 “Certainly, from the first game to now, we’ve just been getting better and better, which is a good progression,” said Gushue. “I think a lot of that comes from comfort with the ice. There was a little bit more curl today after they scratched (sandpapered) the rocks last night, and the ice was even faster, which was an added bonus. It suited our team and our style of play.”

In other Wednesday morning games, Scotland was a 7-2 winner over South Korea’s Chang-Min Kim (3-5), and Russia’s Alexey Timofeev (5-2) scored two in the 10th end for a 7-6 win over Rich Ruohonen of the United States (1-6)