Potential future Canadian, world and Olympic champs will be showing off their talent when the second Canadian Under-18 Boys and Girls Curling Championships get underway in Saint Andrews, N.B. 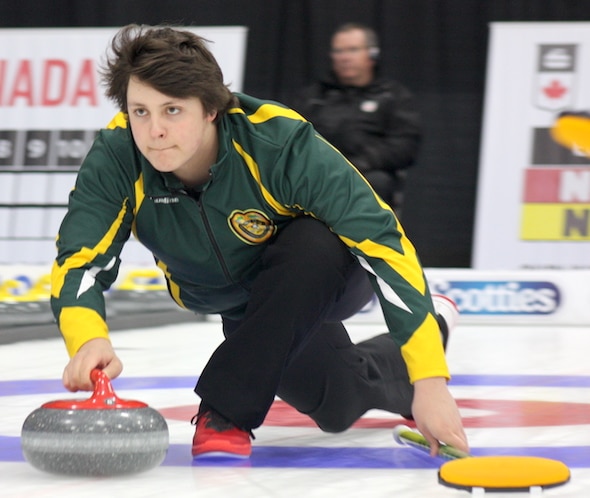 Jacob Horgan’s Sudbury team will be back to defend the gold medal it won at the inaugural Canadian Under 18 Boys and Girls Curling Championships. (Photo, Curling Canada)

The event, for players ages 17 and under as of June 30, 2017, will be staged at the W.C. O’Neill Arena Complex, using both a hockey arena and the three-sheet Heather Curling Club, which is part of the complex, and will feature teams from 13 Member Associations in each gender (Nunavut did not enter teams, while the Yukon did not enter a boys team).

And while many of the players will be unfamiliar to curling fans across Canada, some last names will be very familiar.

On the girls side, Team B.C. from Vernon is skipped by Jaelyn Cotter, the daughter of seven-time Tim Hortons Brier participant Jim Cotter, who is coaching the team.

B.C.’s boys team, skipped by Dawson Ballard and hailing from New Westminster and Coquitlam, also has some championship bloodlines. Second Joshua  Miki is the son of Bryan Miki (who coaches the team); Bryan played second on Greg McAulay’s team that won the 2000 Brier and world men’s championships.

Round-robin competition at both facilities will begin Monday at 6 p.m. (all times Atlantic).

Selected games from the 2018 Canadian Under-18 Championships will be streamed live for viewing on-line. Go to the event website, www.curling.ca/2018under18/, for links and more information.

Additionally, the teams that don’t make the playoffs will take part in a mixed doubles competition.

For information on team lineups, schedules and tickets, go to the event website: www.curling.ca/2018under18/.