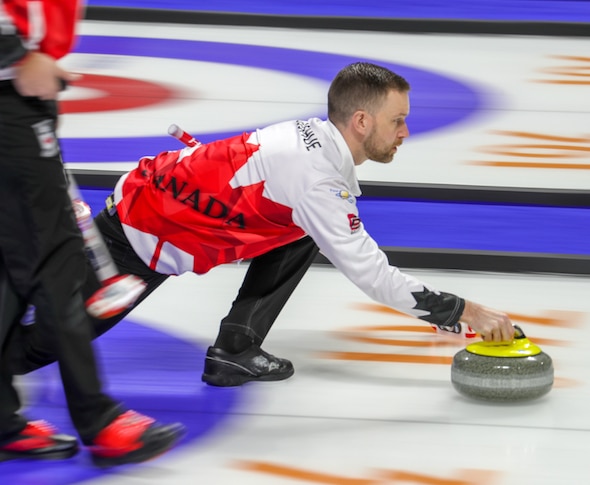 A win there will advance Team Canada, 9-3 in the round robin, to the semifinal later Saturday at 9:30 against Scotland’s Bruce Mouat (11-1).

And a win there would put the Canadians into the gold-medal game for a second straight year.

An efficient 8-1 win over Germany’s Alexander Baumann (1-11) Friday night at Orleans Arena was cause for optimism.

“I think we’re ready, I really do. When the bell rings tomorrow and it’s do or die, we’re going to come out and we’re going to be tough to play against,”  said Gushue, who was scored at 90 per cent Friday night against Germany. “Even though at this point we’re not firing on all cylinders, it can turn at any point, and if it does turn tomorrow, we can win this thing. It will turn. We won’t go as long as we have without being the best versions of ourselves. Hopefully it’s tomorrow.”

Canada was in total control against Germany, despite not having last-rock advantage in the first end.

With Sallows in the lineup to start the game at lead, Canada stole single points in the first, second and third ends, and added a stolen deuce in the fourth. Walker came into the game for the fifth end, replacing Nichols in the lineup (Walker threw second stones, while Gallant moved to third).

The Germans broke the shutout with one in the fifth, but Gushue’s draw for three in the sixth prompted handshakes.

“It was a good game; I thought we went out and executed our game plan,” said Gushue. “I wanted to keep things interesting, put some rocks in play, The game didn’t mean a whole lot (in the standings), but I wanted to make sure we kept our draw weight and played some difficult shots. And it was fun to get Tom in the lineup. It was nice for him to have that opportunity.” 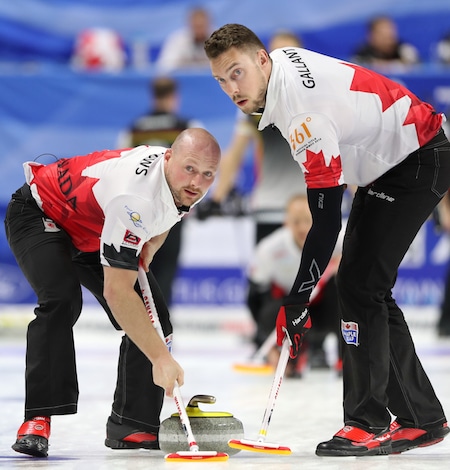 Tom Sallows, left, got into the lineup on Friday night, and was working alongside Brett Gallant. (Photo, World Curling Federation/Richard Gray)

Suffice it to say, the 2018 world men’s championship has been a different journey than the one Team Gushue took last year in Edmonton, where it went 13-0 en route to gold.

“Obviously, it’s been a little bit of a struggle, in our minds, but if you look at our numbers, we’re still shooting pretty well, and we’ve obviously had a lot of teams bring their ‘A’ games against us,” said Walker. “But I think we’ve built some pretty good momentum. I think we’re all looking forward to getting out there and showing everybody what we’re made of. You haven’t seen that yet. There have been glimpses, but not a full game.”

The playoff brackets were completed for the first six-team playoff tournament in World Men’s history.

While third-place Canada is taking the sixth-place U.S., which clinched its playoff spot with a 5-3 win over Switzerland’s Marc Pfister (6-6), fourth-place Chang-Min Kim of South Korea (7-5) will play fifth-place Steffen Walstad of Norway (7-5).

All of Canada’s games are being broadcast by TSN. Go to www.tsn.ca/2017-18-curling-broadcast-schedule-1.593081 to see the broadcast schedule.