Canada’s Laura Crocker and Kirk Muyres kicked off the 2018 World Mixed Doubles Curling Championship with a comfortable 12-0 win over Ireland in Östersund, Sweden, this morning. 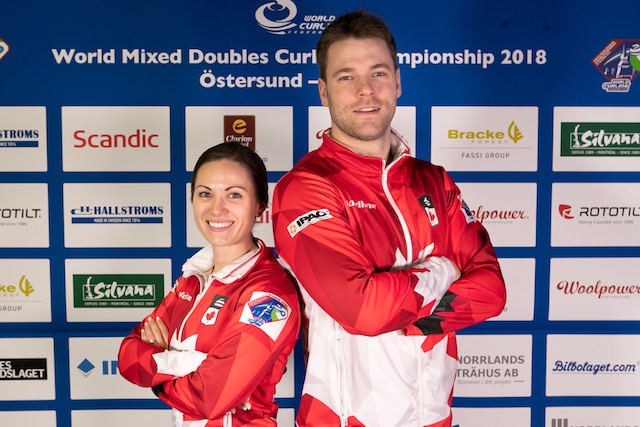 The dominant performance began with a score of five in the first end, as the Canadian champions loaded the four-foot with rocks and put the pressure on the Irish duo of Jen Ward and Eion McCrossan right from the start. Crocker and Muyres went on to steal the next five ends and the game was conceded after six. “It was exciting,” said Muyres afterwards. “Before the game, Jeff [Stoughton, coach] asked us if we were nervous and I said ‘yeah, I’m nervous and excited.’ That’s usually a good thing when you can get the butterflies rolling. We were excited to get out there – it was a couple days waiting and waiting for it. Definitely nervous throwing that first draw to the button but it was fun.” The Canadians will play twice on Sunday, facing Austria’s Anna Weghuber and Markus Schagerl at 8:30 a.m. ET and Brazil’s Aline Goncalves and Marcio Cerquinho (who are coached by Canadian Wade Scoffin) at 3 p.m. ET. Follow the scoring on the World Curling Federation website, www.worldcurling.org/wmdcc2018. Selected games at the 2018 World Mixed Doubles Championship will be live-streamed on the World Curling Federation’s YouTube channel. Round-robin play goes through Thursday, with the playoffs starting Friday. Go to www.worldcurling.org/wmdcc2018 for information on the draw and a list of teams. The gold- and bronze-medal games are scheduled for Saturday, April 28, at 10 a.m. ET.