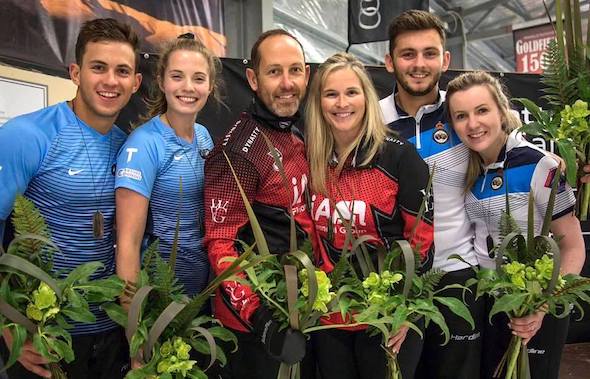 The tournament was also the first event of the northern season’s World Curling Tour, and was the first WCT event to ever be held in the southern hemisphere.

“That was not our best, a few too many misses,” said Jones after the medal ceremony. “But we found a way to make a big shot when we had to. We held ourselves in the game, never really felt like we lost control of it and that’s always key.”

“We’re confident in each other,” Laing continued, “and confident in what we do – but you have to prove that every single time you play. And while we were also confident that Scotland would play well, they made just a couple of uncharacteristic misses. We played a really good first end and got a big lead. It was fortunate that we did, because we used it up.”

“We had a better second half, Jen made some really big shots, including that huge draw for one against four (Scotland stones) in the third. But it’s mixed doubles, lots of stuff happens and you just have to react to it and see if you can turn it around in the next end.”

Jones and Laing posted a perfect 8-0 record en route to the gold medal, Canada’s second at the event. In 2015, Kalynn Park and Charley Thomas captured top spot, and were silver-medallists last year.

Scotland’s Fraser Kingan was disappointed but philosophical about their loss.

“If you’d told us at the start of the week that we’d make the final and lose to that Canadian couple we’d have been quite happy,” he said.

“It was probably our best game of the week. We had a poor first end, and missed a nose hit for 3 in the sixth, and that was about it. We’re quite happy, it was just one of those games, there were quite a few missed shots from both sides. But there were a lot of good shots made as well.”

“We really enjoyed it,” added Jayne Stirling. “It’s been great to play against them twice this week, really great. We’ve learned a lot from it, and for our first event of the season – a silver medal is great.”

The U.S.’s Sarah Anderson and Korey Dropkin had control throughout the bronze medal game to beat Norway’s Maia and Magnus Ramsfjell 8-1.

Dropkin commented, “We’re feeling pretty good. We were a little disappointed after this morning’s (semifinal) match, especially with how close it came down to. But for us the biggest part was just refreshing and refocusing on winning the bronze medal for the U.S. this afternoon, so we’re pretty pleased with how we played.”

“We just had to make sure we were up for it mentally,” said Sarah Anderson, “especially coming up against a team as strong as Norway.”