The calendar has turned, the kids are back to school and although it still feels like summer in much of the country, curling season is underway. Two major World Curling Tour events are being hosted this weekend. The Stu Sells Oakville Tankard (Ontario) features both men and women, while the HDF Insurance Shoot-Out in Edmonton is strictly a women’s event. 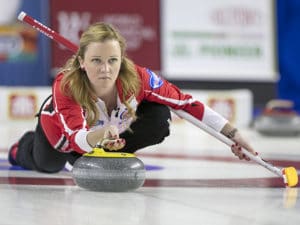 Chelsea Carey will be one of several skips testing out their new lineups this weekend at the HDF Insurance Shoot-Out in Edmonton. (Photo, Curling Canada/Andrew Klaver)

In each event, several newly-formed teams will make their debuts. In Edmonton, Chelsea Carey (Edmonton),  Allison Flaxey (Winnipeg), Kelsey Rocque (Edmonton), and Laura Walker (Edmonton) are hitting the ice for the first time with new lineups. The 15-team field will play a round robin in three pools before moving on to the playoffs and the chance to fight over a $32,000 purse. In Oakville, Kerri Einarson (Gimli, Man.) and Jacqueline Harrison (Toronto) have new teams, while on the men’s side John Epping (Toronto), Matt Dunstone (Regina) and  Charley Thomas (Toronto) are testing out their new squads. Teams from China, Japan, Netherlands, Russia, Scotland, Sweden, Switzerland and USA have all made the trip to Oakville for added international flavour. The Stu Sells Oakville Tankard features 26 teams in each of the men’s and women’s draws and each side is competing for a share of a $25,000 purse. For some teams, this is already their second or third event. Dunstone, with vice Braeden Moskowy, second Catlin Schneider and lead Dustin Kidby, lost the final at last week’s Oakville Fall Classic to Japan’s Yuta Matsumura earning $2,000 and his first 30.822 points on this year’s Canadian Team Ranking System. Sayaka Yoshimura, also from Japan, won the women’s side beating Ottawa’s Erica Hopson. She bested a field featuring Russian Olympian Anna Sidorova, and five-time Scotties Tournament of Hearts winner Mary-Anne Arsenault (Dartmouth, N.S.). One week earlier, Norway’s Thomas Ulsrud bested Sweden’s Niklas Edin in the final of the Baden Masters, an event that featured no Canadian entries. During the same week, Winnipeg’s Braden Calvert beat Olympic champion John Shuster (USA) in the Goldline Icebreaker at the Granite Club in Winnipeg, while Darcy Robertson (Winnipeg) beat Sidorova for the women’s title.