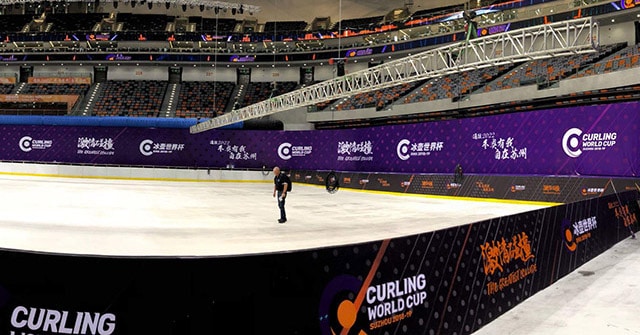 The Canadian teams selected to compete will provide fans with a little bit of old and new. The new-look Kevin Koe (Calgary) team is making its debut at the Suzhou Sports Centre in the men’s competition. Rachel Homan (Ottawa) returns this season with the same lineup, representing Canada in the women’s competition. Laura Walker (formerly Crocker; Edmonton) and Kirk Muyres (Saskatoon) are Canada’s mixed doubles team.

Each competition will field eight teams in two groups of four, with teams playing a double round-robin within their pools from Sept. 12-15. The top teams in each group move into the finals on Sept. 16.

View the full schedule and all teams competing by CLICKING HERE.

It will be the first time curling fans can see Koe’s new lineup in action. The two-time world champion skip retains Ben Hebert at lead while adding Colton Flasch at second and B.J. Neufeld at vice-skip. Koe’s in a group with 2018 Olympic bronze medallist Peter de Cruz of Switzerland, 2018 world men’s bronze medallist Bruce Mouat of Scotland, and Masaki Iwai of Japan. The winner of that group earns a berth to final to play the winner of the opposite group featuring 2018 world champion and Olympic silver medallist Niklas Edin (Sweden), Rich Ruohonen of the United States, and Norway’s Steffen Walstad.

Rachel Homan, vice-skip Emma Miskew, second Joanne Courtney and lead Lisa Weagle begin the new Olympic quadrennial at the Curling World Cup. The 2017 world champions will play two games against Russia’s Anna Sidorova, which is the team Homan beat in that year’s world women’s final. Rounding out the group is Minji Kim of South Korea and Nina Roth of the United States. The other group features defending Olympic gold-medallist Anna Hasselborg (Sweden) and 2018

All games at the Curling World Cup are eight ends. Games tied after eight ends will be determined by a draw to the button.

The new Curling World Cup is operated by the World Curling Federation (WCF) and consists of four events throughout the 2018-19 curling season. The winner of the men’s and women’s competitions will receive $20,000 (all dollar figures US) plus $1,500 for each round-robin win. The winner of the mixed doubles competition receives $10,000 plus $750 per round-robin win. Winners also earn a berth to the Curling World Cup Grand Final, occurring in Beijing from May 8-12, 2019.

The WCF will live-stream selected Curling World Cup games on its Youtube channel.